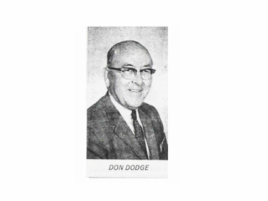 (This was the twelfth in a series of interviews conducted by M. Sandy Blakeman and printed in the Mellus Newspapers in the 1950s).

After 30 years of selling and appraising real estate in the Downriver area, Don Dodge looks to the future development of the district with the same optimism that influenced his decision to become associated with the Underill Agency in the early twenties.

Dodge came to Detroit in 1916 from Bluffton, Ohio, to work as a machinist and toolmaker in Detroit’s auto industries. He began his real estate career in Detroit and became affiliated with Ellis (Duke) Underill in 1925. Dodge is a member of the Downriver Chamber of Commerce and also serves as a member of the board for the Guarantee Savings & Loan Company.

There is still no limit to the future possibilities of Downriver real estate from the standpoint of investment and development, Dodge believes.

“It was no accident that the pioneer Frenchmen selected Ecorse as a site for settlement some 200 years ago,” Dodge mused. “Geography favored Ecorse. The Detroit River offered the only means of transportation for these early settlers and they were the first to see in the waterway the potential that has since made the Downriver area one of the greatest industrial centers in the world.”

The same potential still exists, Dodge adds, “and the future is even brighter than at any time in the history of the area. Now that the St. Lawrence Seaway is no longer a dream but has been approved by the governments of both the United States and Canada with construction to start within the year, who can predict the tremendous effect this project will have on industrial expansion and increased real estate values?”

When asked to comment on the effect the St. Lawrence Seaway will have on the home owners, Dodge remarked, “In addition to natural advantages of industry the area also provides sound real estate investment opportunities and home ownership advantages unsurpassed in any other industrial area.”