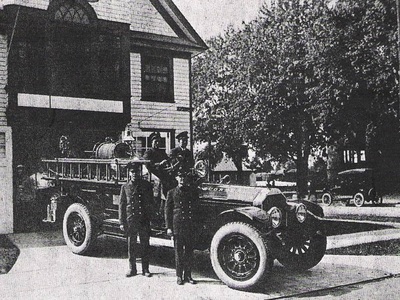 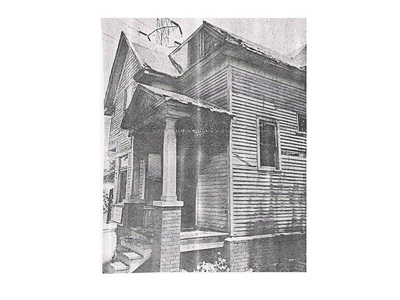 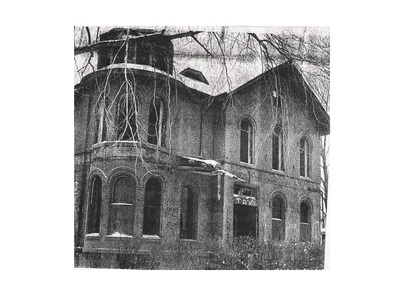 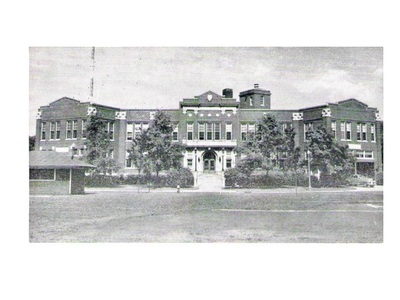 Old City Hall
Old Village Hall To Be Torn Down

An article in the Ecorse Advertiser of August 20, 1948, announced that within a few weeks one of the Downriver area's oldest landmarks, the old Ecorse Village Hall, would remain alive in memory only. At a recent council meeting, Ecorse councilmen asked for bids to tear down the venerable old hall.

Built in 1899 at the corner of High and Labadie Streets almost fifty years before, the hall had been in constant use for nearly 50 years. For more than ten years the building had been recognized as a hazard and a fire trap, but the city of Ecorse was forced to use it for its repair garage. Now, with a new garage completed and nearly ready to be occupied, the old city hall was slated to be torn down.

When the Village Hall was built, Barney Sutliff, veteran Ecorse building contractor, was the foreman on the job and the late L.N. Beaker, constructed the hall. It once housed the police and fire departments as well as the various city offices. It originally had a 60 foot tower, but it was removed several years ago.

Still in the old fire department hose tower was a brass bell, weighing nearly a half ton. Years ago the bell was used to peal out its call for the village's volunteer fire fighters, but it stood mute for nearly twenty years, with one exception. when the news of Japan's unconditional surrender flashed through Ecorse in August 1945, city employees rigged up a rope to the old bell tower. Once again the brass voice boomed out, but fearful that the entire building would collapse, the workers hurriedly stopped the bell ringing and left the tower.

The old Ecorse City Hall stood at Cicotte and High Streets from the 1920s until 1973.

It served for years as the city hall until the new Civic Center on West Jefferson Avenue was completed. Just prior to its demolition, a few city departments maintained offices in the building.

The Fish Pond By The Fire Station

In 1938, Ecorse Fire Department personnel built the fish pond that stood alongside the old Ecorse Fire Station on High Street near Cicotte.

I used to stop by the fish pond every day on my way back to School One after I went home for lunch. The water glistening in the sunlight and the pennies shining on the bottom fascinated me.

In January 1970, the Salliotte family homestead at High Street and Southfield was demolished.

It was an Ecorse landmark and one of the oldest houses in the city.

Fire partially destroyed a familiar West Jefferson landmark in Ecorse on Monday, July 15, 1974. The landmark, called "the Weigh Station," was a large Victorian style century old house that sat on property owned by Reuben Grevnin near West Jefferson and Cicotte and the railroad tracks that cross West Jefferson.

Charles Ouelette, a carpenter in Ecorse, built the house around 1874. His grandson, Donald Ouellette who was an assistant engineer in the city of Ecorse engineering department in 1974, said that his grandfather built the house by himself about one hundred years ago. The house was originally built just south of its 1974 location along Jefferson and the Detroit River front, approximately where a boat livery presently stood. The Ouellette family sold the house to Grevnin in the 1930s, and he moved it to its present location.

Assistant Fire Chief Milton Montie said that the fire started in a closet in the building and the cause hadn't yet been determined.

Other Ecorse Buildings Gone, But Not Forgotten!

Miss Goodell's house on the corner of Goodell and Jefferson was another important part of my childhood neighborhood. Bob Zawoysky, one of the boys in our neighborhood Thunderbolt's Gang, used to do yardwork for her and she would allow us to play hide and seek in her yard in the long summer twilights.

My Grandmother Covert's house is also gone. We used to live right across the street from her, on Pitt Street, and I'm certain that we drove her crazy running in and out of the house all of the time. She was always good for a dime for a popsickle or fudgesickle from Pomograth's Market, a hop across the alley from her backyard.

The old grade schools - one, two, and three- are gone and so is the old Ecorse High School. The new school is much fancier but I miss the old high school. It had personality and there are a lot of memories in that old building.

Ecorse Presbyterian Church is gone, but St. Francis Xavier is still there. I was about ten years old when they build the St. Francis Xavier Church on Jefferson Avenue. I can remember playing with my friends in the piles of dirt and climbing up on the concrete platform to curl up with a book and read in the sunshine.

Ecorse Public Library is still there, too.  I spent  a lot of happy hours reading at that library and checking out books.  Does anyone remember the pipe fence that used to be in front of it. One of the biggest challenges of my childhood was trying to walk its entire length without falling off.  I managed to negotiate it a few times.
Kathy Covert