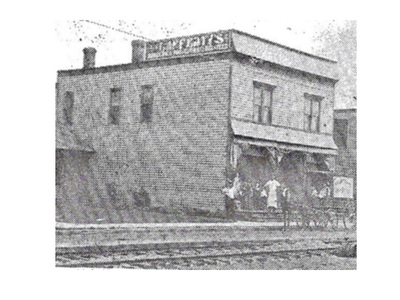 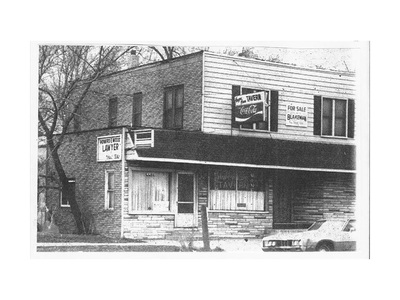 Despite a building boom that has seen thousands of new homes and business places constructed throughout the Downriver area, there still can be found buildings that date back nearly a century.

In Ecorse, one of the oldest settlements in this part of Michigan, hundreds of men and women patronize a tavern located in a building which has remained virtually unchanged for nearly 80 years.

This week, Frank Rogers, Mellus Newspaper staff photographer, stood on the same spot and with a more modern camera, snapped a picture of the same view.

Lafferty, a peppery Allen Park official, who is not afraid to reveal his age, is quick to point out that he was three years old when he stood in front of the camera on the front steps of his father’s general store.

The late Frank X. Lafferty was a power in Ecorse Township politics for generations and for many years ran the general store in the pioneer village.

As can be seen by the old picture, what is now busy Jefferson Avenue was once a narrow brick street with the rails of the Detroit United Railway interurban street car line running along the edge of the highway.

Lafferty recalls how the streetcars halted in front of the building for unloading of crates and barrels of merchandise that were offered for sale.

Other things were shipped by freight cars on the old Michigan Central Railroad or by boat from Detroit. The cargo was unloaded either at the State Street (now Southfield) dock in Ecorse or landing at the foot of Oak Street in Wyandotte.

Teams of horses delivered goods to the inland farms which have long since become the bustling communities of Allen Park, Lincoln Park, Melvindale and Southgate.

Standing in front of the store is a delivery wagon which was pulled by the faithful old mare, Nance.

“Dad operated the old time general store-the kind you see today in such places as Greenfield Village. He stocked everything you could think of, and if he did not have it he would order it for his customers.

“We delivered everything in those days but the final blow came when a woman called and wanted us to hitch Nance to the wagon and deliver a single spool of thread,” Lafferty recalled.

The elder Lafferty closed the general store but continued to operate a grocery and meat market. After his death, his son Charles ran the business until he joined the Ecorse Fire Department. Charles retired in 1974 as chief of the department.

The Lafferty family had a soft spot in their hearts for their faithful horse and recalled that she lived to be 24 years of age.

Two Ecorse officials have undertaken a whale of a job as the city gets ready to observe the nation’s 200th birthday.

City Assessor Elmer Labadie and Purchasing Agent James Lawrence are heading a committee that intends to publish a Bicentennial history book, but already they are learning that they have a job cut out for themselves.

Labadie’s roots go away back – his great, great grandfather, Alex Descompte Labadie-was granted land in what is now Ecorse in 1701. The land grant was issued by King Louis the XIV of France back in the days when all of the present day Downriver area was a part of the Province of Quebec in the colony of New France.

The two men are learning something this writer discovered many years ago-finding information about the historical old community does not come easy.

Almost30 years ago the late William W. Voisine, Ecorse mayor, named this writer the city historian- an unpaid position with no office space to store records or funds to acquire and preserve old maps, photographs or archives. In attempting to compile a history of the old community, researchers must depend upon local legends – often impossible to document- or try to gather historical tidbits from old land deeds, frequently handwritten in French.

Old photographs and maps must exist somewhere, but they probably are tucked away in attics where the present day owners are either unaware of their existence or reluctant to part with them.

The one single factor that hampers all researchers is the lack of written records. For example, it is known that a hamlet of sorts existed at present day Southfield and Jefferson before the United States came into being, and old timers have often theorized that explorers and missionaries may have halted along the shores as far back as 1679.

On July 24, 1701, Cadillac landed in what is now Detroit, and the French ruled the territory for the next 59 years before losing it to the British at the close of the French and Indian Wars.

Many of the descendants of the early day settlers trace their origins to the strip of ribbon farms that extended from as far away as Lake St. Clair to the present-day Wyandotte limits.

Following the War of 1812 when the British flag was hauled down for the last time the little settlement was known as Grand Port.Grand Port, which existed before Michigan became a state, had streets which remain in their present location to this very day.

An 1820 map, located in the Burton Historical Museum in Detroit, gives an indication as to the age of the community by listing Revolutionary War era heroes as thoroughfares. Streets were named for Jefferson, Monroe, Webster and Jackson as well as French settlers St. Cosme, Labadie and LeBlanc.

In 1827, when Ecorse Township was established, the name Grandport faded from the picture and the settlement gradually became known as Ecorse.

It was not until 1902, more than a century after the first settlers landed on the shores, that Ecorse officials got around to incorporating as a village.So, one can only rely on 74-year old written records to get an official version of the early day workings of the community. Township records, which dated back for 131 years, were lost when Ecorse Township was dissolved in 1958 with the creation of Southgate.

In searching for information about Ecorse’s colorful past, Labadie is attempting to determine which is the oldest building in town.In his official capacity as assessor, he has access to records that date back to the earliest days of the Downriver area. Labadie has discovered what he thinks to be the oldest buildings in the Downriver area. They are the old San Succi farmhouse on Pepper Road, and an old brick dwelling located behind a drug store at West Jefferson and Labadie.

Legend tells us that Manhatten Islandwas traded by Indians to early Dutch settlers for a barrel of whiskey and a few trinkets worth $24 – probably the greatest bargain in history.

The annals of the Downriver area tell of a land transaction on a much smaller scale which enabled Ecorse to become one of the wealthiest cities of its size in the nation.

Ecorse was a y ear old village in 1903 when negotiations were begun with officials of neighboring River Rouge to straighten out the jagged boundary between the two communities. Faded, hand-written minutes of Ecorse Village Council meetings tell that “council hed a meeting with the River Rouge village officials in regard to the boundary line between the two towns, etc.”

As a result of the negotiations, River Rouge officials agreed to trade a large section of swampland and marshes along theDetroit River for Florence, Elizabeth, LeBlanc and Cora Streets.

Charles Lafferty, Ecorse fire chief and a descendant of the early day French settlers, recalled hearing how Rouge officials danced with glee after Ecorse councilmen agreed to the transaction, figuring that they had traded worthless swam for valuable residential property.

Today, survivors of that early administration must look back with regret on their “shrewd” bargain. The worthless swamps and marshes are the sites of industrial installations with assessed valuations totaling more than $200,000,000.  Included are the sprawling Great Lakes Steel plants, Dana Corporation, Nicholson Terminal and Dock, the switching yards of the Detroit, Toledo and Ironton and Penn Central Railroads, and the slag-producing operations of the Edward C. Levy Company. These firms last year paid nearly two million dollars in taxes to Ecorse.

By contrast, the streets given up by Ecorse now have only a few dozen aging houses, whose tax potential is decreasing yearly. Oddly enough, the land swap did not really clear up the boundary confusion, for as new streets were platted and homes constructed, they often were located squarely on the line between the two communities. There are people living in this area today who sleep in River Rouge, cook their meals in Ecorse and pay taxes to both communities. In a similar manner, there are persons who vote and use Ecorse as their mailing address, but actually live inLincoln Park.

Street pavings, creek relocatings and freeway construction have created similar problems throughout the area served by The Mellus Newspapers, as portions of Melvindale,Allen ParkandLincoln ParkfollowOuter Drive.

One of the most humorous aspects that used to cause confusion was in Southgate. Veteran police officers recall that a tavern is in Wyandotteon Fort near Eureka, but if an unruly drunk is tossed out onto the sidewalk, he will land inSouthgate.

Getting back to the historic land exchange, there are many descendants of the first Ecorse village council members living in the Downriver area today. They probably have heard how the Ecorse Frenchmen “skinned” the River Rouge Frenchmen with their “horse-trading.”

The names of the early day officials can be found on many streets that since have sprung up in the “new” communities of Allen Park, Lincoln Park, Melvindale, Riverview, Southgate and Taylor.