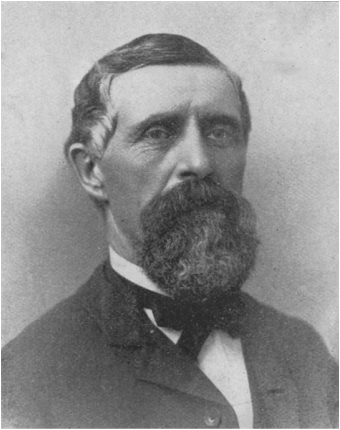 Alexis M. Salliotte
George Behrling was born in Germany, March 30, 1823. He came to America in 1848 and settled in Wayne County. Since 1861he has lived in Ecorse, on a farm purchased at the time. He married Mary Mettie; they had two children, both died in infancy.

The 1880 census shows that several families from Prussia settled in Ecorse, including Christopher Volt, Henry Winter, Edward Lang, Henry Stubby, Frederick Smith and their families and the Jonks family.

John Boehle was born in Prussia, June 24, 1824. He came to America in June 1852 and settled in Detroit where he resided until 1857, when he moved to Taylor on a farm of 80 acres. In 1883 he purchased a farm of 100 acres in the town of Ecorse. He was a school director for three years. He married Minnie Grote of Detroit in August 1852. They had eight children:  Augustus, Mary, Emma, John, Henry, Minnie, Albert and Edward.

Alex Campau was born in a small frame house on West Jefferson in Ecorse in 1844. The second son of Mr. And Mrs. Alexis Campau, his Ecorse consisted of woods inhabited by Indians and a stagecoach making its first runs between Detroit and Monroe.

As a child, Alex went to a little frame school house on Salliotte Road, with a handful of boys gathering to learn ‘reading, ‘riting, and’rithmetic. But by the time he was eight years old, his father died and he had to quit school to work in the fields and help his mother in the house. She rented rooms to men who came to work on the laying of the first railroad line through the area – the old Lakeshore railroad. An Indian who was helping to build the railroad roomed at Mrs. Campau’s house and he took and instant liking to Alex and the two were fishing partners and bedfellows during the time the Indians stayed at the Campau home. Alex was still small when he sometimes rode the stage traveling to Monroe from Detroit. The driver was his distant cousin, and Alex found the hot and dusty ride to Monroe thrilling. He enjoyed the overnight stay in the inn, listening to the tales of fellow travelers and rose at dawn to make the long homeward ride. He married Adis Salliotte and they lived in Ecorse the rest of their lives. He is buried in St. Francis Xavier Cemetery. (Ecorse Cemetery)

Louis Cicotte, merchant and manufacturer of flour at Ecorse was born in 1812. His parents were born at Detroit and settled in Ecorse in 1815. They had a family of ten children. His father served in the War of 1812. In 1847, Louis married Fanny Beaubien who was born in Detroit 1826. They had seven children. Mr. Cicotte was a supervisor for seven years and constable, and custom home officer for twenty years. He erected his hotel in 1866 and owned a farm of 37 acres of land which he purchased in 1840 at $10 per acre.

Thomas Richard Drouillard was born in Ecorse Township in 1878 and lived in Ecorse all of his life.He and his wife Stella had a son Ari and three daughters, Mrs. Thomas Bourassa, Mrs. Wilbur Ray and Mrs. John Bartonic.  For many years he served as an Ecorse policeman.

He died on on July 12, 1950, at his residence, 4520 Monroe Street. His funeral was held on Saturday, July 16, 1950, from St. Francis Xavier Church and the Gallagher Funeral Home.   Elijah Goodell and Family. Family tradition says that the first Goodell in America was Robert Goodell who migrated to Salem, Massachusetts in 1634 from England where his family had fled in the mid 1500s to escape religious persecution in their native France. Tradition has it that these early French Huguenots changed the spelling of their family name from Goodelle to Goodell. Elijah Goodell and his wife Achsah Pickert Goodell and their family migrated from the Mohawk Valley in New York to Canada and eventually settled in Ecorse. The Goodell family's log cabin home, one of the largest in Ecorse, served as a social, civic, and religious gathering place for the pioneer settlement. The Goodell family played an important part in Downriver history.

Abraham LeBlanc, a general farmer, was born at Ecorse, Michigan, October 17, 1820. His parents, Peter and Theresa Bourasson LaBlanc, settled at Ecorse in 1800. His father was born in France, was an extensive fur dealer, and fitted out for trading vessels. Abraham married Phyllis Perry in 1851. She was born in Canada. They had eight children. He owned 300 acres of fine farming land, and he was one of the active farmers in the Ecorse of his time.

Allen Nowlin, 26, farmer and Maggie his wife, 24, lived in Ecorse. They had a year and a half old son, William.

Gustave Raupp was born in Baden, Germany, in 1848. His father was born in 1819, and came with his family to America in 1851, and settled at Brooklyn, New York, where his wife died in 1870, leaving four children, William, Mathais, Gustave, and Herman. William enlisted Co. H, 6th Michigan  Infantry, reenlisted and died in Fort Donaldson in 1864.  Gustave married Selina Peyette in 1884. They had two children. He held the office of town treasurer one term and supervisor, two terms. In 1877 he established the business firm of Salliotte & Raupp, lumber dealers and manufacturers of stave and hoops. Salliotte & Raupp did an extensive shipping business, employing some 100 to 150 persons.

Alexis M. Salliotte was born in Ecorse township in 1837. His father, Moses Salliotte, was born at Ecorse in 1806. His mother Charlotte Cook Salliotte was born at Yorkshire, England. They had seven children. The grandparents settled at Ecorse in 1800. Alexis married May Rousson in 1867, who was born at Ecorse. They had  nine children.. Mr. Salliotte, in 1845, kept a grocery and general supply store. In 1859,  he manufactured boots and shoes. In 1877 he became a member of the firm of Salliotte & Raupp, engaging in lumbering and the manufacture of staves. In 1879 the mill was destroyed by fire, and a new steam saw and planning mill was erected with capacity of 50,000 feet in ten hours. They also had mills at Ashley and Lansing, Michigan, and were extensive shippers of pine lumber. Mr. Salliotte served as town treasurer one term, town clerk two terms and postmaster 16 years.

Joseph Salliotte, merchant and proprietor of the Ecorse flour mills, was born in 1840. He was the son of Moses and Charlotte Cook Salliotte. His mother died in 1856; his mother was born at Yorkshire, England. Joseph’s grandparents settled at Ecorse in 1800. His grandfather died in 1816, his widow in 1862. Joseph married Mary Moran, in 1862, who was born in Ireland. They had five children. He engaged in the butchering business in 1862, and in 1882 opened a general grocery and supply store. In 1884 he built his steam flour mill, roller process and was also engaged in farming. He served as the Justice of the Peace for eight years.