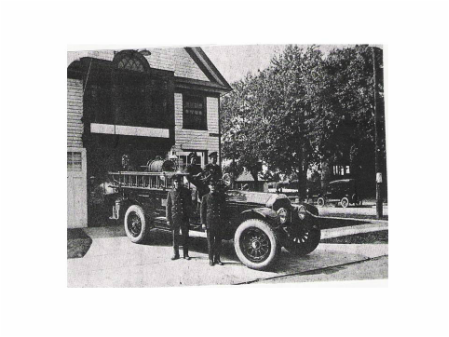 Ecorse Fire Department in the Old Village Hall, 1930s
Ecorse At A Glance, 1926

Ecorse Is Largest Village in the United States

The village of Ecorse and Ecorse Township have for more than three centuries played an important part in the history and development of the Detroit area Located on the Detroit River at an advantageous point, which gave early settlers a clear view of the driver, it was the camping ground of travelers who feared their early archenemy, the Indians.

The same advantages used as a watch guard by the early settlers are now used to advantage by the mammoth industries which have come to the district. Its shipping facilities are ideal, both on water and land with five of the eight railroad serving Detroit having terminals in the village. Its large shoreline has been developed by the Nicholson Terminal and Dock Company, but the Great Lakes Steel Corporation, Fuel Oil Corporation and the Grassell Chemical Company. In addition, the yards of the Great Lakes Engineering Company are at the door of the village.

The village has the largest population of any municipality classed as a village in the United States. Its school system has developed with the advancing trend of the population and the village is adequately equipped, both with public and parochial schools.

Descendants of many of the pioneer families in the Downriver area now reside in the village of Ecorse or in Ecorse Township. The township, incidentally, was one of the first established in Michigan and was also one of the largest.

The LeBlanc family is one of the oldest in the district and traces its ancestry back to Pierre LeBlanc who came to America in 1790 and later settled in Ecorse.

The Labadie family first settled in Ecorse Township in 1764, and Elmer Labadie, a descendant of this family, was the second president of the village which was incorporated in 1902.

Another name prominent in the early history of the village and township is Salliotte. The first member of the family came to the territory in 1669 with Father Pere Marquette.

Two branches of the Wayne County Public Library are located in the village. The public school system is composed of a high school building and four elementary school buildings.

The coming of the steel industry to the village quickly raised it from the small town class to the city division, but it still is operated under a village form of government.

With much room prevalent for expansion, the village will rapidly develop. It is destined, according to the leaders of the village, to again take place in the public eye as it did three centuries ago when it was the desired location of the early French and English settlers.

In January 1933, Ecorse and all of the other Downriver communities were in the depths of the Depression, but things were beginning to look up. Businesses in Ecorse and River Rouge were reporting increases in sales.

The Grosse Isle Transit Company which operated buses through Ecorse and River Rouge enroute to Detroit reported a gain of 10 percent in its business during 1932. The company operated three deluxe buses between Grosse Isle and Detroit.

In January 1933, Armos and Son Grocery Store on West Jefferson at Auburn was selling young chickens for 15 cents, dry salt pork for 6 1/2 cents a pound and rolled rib roast for 15 cents a pound.

Roller skating was popular at the Riverview Roller Skating Rink at White and Monroe, Ecorse.

West Jefferson Avenue was widened in 1937 and Ecorse staged a big celebration. Several Ecorse people were on the board of the Wider West Jefferson Avenue Association which was formed in 1925, including village president Fred C. Bouchard, F.X. Montie, Earl Montie, I.J. Salliotte, Chris A. Raupp and Frank X. Lafferty. When the project was finished the village of Ecorse selected a queen and held a parade. The event was called the greater Ecorse-Wider Jefferson Celebration and featured dancing in the street. Old Glory flew from every light post and Miss Eileen Raupp, 15 year old ninth grade student at Ecorse High School was chosen as queen. Her ladies in waiting were Helen Pudvan, Irene Cochrane, Betty Navarre and Margaret Spaight. Miss Raupp cut the official ribbon opening the road at the corner of Cherry Grove and West Jefferson.

The Great Lakes Baptist Church dedicated its new tabernacle at High and Charlotte in 1938.

In 1909, a group of 16 Ecorse bachelors organized the Western Yacht Club and in time it  was housed in a building opposite LeBlanc Street in Ecorse. Fred Gies, a carpenter, Captain C.J. Brinkman and Roy Buster O'Brien were the leading spirits in the club, aided by Billy Bass and Ed Horn. In 1939, the founders of the Western Yacht Club held a reunion and only six were still bachelors.

Tommy Drouillard, a member of the Ecorse Police Department and his wife, served about 90 muskrats to the guests in Tommy's basement recreation room on Monroe Street in 1939.

The Ecorse Board of Education purchased 125,000 bricks from three local dealers for $32.50 per thousand in 1939. They were used to build School Five, which was named the Claude J. Miller School.

Ellis S. "Duke" Underill, described as one of the most popular public officials who ever served Ecorse, announced that he was retiring from politics, after serving as village and township treasurer and clerk in 1939.

Village President W. Newton Hawkins and School Superintendent C.J. Miller were general chairmen of the President's Ball, the annual social affair that reminded the public about the widespread efforts to combat infantile paralysis in 1939.

In 1939, the Ecorse Theater, located at 4050 West Jefferson, was featuring movies with Shirley Temple, Ann Sheridan and a Betty Boop cartoon. James Stewart was appearing in "Shopworn Angel."

Benjamin F. Goodell signed a contract with the Ecorse School System to be principal of the city's newest school, Five, an elementary. He taught at River Rouge High School from February 1930 to June 1939.

A grand opening for a new gasoline service station at Tecumseh and West Jefferson, Ecorse, gave a free pack of cigarettes with the purchase of seven gallons of gas during the four day festivities in 1939.