The Hacketts of Bob-Lo Island 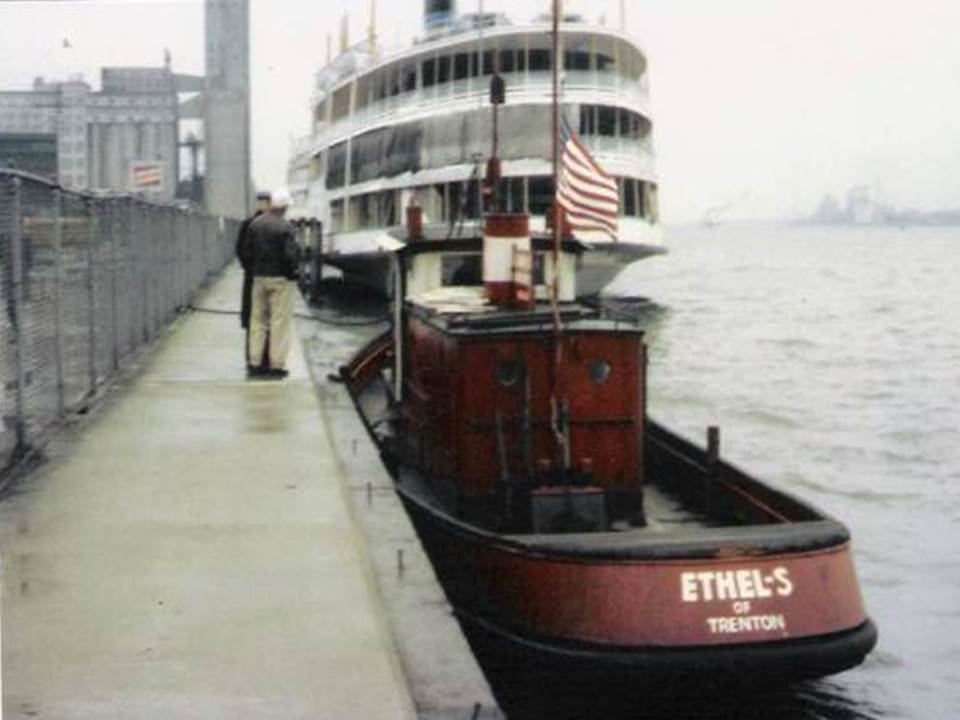 The Bob-Lo boats, Columbia and Ste. Clair were docked in Ecorse after Bob-Lo Island closed. Photograph by John Duguay.
James Hackett and His wife Mary and Ten Children Helped Him Keep the Light Burning

When James Hackett accepted the position of Boblo Island Lightkeeper, he didn’t know that Hacketts would occupy the lighthouse for the next 70 years.

The connection of the Hackett family to the Great Lakes begins in Scotland and travels across the Atlantic Ocean to Lake Erie. Part of the story centers on an island in the Detroit River that the French called Bois Blanc for “White Woods.” They named the island for the white birch and beech trees growing in the region. The English corrupted Bois Blanc to Boblo, because they couldn’t twist their tongues around the French pronunciation.

Boblo Island is located directly west of Amherstburg, Ontario, in the Detroit River on the Canadian side of the border. The island is about 2.5 miles long, 0.5 miles wide and 272 acres in size. The main northbound shipping channel of the Detroit River lies between Bois Blanc Island and the Amherstburg mainland. A stone lighthouse built in 1836 on the southern tip of the island marked the historical beginning of the Detroit River navigation channel for ships traveling upriver from Lake Erie.

In the 1700s the French established a French Catholic mission for Wyandot or Huron Indians on Bois Blanc Island and for years missionaries and fur traders were its only visitors. It became strategically important when the British built Fort Amherstburg, now Fort Malden, to guard the passage along the Detroit River. Guns from the Fort could reach the island across the navigable river waters and secure it.

During the War of 1812, Shawnee Chief Tecumseh used Boblo Island as his headquarters and Canadian rebel sympathizers used it as an invasion point during the Upper Canada Rebellion of 1838. Runaway slaves rested at the lighthouse before they continued their journey to Canada, and twentieth century rum runners found sanctuary from patrol boats in the shadow of the light house.

Boblo Island quickly became the center of lives of James and Mary Hackett from the time they arrived on the Detroit River. James was born in 1787 in Aberdeenshire, Scotland and was a sailor on the Atlantic Ocean for many years where he had countless adventures and narrowly missed several watery deaths.

James Hackett Begins His Career on the Great Lakes

Before he left Scotland for Canada, James Hackett married Mary Riley who was born in Ireland, and eventually they had a family of ten children. He came to the Great Lakes in 1816, and began his sailing career on the lakes in the full rigged brig Wellington. The Wellington was built and launched in October 1816, a short distance from Windsor, then called Moy.

In 1817, Captain Hackett and the Wellington towed the schooner Axmouth, also built at Moy, to Sault Ste. Marie. The Axmouth had been built for the Northwest Fur Company and its owners chose Captain Hackett to deliver her. When she arrived at Sault Ste. Marie, theAxmouth was hauled over the Portage on the Canadian side and relaunched into Lake Superior, which made her the first vessel ever taken over the Sault Ste. Marie portage.

In 1836, Lieutenant Governor of Upper Canada General Francis Bondhead, appointed Captain Hackett light keeper on Boblo Island. Family tradition says that Mary Hackett was responsible for her husband’s appointment as Boblo Island light keeper. With babes in arms, Mrs. Hackett visited the Governor General and petitioned so effectively for her husband that Governor General Bondhead immediately gave him the position and it stayed in the family for seventy years.

Another version of the story has it that Governor General Bondhead passed Mrs. Hackett and the family dog “Sailor” one day. He admired the dog and asked if he could buy it. Mrs. Hackett said said that he couldn’t buy Sailor, but he could have the dog in exchange for the lighthouse keeping job for her husband. Whatever version of the story is true, James Hackett became lightkeeper of Boblo Island. As a token of appreciation, James and Mary named a son born on April 10, 1842, at the lighthouse, Francis B. Hackett in the Governor General’s honor.

The Hackett’s quiet life on Boblo Island turned chaotic on January 8, 1838, when a group of 60 Canadian “Patriots” and their American sympathizers on board the Schooner Annelanded on the island.

The “Patriots” were a group of Irish Canadians and United States citizens who had moved to Canada who rebelled against the British Colonial government.They planned to capture the peninsula lying between the Michigan frontier and the Niagara frontier from Canada and attach it to the United States. Until the British government quelled the “Patriot Rebellion”, the Patriots won a few minor victories. They forced the government to evacuate the small military guard and the Hacketts from the island. The next day the Anneran aground near Amherstburg and the rebels were all captured.

Flags Fly at Half Mast for Captain Hackett

Captain Hackett and his family returned to Boblo Island and lived peaceably at the lighthouse for nearly four decades. The Detroit Free Press noted the death of Captain James Hackett which took place on September 24, 1872. According to the Free Press,Captain Hackett was the oldest of the Great Lakes navigators and a man of strong memory who easily recited many interesting incidents from his life on the sea and on the lakes. The flags of the ships that steamed past in the shipping lanes flew at half mast to honor Captain Hackett. Mary, his wife, and several of his children survived him.

James Hackett became lighthouse keeper of Boblo Island lighthouse in 1836, and served until his death in 1872. Several of his ten children carried on his maritime legacy.

Captain James Hackett loved the sights and sounds of the Great Lakes and passed that love to his ten children. Several of his children kept the Boblo Island light and became ship masters and owners.

Robert Hackett enjoyed the honor of having a tug named for him. The tug Bob Hackettwas a wooden propeller driven steam tug built in 1869 by J.P. Jones of Amherstburg, Ontario and later owned by Odette & Wherry of Windsor, Ontario. On September 8, 1885, the Bob Hackett collided with the Western Line propeller St. Magnus, bound from Kingston to Port Arthur, near the head of Bois Blanc Island in the Detroit River.

Piloted by Captain George Odette, the Hackett was cut to the keel and took about three minutes to sink in sixteen feet of water. Luckily, the St. Magnus picked up the Hackett’screw, but the Hackett sank so quickly that clothing containing money belonging to several of her crew went to the bottom of the River with her.

Henry and Alexander Hackett were twins. Henry was born in 1832 at the lighthouse on Bois Blanc Island. The Canadian Census of 1881 lists him as age 49, a mariner; his wife Ida, 36, Franky, 15, and Grant age 17. The Detroit Post and Tribune of May 14, 1880 reported that Captain Henry Hackett of Amherstburg had gone to Winnipeg to superintend the construction of a government lightship to be used on Lake Winnipeg.

Thomas Hackett was born on Bois Blanc Island on January 6, 1840. He was a sailor from age 14, his early experience being on sailing vessels. Captain Hackett superintended the building of the tug Torrent of Alger, Smith & Company and did his work so well that he was taken into the company’s service as master of the tug. Later he commanded the tugVulcan and steamers Manistique, Schoolcraft and Volunteer, the Volunteer being the largest raft towing steamer in the world.

In 1880, while he commanded the Vulcan, Captain Hackett sighted the Detroit passenger steamer Marine City on fire off Alcona. He at once let go his raft, steamed to the scene where he and his crew saved the lives of some 70 or 80 people. A few panic stricken people had jumped overboard before the tug arrived and were drowned. A majority of the people would have drowned if the Vulcan had not arrived because no other boats were around.

On December 18, 1860, Captain Hackett married Miss Christiana Honner, a sister of Captain T. Honner of Milwaukee and E.W. Honner of Malden. The Hacketts lived on the river front below Amherstburg on the farm until they later moved to Detroit.

According to his obituary in the Amherstburg Echo, Captain Thomas Hackett was one of the best known and most skillful masters on the Great Lakes. He died of heart disease on September 27, 1894, aboard his steamer, the Volunteer, lying at the foot of Orleans Street in Detroit.

Captain Francis B. Hackett was born April 10, 1842, at the Bois Blanc lighthouse, and his early lullaby was the music of the waves. He attended school in Amherstburg, and the age of seventeen was ready to try his fortune on the lakes. He began in 1859, as a boy on the schooner William G. Grant, plying between Chicago and Montreal, in the grain business.

During the following two years he sailed The City of Dresden, and then took charge of theErie Belle. After three years he bought the tidy little tug Home Rule, which he operated as a wrecking tug. His long experience on the lakes has made him familiar with all their moods, and few mariners have a better record as safe and reliable sailors.

On February 6, 1866, Captain Hackett married Jean Gordon, who was born in Scotland, daughter of John Gordon. Captain and Mrs. Hackett had a pleasant home situated on the river front at Amherstburg, in plain view of all the boats as they passed during the navigation season.