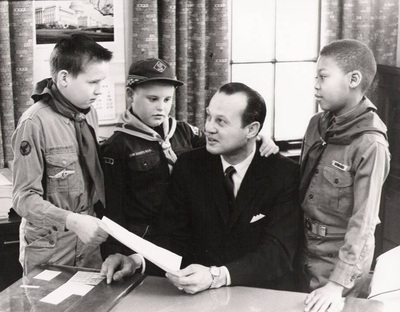 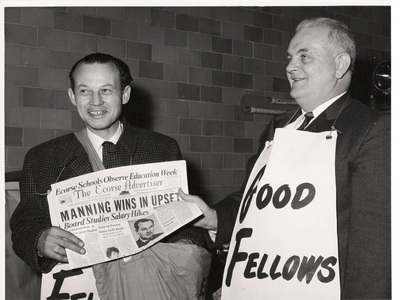 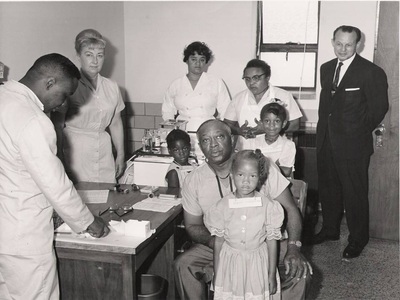 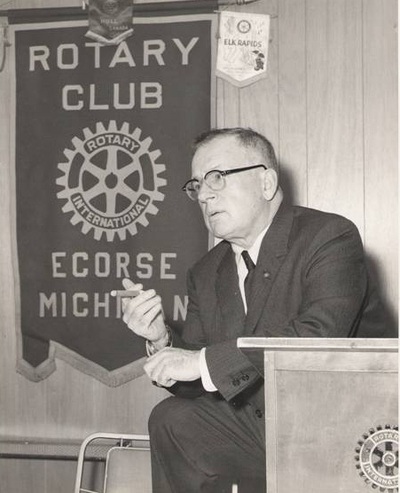 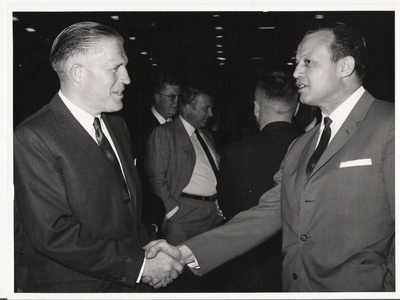 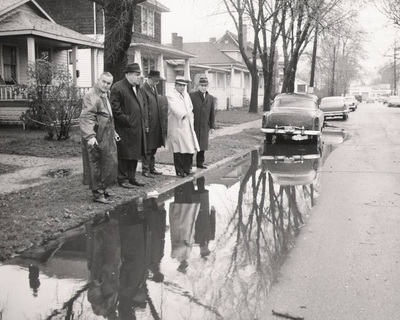 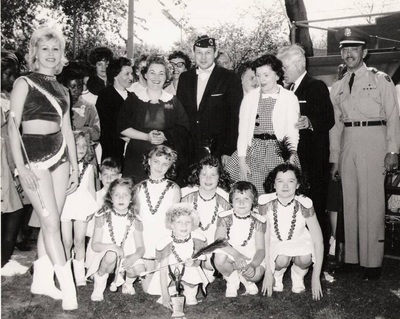 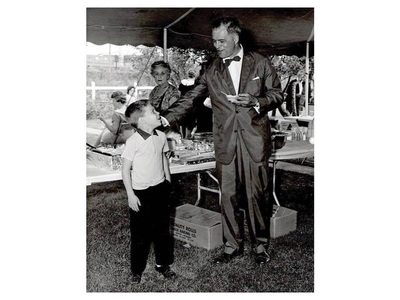 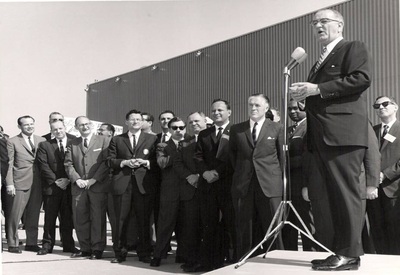 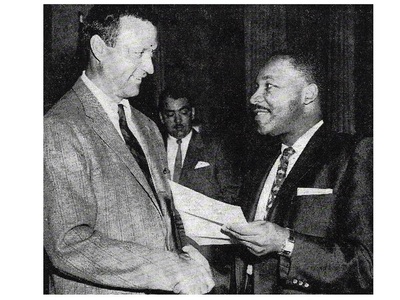 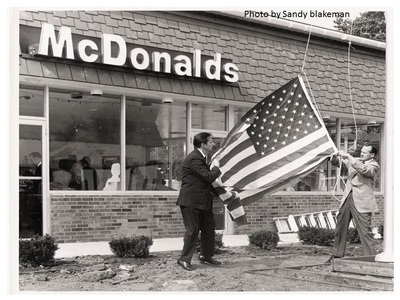 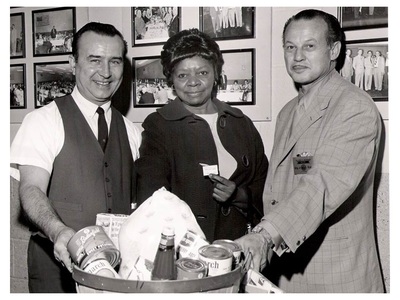 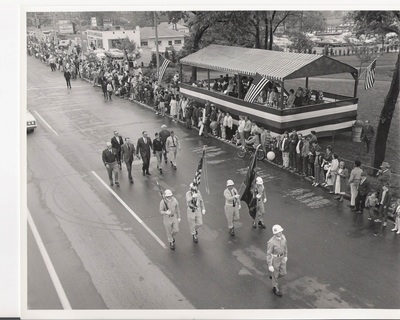 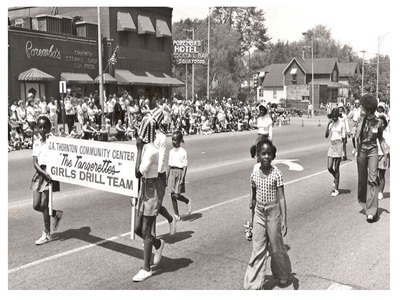 The Kiwanians were holding their installation of new officers, but they had another item on the meeting agenda. They had secretly arranged for another photographer to attend the meeting that evening and photograph an important event involving Sandy. The Kiwanis Club members were honoring Sandy Blakeman by naming him outstanding citizen in the year in Ecorse.

Although he was surprised and happy, Sandy stressed his membership in the Rotary Club. He was also an original member of the Ecorse Jaycees.

The Kiwanis Club honored Sandy for his community-wide work in Ecorse. He served as public relations director for the City of Ecorse and headed the Ecorse Senior Citizen program.  He had been public relations director and senior citizens coordinator for Ecorse since 1962. He was also a commercial photographer who took photographs of many people and organizations in the Downriver area. He worked in the real estate business with Underill and Associates.

Sandy came to Ecorse in 1940. He was drafted into the Army in October 1941, and was transferred into the U.S. Army Air Corps in 1942. For a time he served in Texas and England. In June 1944, Sandy found himself in Normandy and served there and near Paris until 1945. He was stationed in Florida and New Jersey from 1945 until 1946, when he received his honorable discharge. While Sandy served in Europe, he took many photographs illustrating the experiences of American soldiers.

When he came home from the Army Air Corps, Sandy and his wife Mary settled in Ecorse and Sandy worked for a time in the photo department at Loveland’s Drugstore and set up his own photography business. He took many photos of Ecorse that make an important contribution to Ecorse history. He and Mary and eventually his three daughters, Janice, Leta, and Susan lived on Goodell Street in Ecorse.

In 1946, he organized the Ecorse Camera Club and served as its president for five years. In 1952, he helped reorganize the camera club and it became the Michigan Pictorial Society. He helped organize the Greater Detroit Camera Club that had 3,000 members in 1969.

According to Sandy, he turned his full attention to community projects in 1962 when he was appointed public relations director for Ecorse. Organizing Ecorse Senior Citizens was one of his first accomplishments and the Ecorse Senior Citizens group has 975 active members. He has worked with many clubs and organizations to improve Ecorse.

Sandy also did some writing for the Ecorse Advertiser and his twelve part series about Ecorse businesses was reprinted in the Mellus Newspapers. He interviewed Ecorse business owners and profiled their businesses, including Slavin’s Dress Shoppe and Don Dodge, Ecorse businessman.

One of the most pleasant business personalities in Ecorse is Mrs. Sarah Slavin, owner of Slavin’s Shoppe located at 4062 West Jefferson.

Mrs. Slavin has been in the women’s apparel business since the age of 15. Her background includes nine and one half years as a buyer at Russels, five years with Himelhoch’s and 16 years at her present location.

Always community minded, Mrs. Slavin advocates better shopping facilities in Ecorse. She contributes by keeping up to date on the latest creations during her New York visits, and institutes a “feel at home” policy for her patrons.

(This was the twelfth in a series of interviews conducted by M. Sandy Blakeman and printed in the Mellus Newspapers in the 1950s).

After 30 years of selling and appraising real estate in the Downriver area, Don Dodge looks to the future development of the district with the same optimism that influenced his decision to become associated with the Underill Agency in the early twenties.

Dodge came to Detroit in 1916 from Bluffton, Ohio, to work as a machinist and toolmaker in Detroit’s auto industries. He began his real estate career in Detroit and became affiliated with Ellis (Duke) Underill in 1925. Dodge is a member of the Downriver Chamber of Commerce and also serves as a member of the board for the Guarantee Savings & Loan Company.

There is still no limit to the future possibilities of Downriver real estate from the standpoint of investment and development, Dodge believes.

“It was no accident that the pioneer Frenchmen selected Ecorse as a site for settlement some 200 years ago,” Dodge mused. “Geography favored Ecorse. The Detroit River offered the only means of transportation for these early settlers and they were the first to see in the waterway the potential that has since made the Downriver area one of the greatest industrial centers in the world.”

The same potential still exists, Dodge adds, “and the future is even brighter than at any time in the history of the area. Now that the St. Lawrence Seaway is no longer a dream but has been approved by the governments of both the United States and Canada with construction to start within the year, who can predict the tremendous effect this project will have on industrial expansion and increased real estate values?”

When asked to comment on the effect the St. Lawrence Seaway will have on the home owners, Dodge remarked, “In addition to natural advantages of industry the area also provides sound real estate investment opportunities and home ownership advantages unsurpassed in any other industrial area.”

Sandy collected his GI photographs into a book that his family was gracious enough to share.  The other photos in the Blakeman photo gallery are from Joie Manning, daughter of former Ecorse Mayor Richard Manning who was also gracious enough to share them. Sandy took them while her father served as mayor of Ecorse. They are invaluable historical records of a bygone era in Ecorse history.