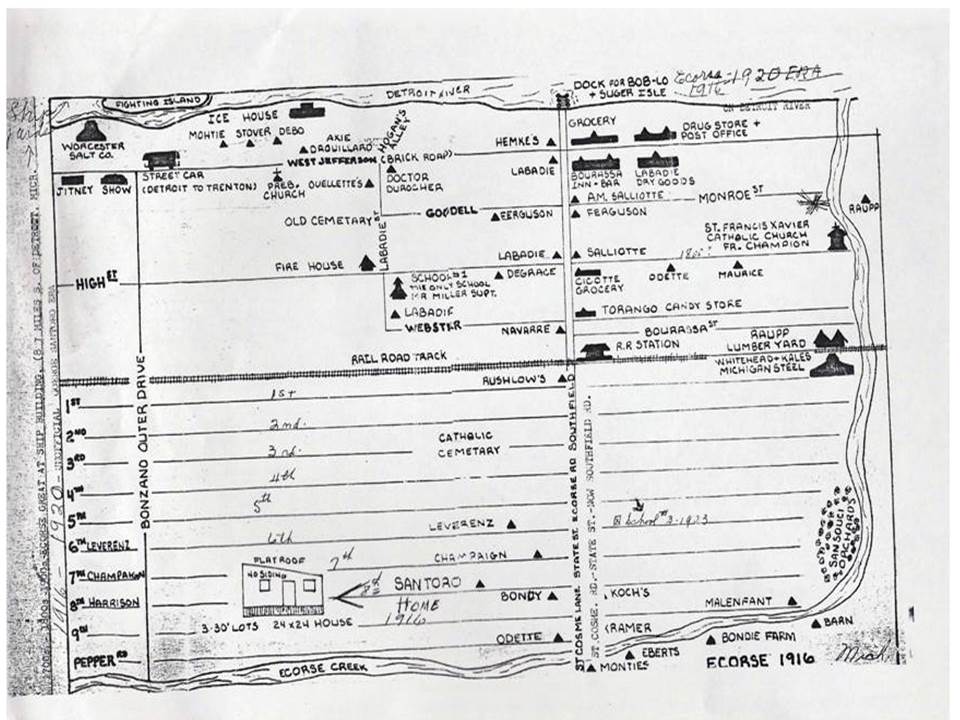 I Remember Ecorse When...

In September 1971, Mrs. Evelyn J. Jones of West Wesfield in Ecorse, recalled these Ecorse days when:

Mrs. Nagy of Second Street who lived in Ecorse for 54 years remembered this Ecorse:

In October 1971, Mrs. Florine Mitchell submitted these memories of Ecorse days when:

John Frankhouse grew up in Ecorse from 1920-1941, and remembers going to School Two on Josephine Street. He said that there were three other schools at the time-School One and School Three and the High School. Before the high school on Seventh Street and Outer Drive was built, School One on High Street was the high school which only went to the tenth grade.

The big day in Ecorse was Ecorse Day, a boat ride from Southfield Dock to Bob-Lo Island. Seems like it was a day of rides, games and races. They city used to freeze the field across from the municipal building. That was a rink for ice skating.

The main shopping area was from West Alexis to Josephine. Kroger, C.F. Smith, Loveland Drugs, a small movie house, etc., were there. When I was very young, they only had silent movies there, but they only charged six cents for a double feature. Later on they built the Harbor Theater near Westfield. The streetcars were running then and for five cents and a penny transfer you could ride to Belle Isle for a picnic and to visit the children's zoo.

The "Little French Fishing Village" on the Detroit River was long the place to eat a muskrat meal. The muskrat or "marsh rabbit" was easy to trap as they made holes in the ice where traps could be set. My grandfather trapped and ate them. They were skinned and then soaked in vinegar and salt water for 24 hours, and then baked or boiled with onions. The meat was dark, and I think a taste for them had to be acquired. Restaurants Downriver served them as late as the 1960s that I know of and may be serving them today. Marsh rabbits were plentiful in the fresh water swamps that covered the Downriver area at the time.

As for the early years that I remember, what is now Quality drive coming off Jefferson Avenue had a swamp on both sides. Jefferson Avenue was "high ground." One of my early Ecorse boyhood memories was of making a raft and exploring the swamp.

If you have any Ecorse memories, please email them to me and I will be glad to publish them.