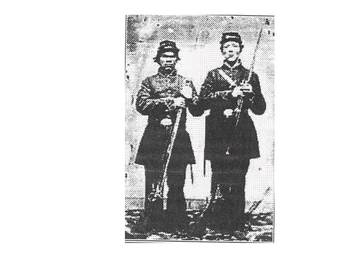 
Pascal Odette( the soldier enlisted in Company H, 14th Michigan Infantry on December 30, 1861, at age 18. He re-enlisted as a Veteran Volunteer on January 4, 1864 at Columbia, South Carolina. On August 7, 186, he was killed on the outskirts of Atlanta, Georgia.

The 24th Michigan Volunteer Infantry was known as the Iron Brigade and it included many volunteers from Wayne County. At least 11 of the company were Ecorse (Township) men whose names and descendents are still well known in the area. In May 1951, theEcorse Advertiser reported that State Representative Earl Hebert had searched the records in Lansing and found a complete history of both Company F and the 24th Michigan Infantry. Frank X. LeBlanc, a member of one of Ecorse’s oldest families requested the information because his father Antoine LeBlanc had volunteered and served with the Iron Brigade.

Antoine Leblanc and the rest of the Iron Brigade recruits left Detroit a week after being mustered into the service. The men made many long marches and on December 12, 1862, crossed the Rappahannock at Fredericksburg and during the next three days saw its first action. For three days, Confederate troops constantly fired on the Iron Brigade and suffered heavy casualties.

Its next important engagement was at Port Royal on April 23, 1863, when the regiment made a brilliant attack, capturing a number of prisoners and driving the enemy from their positions.

Shortly after Port Royal, the 24th Infantry entered the Pennsylvania campaign and on July 1, 1863, arrived at Gettysburg, Pa. The regiment immediately went into battle and it was one of the first infantry commands to enter the action in the three day battle. The first order was to charge and the 24th Infantry with the rest of the brigade dashed forward and captured parts of Confederate General Archer’s army.

Following this success, the 24th Infantry changed front and formed a line of battle in McPherson’s Woods. The Confederates advanced in double lines, their numbers being large enough to overlap and flank the Union forces. They poured a murderous fire into the line of Yankees and forced a retreat to new positions. The ground was covered with dead and wounded. Four color bearers were killed and three wounded in holding the flag aloft.

The 24th Infantry went into this action with 28 officers and 468 men. During the first day of the battle, 22 officers were killed or wounded, 71 enlisted men were killed, and 223 wounded for a total loss of 316.

In all, the 24th Infantry took part in 21 major engagements, finally returning to Springfield, Illinois. While the 24th was in Springfield, it escorted at the funeral of President Abraham Lincoln. It was mustered out of service in Detroit on June 30, 1865, after nearly three years of brilliant service.

Elijah Goodell is buried in St. Francis Xavier Cemetery and according to his tombstone, he was born in 1832 and died in 1909. The rest of his stone is buried in the ground, but the word “sergeant” is still legible.

Elijah enlisted in Company C of the 5th Michigan Cavalry and enlistment records note that he was 27 years old.

Samuel J. Lawrence was born on the Island of Guernsey, English Channel, on August 15, 1848. In 1852, he came to America with his parents who settled in Wayne County, Michigan. Samuel acquired a common school education and at the age of 16, enlisted in Company D of the 14th Michigan Volunteer Infantry. Samuel spent six of his 22 months of service as a mounted orderly on General Stanley’s staff.

When the war ended, Samuel went West, spending time in nearly every western state and territory. In 1872, he returned to Michigan, settling in the City of Wyandotte and was appointed lighthouse keeper by the Honorable Zachariah Chandler, a position that he held for five years.

From 1897-1898, Samuel was Senator from the Fourth District, that comprised the 12th, 14th, and 16th wards of the city of Detroit, the city of Wyandotte, and Ecorse Township. He also served two terms as a Wyandotte Alderman.

He forged an early business career as a contractor in canal and bridge work. When he settled on Grosse Isle in 1848, he went into the lumbering business. He was the Representative from Wayne County in 1859-1860.

In 1861, James enlisted in Broadhead’s  Cavalry, designating his hometown as Trenton. By 1862, he had been promoted to Colonel of the 9th Michigan Cavalry and in 1863, he commanded a division of Burnside’s Corps, Shackleford’s Division. He was mustered out in 1864, after resigning because of disability.

Continuing to be active in politics after the Civil War, James served as Senator for the Third District in 1875 and 1876. In 1886, President Grover Cleveland appointed James Indian Agent for the Osage Agency.

Silas Fenton enlisted in Company E of the Seventh Michigan Infantry in May 1864 at Ecorse. Silas enlisted for a period of three years. He was wounded in action at the Battle of Spottsylvania Courthouse on May 12, 1864, and discharged for disability at Washington D.C., on February 25, 1865.

Moses Salliotte was born in Ecorse in 1807 and according to the data on his tombstone in St. Francis Cemetery, married Charlotte Cook, born in Yorkshire, England in 1815. Moses and Charlotte had five children, including Gilbert, the third son. Gilbert never married. He enlisted in the Army during the Civil War and was shot through the cheek and mouth.

Hyacinth Salliotte, brother of Moses, married Adelaide Labadie. Their son, Samuel, was a Civil War veteran and their son Antoine, born in 1841, was also a Civil War veteran. He served with General Sherman in his famous march through Georgia and was twice wounded in action.

From about 1879 until 1948, Northern veterans of the Civil War who had returned home and rebuilt their lives organized and joined Grand Army of the Republic Posts. Ecorse veterans formed F. Buhl Post, possible named for Frederick Augustus Buhl, the oldest son of Frederick Buhl, a prominent Detroit businessman. For a time, Captain Buhl served on the staff of George Armstrong Custer and he was badly wounded in a fight near Sharpsburg, Maryland. He died of his wounds on September 15, 1864. 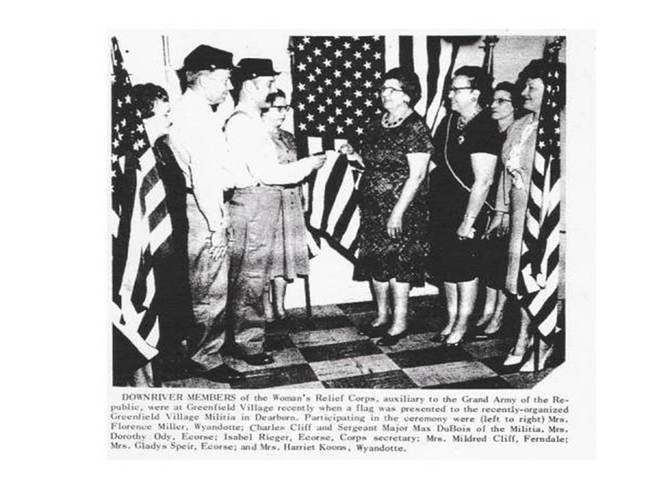