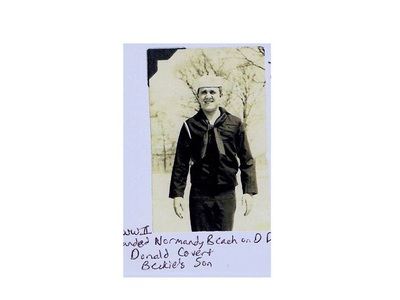 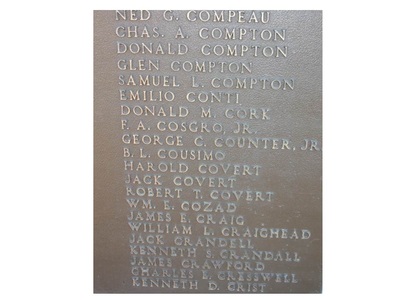 A snapshot of the small city of Ecorse in the early 1940s included the shores and beaches of the Detroit River where people sat relaxing on park benches, fishermen fished from the shore, and Ecorse Rowing Club rowers practiced their craft for everyone to enjoy. By the 1950s, a memorial dedicated to World War II veterans gleamed beside the Detroit River, a new generation relaxed on the park benches, and the war had thinned the ranks of the fisherman and the Ecorse Rowing Club rowers.

Hometown Ecorse in the 1940s featured pictures that combined to make a unique atmosphere that made Ecorse home. Jefferson Avenue, newly widened included the renovated Ecorse Presbyterian Church, Loveland’s Drug Store, Liggett’s Drug Store later to be Seavittes Drug Store and the A&P grocery store. Streets named for such founding pioneers as Alexis, Salliotte, Labadie, Charlotte and Goodell sheltered small wooden houses with front porches and back yards with gardens.  The smell of burning leaves in fall, blooming lilacs in spring, frying bacon through summer’s open windows, and coal fires in overworked winter furnaces made up the atmosphere of Ecorse. Great Lakes Steel smells overpowering all others completed the atmosphere of 1940s and 1950s Ecorse.

People like Mayor William Voisine who half of the townspeople considered a crook and the other half a benefactor made Ecorse home. Business people like Bert and Loretta Loveland and the Seavittes, doctors like Dr. Hileman, Dr. Durocher, Dr. Payette, teachers like the young Miss Blanche Elliott, Miss Margaret Milner made Ecorse home. Ecorse rowers like Coach Jim Rice, the Tanks, the Monties, the LeBlancs, made Ecorse home. Ordinary citizens whose names were not famous but who worked every day at Great Lakes Steel and Ford and raised their families and went to school and church made Ecorse home.

Ecorse sent hometown soldiers to D Day and other World War II theaters to fight for their hometown and their country.

D Day and the Bigger Picture

D Day like war, is made up of the big picture- the theater of war - , individual stories – soldiers, civilians and their lives and home towns, and the aftermath- survivors and their reimagined lives. Along with countless other American soldiers, my Uncle Jack Donald Covert from Ecorse contributed part of his life to the big D Day picture.

In 1943, the Allied nations fighting World War II, including the United States, Great Britain, Canada, Norway and Free France began planning Operation Overlord with the goal of restoring the French Republic and beginning the process of reclaiming Western Europe from the Germans. The commanders of the operation were Generals Dwight D. Eisenhower and Omar Bradley from the United States and Generals Bernard Law Montgomery, Trafford Leigh-Mallory, Arthur Tedder, Miles Dempsey, and Bertram Ramsay from Great Britain. The German generals were Erwin Rommel, Gerd von Rundstedt, and Friedrich Dollmann.

Planners had to consider the strength of the enemy. Hitler placed German Field Marshal Erwin Rommel at the head of German forces and charged him with strengthening the fortifications along the Atlantic wall to meet the Allied invasion. The planning also involved scrutinizing and evaluating weather conditions, including the phase of the moon, the tides, and the time of day. The planners concluded that only a few days in each month were optimal for amphibious landings and they couldn’t pinpoint a weather perfect day. In fact, the D in D-Day stands for “day” because the final date of the invasion was so difficult to pinpoint and so dependent on the weather.

Finally the Allied planners scheduled the Normandy Landings for June 6, 1944. The code names that the Allied forces used for the beaches stretching along the 50 miles of Normandy coast where the 156,000 troops were scheduled to land were Utah, Omaha, Gold, Juno, and Sword. An armada of 5,000 ships and landing craft, 50,000 vehicles and 11,000 planes landed on the five designated beaches, and by June 11, 1944, Allied troops had firmly secure the beachheads.

The Allied foothold in occupied Europe came with a high price tag. There were 1,000 casualties each on the British Gold and Sword beaches and 600 airborne troops were killed or wounded and 600 more missing with 100 glider pilots also wounded or killed. The 3rd Canadian Division at Juno Beach recorded 340 men killed, 574 wounded and 47 captured. The casualty figures for the American Utah and Omaha Beaches were broken down as 1,465 dead; 3,184 wounded; 1,928 missing and 26 captured. Omaha Beach proved to be the costliest of them all, with the US 1st and 29th Divisions suffering around 2,000 casualties. The number of German casualties is estimated to be between 4,000-9,000 men.

The Allied landings in Normandy made it possible for the Allied forces to reclaim Europe from the Nazis and many military historians consider it the turning point in World War II and a vital contributing factor in the surrender of Germany in May 1945.

Ecorse and the Bigger Picture

Hometown Ecorse soldiers contributed to D Day, the Allied victories in Europe, the Mediterranean, and the Pacific and the winning of World War II. Although Ecorse was small, their sacrifices were large and must not be overshadowed in the larger D Day and World War II picture. Some of the home town Ecorse boys returned, but some did not. They all must not be forgotten. My Uncle Jack Donald Covert was fortunate enough to come home to Ecorse from Normandy and enjoy the rest of his life until he passed away on July 28, 1995.

Here is a partial list of Ecorse soldiers as listed in Michigan Casualties in World War II, December 7, 1943-December 6, 1944. Frances Loomis of the Detroit Public Library Reference Department compiled it from stories in the Detroit Free Press and the Detroit News. Not all of the veterans on the list fought on Normandy Beaches, but like the waves that still crash on Normandy’s sandy beaches, their individual sacrifices and service created the huge waves that gradually formed the Allied hurricane force that won the War.   This just a small splash in beginning to tell the stories of Ecorse veterans.

Ecorse Soldiers as listed in Michigan Casualties in World War II.  December 7, 1943-December 6, 1944. Compiled by Frances Loomis, Detroit Public library Reference Department. The list is comprised of over 2,000 names of soldiers from the entire state of Michigan.  I picked out the Ecorse soldiers. If you know anything about these soldiers or any other Ecorse soldiers, please share your information.

Sgt. Edwin A. Montry Missing 9-17-44 in the Mediterranean

Private George A. Quiel Killed 7-18-44 in the Mediterranean