A Pitt Street in Ecorse Christmas 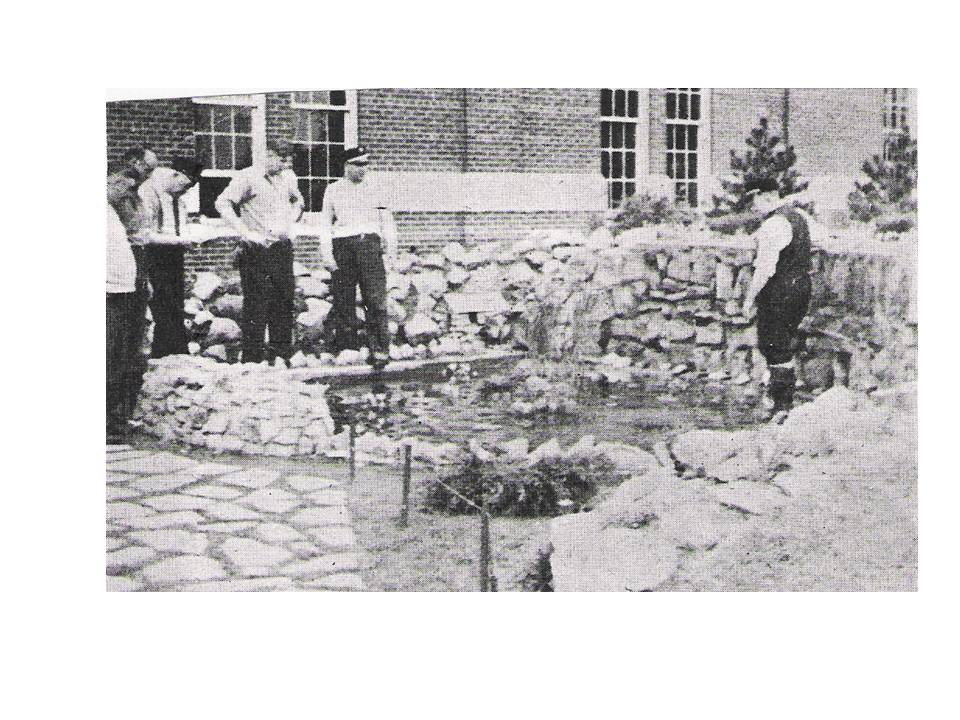 The fishpond in beside the Fire Department which was located in the old Ecorse City Hall.

Of the Covert tribe of eleven kids, nine of us  were born in Michigan, lived on Pitt Street in Ecorse and like our mother before us, we went to School One. I’m sure I’m not the only former pupil who remembers the School One teachers. Mrs. Pudvan  was my first grade at School One. Mrs. Trickey was my second grade teacher at School One, Miss Ouelette my third grade teacher, Miss Heater my fourth, Miss Christine McKenzie my fifth and Mr. Magnus Meier my sixth grade teacher.

I remember walking to School One every day from the house at 4276 Pitt Street, down High Street across from the Trunk Factory, and across Cicotte Street. Then there were a long two blocks to cover past the old brick Ecorse City Hall and a stop at the fishpond by the fire station. Whenever I had a penny to spare, I threw it in to join the other pennies sparkling on the bottom of the pond and made a wish. After the fish pond, a quick dash across the single railroad track ( it’s still there) and a complete stop at the corner of Labadie and High where the Sixth grade safety patrol boys helped us get across High Street safely and into the school yard.

My brother Joe is the center of one School One memory that we still laugh about. The day that Joe started kindergarten at School One, I was safely upstairs in Sixth grade. It wasn’t difficult to ignore the fact that yet another Covert brother was invading my school space until Joe decided to break my anonymity. He was a Mama’s boy and he definitely didn’t want to be separated from her during the day. He was crying when he arrived and he didn’t stop crying after our mother left.  Up in the sixth grade room, we could hear him crying all of the way from the downstairs kindergarten room.  “I want my Mommy,” he bellowed. “Mommy! Mommy!”

I managed to concentrate on my history book – Mr. Meier taught us ancient history in the sixth grade, which was a blessing to me although a curse to many of my classmates. The volume of Joe’s crying continued to rise until the entire school could no longer ignore him. A frazzled teacher came up and knocked on the door of the sixth grade room. To my great embarrassment, Mr. Meier summoned me up to his desk and asked me to go downstairs and see if I could calm Joe down. Reluctantly, I went.  Instead of  a kind, soothing message, I told Joe that he was embarrassing me to death and he’d better shut up.

He didn’t.  Finally, the kindergarten teacher gave up and called my mom.  I knew it wasn’t a convincing position, but for weeks afterward I pretended not to know him.

Another good School One memory is the class Christmas parties.  Mom baked Christmas cookies for us to take to school and helped me and my brothers pick out 25 cent gifts at Ben Franklin for our class gift exchange. But the most exciting event except for Christmas Eve was the Christmas party at the city garage. Our house onPitt Streetwas just across Benson from the city garage. I didn’t pay too much attention to it the rest of the year, but at Christmas it turned magic. You see, Santa Claus made an early stop at the garage on a Saturday early in December with a bag of gifts for the neighborhood kids. The day of his scheduled stop, I scouted out the place early. I was determined not to miss Santa and I was just as determined to ask him for a baseball. I knew that if I had a new baseball I could get my fellow six grader Bill to notice me during our baseball games in the vacant lot by his house. Maybe he would even walk me home from School One.

This Saturday before Christmas, I did get to the garage early. In fact, one of the men running back and forth unloading a truck load of boxes asked me what I was doing there so early. “I need to talk to Santa,” I told him.

I went home and hung around the kitchen with Ma for an hour or so. Then I went back. “Is Santa here yet?” I asked one of the men who was still unloading boxes.

The man pointed to a door in the back of the building. “He’s combing his beard,” the man said. “Just get in line and you’ll be able to talk to him.”

I didn’t get in line. Instead I ran to the door that the man had pointed out and threw it open. Santa Claus stood in front of the mirror combing his white beard. “I need a brand new baseball,” I said.

“Ho ho ho, Merry Christmas,” he said, reaching inside of his bag. He not only gave me a baseball, he gave me a bat to go with it.  “Wait a minute, don’t you want me to wrap them up?” he asked.

“I want them just like this,” I called over my shoulder as I hightailed it out of the garage. “Thank you for the best Christmas ever, Santa.”

It was a good Christmas. We had pancakes for supper that Christmas Eve, because Mom said that she and Dad gave a lot of their money to Santa Claus for Christmas presents.  I ate my pancakes without a blink. I liked pancakes and I was so happy with my baseball and bat I would have eaten pancakes the rest of the year without complaining.

That spring Bill and me and the rest of the neighborhood kids played baseball into the warm twilight evenings and he even told me that I was a good player. We went steady for a while that next fall and I was certain that the baseball and bat from the Ecorse municipal garage Santa helped our romance.

Alas, by the next Christmas, we had broken up.  Our romance proved to be as short lived as the gaily wrapped packages that Santa gave away at those Ecorse municipal garage parties. But the memories will last as long as  Christmas.