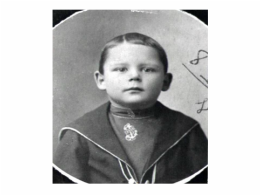 Leo Navarre, a member of an Ecorse pioneer family.
Ecorse Is The Largest Village In The United States

The village of Ecorse and Ecorse Township have for more than three centuries played an important part in the history and development of the Detroit area. Located on the Detroit River at an advantageous point which gave early settlers a clear view of the river, it was the camping ground of travelers who feared their early archenemy, the Indians.

The same advantages used as a watch guard by the early settlers are now used to advantage by the mammoth industries which have come to the district. its shipping facilities are ideal, both on the water and land, with five of the eight railroad serving Detroit having terminals in the village. Its large shoreline has been developed by the Nicholson Terminal and Dock Company, by the Great Lakes Steel Corporation, Fuel Oil Corporation, and the Grassell Chemical Company. In addition the yards of the Great Lakes Engineering Company are at the door of the village.

The village has the largest population of any municipality classed as a village in the United States. Its school system has developed with the advancing trend of the population and the vilage is adequately equipped, both with public and parochial schools.

Descendants of many of the pioneer families in the Downriver area now reside in the village of Ecorse or in Ecorse Township. The township, incidentally, was one of the first established in Michigan and was also one of the largest.

The LeBlanc family is one of the oldest in the district and traces its ancestry back to Pierre LeBlanc, who came to America in 1790 and later settled in Ecorse.

The Labadie family first settled in Ecorse Township in 1764 and Elmer Labadie, a descendant of this family, was the second president of the village, which was incorporated in 1902.

Another name prominent in the early history of the village and township is Saliotte. The first member of the family came to the territory in 1669 with Father Pere Marquette.

Two breaches of the Wayne County Public Library are located in the village. The public school system is composed of a high school building and four elementary school buildings.

The coming of the steel industry to the village quickly raised it from the small town class to the city division, but it still is operated under a village form of government.

With much room prevalent for expansion, the village will rapidly develop. It is destined, according to the leaders of the village, to again take place in the public eye as it did three centuries ago when it was the desired location of the early French and English settlers.