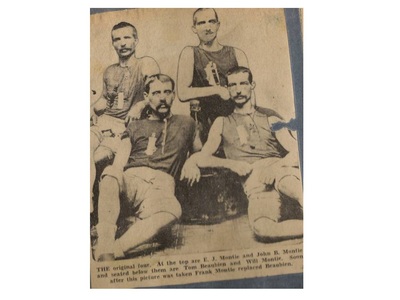 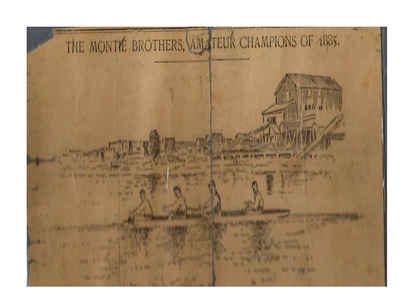 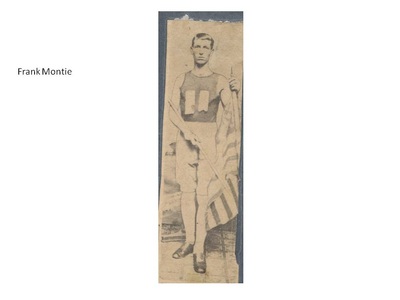 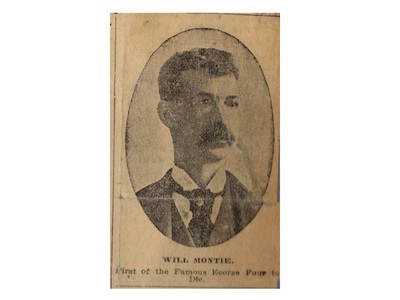 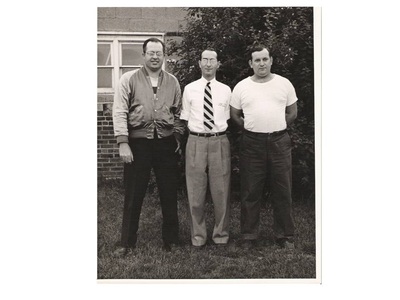 William Henry Montie, aged 45 years and proprietor of the Ecorse Hotel, died in Ecorse
of cancer. His wife and four children survived him. His funeral was held at St. Francis Xavier Church and he was buried at the Ecorse Cemetery. He was born in
Ecorse in 1857.

He was one of the four famous Montie brothers, William, Elijah, John, and Frank, who were the champion oarsmen of their time and who won the championship in 1885 from the Hillsdale Club at Belle Isle.

As far back as 1875, the Montie boys began rowing on the Detroit River in a ten oar barge. Winning from all other teams in the neighboring country villages the four brothers rowing in a shell, began to look around for larger game. They raced the Northwestern and National teams at St. Clair in August 1888, and made a mile and a half straight away in 6:32. The Montie team won the Russel House Cup in 1881. They traveled to New York City in 1893, but the Argonaut club there defeated them because a foot brace broke just after the start of the race.

The Hillsdale Club having won all the championships of the East had come to London and cities of the old world where they took first prize in all races. When they returned to the United States they were challenged by the Montie Four. The race was pulled off at Belle Isle in 1885. The Montie boys won the race and were given the world’s championship. They traveled all over the United States and out of 33 races, lost only twice.

A few years ago the boys divided up the trophies. In the house o each is a wealth of blue ribbons, medals, and flags, all telling stories of past triumphs. The boys at that time worked in the saw mill of Salliotte & Raupp. All their training had to be done at night or early in the morning before they went to work.

In the Montie family there were several boys and three girls. Their father was a blacksmith, and the boys all grew up to be strong and hardy men.

Funeral services were held for Elijah J. Montie, 81 years old and pioneer downriver businessmen and former holder of the amateur rowing championship of the world. He died at his home at 226 State Street, Ecorse. He was born in Ecorse about 1853.

Mr. Montie, who until 1916 ran and managed a hotel on the present site of the Wyandotte General Hospital at the foot of Van Alstyne Blvd., was a member of one of the French families which settled downriver near the beginning of the nineteenth century.

With three of his brothers: John B., William H. and Frank, he attained wide recognition as a rower in 1884, defeating the Hillsdale team to set a new world’s record for four man boats over a mile and one half course on the Detroit River. Only one member of the team, John, survives.

The requiem mass was read by Msgr. Raymond champion at St. Francis Xavier Church in Ecorse and he was buried at Holy Sepulcher Cemetery.

John B. Montie, the last of a famous crew of oarsmen who brought national and world championships to Ecorse more than half a century ago, died in his home at 1483 West Jefferson Avenue in Ecorse in 1934.. He was 74 years old.

His three brothers William, Frank, and Elijah, who pulled the other three seeps in the championship boat all are dead. Elijah died about a year ago.

The brothers, members of a pioneer French family in the Downriver area, worked in a
lumber mill, Salliotte and Raupp, in their early days. They saved their money and bought a four oared racing shell to replace the barge they had been using when they rowed after hours on the Detroit River.

In those days four oared shell racing was very popular and when the Montie brothers entered a race in new York – their first real contest – they were meeting some of the best crews in the country. They won easily and they went on to win the national championships.

Then came their greatest victory over a four oar team from Hillsdale, Michigan, which had toured Europe without a loss.

After this victory the brothers rowed in many parts of the country, defeating all others until their shell broke in the choppy waters of the Hudson River. They patched the shell and their children used it.

Mr. Montie was in the lumber business for most of his life and he was ill for nearly three years.

He was survived by two children, John B. Montie, Jr., and Mrs. Elsie Stover, both of Ecorse. Funeral services were held in the St. Francis Xavier Church and burial was in Holy Sepulcher Cemetery.

Richard A. Montie old time resident who lived to see Ecorse grow from a farming community to a thriving industrial city, has found a resting place in the soil on which he was born and raised and grew to love so well.

The aged pioneer died at the age of 91 at his home, 4337 West Jefferson, on the Fourth of July. Death was attributed to old age. He had been confined to his bed for one week.  It was a strange coincidence that his death occurred at the very time his beloved city was celebrating its homecoming jubilee and Ecorse servicemen were again bringing Ecorse rowing supremacy. Mr. Montie was a member of the old ten oared barge crew that was a forerunner of the later championship crews his famous brothers sponsored back in the 1870s.

Mr. Montie was the fifth child in a family of ten, and was born in Ecorse Township on February 6, 1855.  His father, John Baptiste Montie, settled in Ecorse after leaving Quebec and married the former Amelia Goodell of Grosse Isle.

Their son John, grew to manhood and married the former Eliza Cicotte and raised a family of three sons and two daughters. After a stint of farming, Mr. Montie was employed by the D.T. & I. Railroad with whom he remained until his retirement some 25 years ago.

He was described as a man whose chief interest was in his church and his family. He was a charter member of the Holy Name Society of St. Francis Xavier parish. At one time, Mr. Montie was a member of the Ecorse Township School Board, District No. 3.

Mrs. Montie preceded her husband in death some fifteen years ago and two sons, Richard and Benjamin, are also dead. Mr. Monte is survived by two daughters, Mrs. E.R. Labadie and Mrs. Bella Durocher; one son, Joseph; a sister, Mrs. Emma Rogers of Detroit and 11 grandchildren, 16 great-grandchildren and one great great grandchild.

Services were held from the residence at 8:30 a.m., last Saturday and from St. Frances Xavier Church at 9 o’clock. Requiem mass was celebrated by Rev. Monsignor T.G. Morin and burial was in Ecorse Cemetery.

Fire Chief Milton Montie and Ecorse Grew Up Together

Fire Chief Milton Montie had the distinction of being the last person to be employed by the Village of Ecorse. He was appointed to the Fire Department on January 19, 1942 and Ecorse officially became a city on January 27, 1942, when the city charter was adopted.

Milton was born into both a pioneer Ecorse family and a firefighting tradition. His father was an Ecorse firefighter in the 1920s when the city’s firemen were also policemen.  “I used to hang around there all of the time,” he recalled.

Milton’s father, Benjamin, was killed in a shoot-out with bank robbers at Robber’s Roost on the Ecorse waterfront in 1924. “Chief Albert Jaeger killed the bank robber that shot my
father,” Milton recalled when telling the story.  He recited details down to the names of the
robbers.

A year after he joined the Ecorse Fire Department, Milton entered the Army, where he was one of a 37 man detachment that landed in Italy with the infantry. For nearly two years he
served as senior officer of a group that extinguished fires at major seaports and supply depots throughout Italy and North Africa. Milton served in the Army until December 1, 1945, and then returned to his job with the Ecorse Fire Department.

Three Ecorse fires blaze in the chief’s memory:  the Union Carbide fire in 1961 involving an oxygen explosion that killed three people; the Linde Air Company fire of 1962 and the Chase Apartments fire of 1972, where six people died. He considered these fires the worst in Ecorse history. “We spent five days looking for bodies after the Chase Apartments fire,” he remembered. Personally, he said that he had a few close calls. “There was that fire in a plastics factory at 256 Salliotte. “Everything was going fine, and then there was this big explosion. If I’d been 20 feet closer, I’d be dead.” But the Chief was fortunate. His only serious injury was while he was fighting a coal fire and burnt his foot severely.

During his years with the Ecorse Fire Department, Milton was a member of the Arson Squad and a training officer and Civil Defense liaison, taking an active part in Civil Defense work since 1951. He was an outspoken advocate of fire prevention and revived the annual Fire Prevention Week programs in the public schools.

In 1966,  Milton received the distinguished service award for civic services from the Ecorse Kiwanis Club. He could usually be called upon to head up functions and civic activities. In July 1977, he was chairman of the successful Ecorse Water Festival.

In 1977, Milton decided to retire, since the Ecorse Fire Department required firemen to retire at 60 and his 60th birthday was on September 3, 1977. “I was thinking about retiring July 11, and then decided against it. I decided to hand in my resignation today,” he said in
the third week of July 1977.

The day of Milton’s retirement, Roosevelt (Rudy) Lackey, an Ecorse Police and Fire Commissioner, reminisced with the chief in his office. Lackey said, “He will be missed by many. I hope we can fill the position with a man in his footsteps.”

Deputy fire Chief Jim Clemons was appointed to be acting fire chief until the position was filled. As for now civilian Milton Montie, he planned to take a vacation at his cottage near the Au Sable River in northern Michigan. After that he said, “Well, I’d like to keep working the fire prevention field. I’ve been so active for so long I can’t keep still.”

Milton Montie died at his Roscommon cottage in northern Michigan in December 1986.