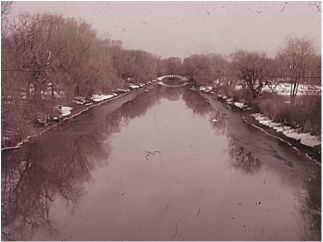 During the January 1951 thaw, eleven year old Dorothy Hollobaugh of 23 West Woodward tested the thin ice of what passed for an ice rink on Ecorse Creek and fell into the frigid water. As she was sinking for the second time on the afternoon of Saturday, January 20, one of her friends came to her rescue. Charles Hawk of 400 Labadie Court crawled over the ice to reach Dorothy and plunged into the water himself. Somehow he managed to reach shore, dragging Dorothy with him. Both of them were dripping wet and shivering cold, so Charles took Dorothy to his house to dry out. As soon as the shivering children entered the back door, Harold Hawk, Charles’ father, greeted them at the door. Harold thought that the two young people had been playing near the forbidden creek and had merely splashed themselves with water, so he delivered a stern lecture.

Charles and Dorothy retired behind the Hawk garage to confer about their problem. After considerable consultation and realizing the hopelessness of their situation, Charles went back into his house and told his father the truth. This time his father recognized him as a hero and he and Dorothy were hurried into the house to thaw out.

In recalling her experience, Dorothy said, “I dreamed of Heaven and dreamed of hell as I was going under the water. I didn’t know how it was going to end up.”

Six months later in July of 1951, a Mr. Fowler who lived at 4630 Ninth Street rescued two year old Brenda Crider who had fallen into Ecorse Creek. Brenda’s mother had missed her late on the afternoon of Thursday, July 12. She sent her son Michael, 5, to find his sister and he ran back home and told her that Brenda had fallen into the water. In the meantime, Mr. Fowler heard children standing along the bank of the creek shouting that someone had fallen in. He rushed to the spot and saw Brenda in the water. He waded in to rescue her and pulled her from the water, still conscious.

The Vacationland was built in 1952 by Great Lakes Engineering Works located in Ecorse, Michigan, and sold to the State of Michigan’s Department of Highways for $4,745,000. She first operated across the Straits of Mackinac, between Mackinaw City and St. Ignace. When a bridge was finally built in 1957, the Vacationland was inactive for three years.

In 1959, the Detroit-Atlantic Navigation Corporation bought the vessel and renamed her, Jack Dalton. For the next year the ferry was used to transport trucks between Detroit and Cleveland. In 1960, the Jack Dalton was “seized…for non-payment” and given back to her first owners.

In 1961, the Jack Dalton was bought by the Compagne Navigation Nord-Sud, Ltd., based in Rimouski, Quebec. They renamed her the Pere Nouvel and operated her across the St. Lawrence River between Rimouski and Baie Comeau until 1967.

B.C. Ferries purchased the Pere Nouvel in 1967 for $1,690,000. She was renamed Sunshine Coast Queen and put on the Horseshoe Bay-Langdale run.

B.C. Ferries retired the Susy Q. in 1976, and sold her in 1981 for $1.3 million dollars. The Sunshine Coast Queen was sold to Gulf Canada Resources Inc. and renamed Gulf Kanayak.

In September 1950, the Ecorse Kiwanis Club marked another milestone in its history of service to the youth of Ecorse. Its board of directors authorized the expenditure of $1,500 for constructing another Kiwanis sponsored wading pool in Ecorse.

The pool will be located at the corner of Sixth Street and Southfield and the Ecorse Engineering Department will supervise its construction.

The Ecorse Kiwanis Club sponsored building the first wading pool in Ecorse in 1946 when it contributed $2,500 toward constructing the pool located on the Municipal Athletic Fields.