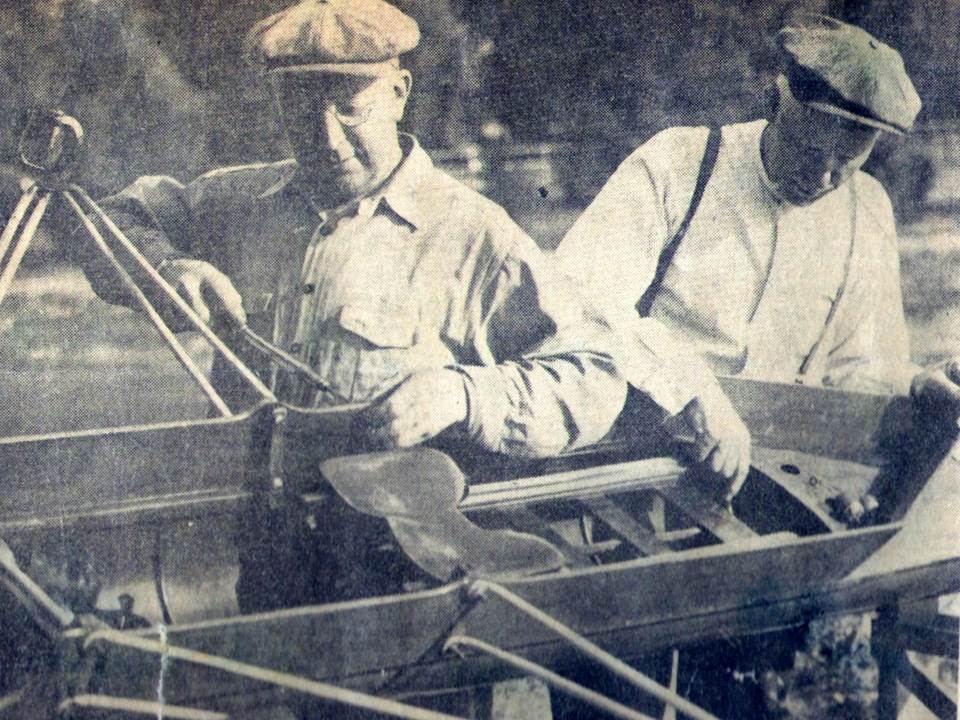 Carl Peterson (left) and Thomas Gannon.
In the 1940s and beyond the Ecorse Boat Club members vied for championship titles in shells that they made. A score more or less of Boat Club members could be found any weekday evening busily building new boats and repairing others.

In January 1940 brothers William and Lewis Tank repaired boats and helped build others. They were helping to build seven singles and a double and did repair work on two eights and another double. A single shell cost approximately $350 in 1940 and it cost about $125 for the club members to build their own shell complete with oars. It took about 100 hours of labor to complete a single shell composed of four kinds of wood – spruce, mahogany, three-ply ash for ribs and cedar Most of the club members were factory workers and built and repaired shells and  rowed as a hobby.

Carl Peterson learned his trade as a cabinet worker in a piano factory in Goteborg, Sweden. He had been working at his trade for a long time before he came to the United States and began working at the Detroit boat Club in 1928.

Thomas Gannon came to the Detroit Boat Club in 1914 and spent the next 38 years there building boats and shells. He immigrated to the United States from Paris, Ontario with his parents when he was a teenager and had been in sailing since he was a young boy. He developed his skills on jobs in boat works on the Detroit River front.  He became an expert boat builder.

Detroit Boat Club’s head rowing coach, Divie Duffield, hired Gannon in 1914 and the first shell he ever built was an eight-oar boat 61 feet long. After that first shell, Gannon went on to build more than $100,000 worth of shells and his work was so highly regarded that top rowing people of the United States and Canada sought he advice which he gave freely.

Gannon was the head rigger for the U.S. Olympic rowing team of 1928, and also created the slender, streamlined shells that comprised modern rowing equipment. He ranked with George Pocock and Frank Davy as the shell builder and Detroit Boat Club and Detroit Rowing Club crews pulled oars on his eights, fours, singles and doubles. He also invented a gateless oarlock and an adjustable rigger. He never built a shell from a blue print or a drawing. Everyone was an “original Gannon” and their qualities were so highly regarded that the top rowing people of the United States and Canada sought his advice which he gave freely. Rowing shells were not the only items he invented. He also designed and built sailboats and cruisers.

Together Peterson and Gannon constructed six eights, two fours, three doubles and several singles, all of which were in use. “We been workin’ together 11 years and we ain’t had much lip. Too busy,” Gannon said.

In 1940 the Washington crew that had recently swept the collegiate rowing field at the Poughkeepsie Regatta, stopped in Detroit on the way to the big race and examined a shell that Peterson and Gannon had built. Gannon who did the talking for the two of them commented, “They said they liked the boat.”

The Peterson-Gannon duo fashioned boats for 31 years. According to coach Jim Rice, no one was better at the boat building craft than Gannon and Peterson. They did more than boats, they “hovered” over them he said. They made the keels from spruce and from Spanish cedar and from British Columbia white cedar they constructed the hulls. An style of crew craft, wither it was an eight oared job like the one which fascinated the Washington eight or the tiny single shell for the sculler. The duo also did other jobs around the Detroit and Ecorse Boat Clubs, including hanging wall paper, blacksmithing, painting, piloting a boat, sharpening saws, repairing watches and even a turn in the kitchen. But they were happiest with a boat to be made.

In 1945  Detroit and Ecorse rowers gave a great testimonial banquet for Gannon and read some of the names of people who admired Gannon and whom he had helped. They included  Jim Rice, Fred Standish, Roy Pingree, Jud Ross and Bill McBreely.

Another memorable day in Gannon’s life occurred when his wife Minnie died in 1944 and he told Jud Ross that he was through and that he would neither build, repair, nor letter another shell. Ross said, “Tom, if Minnie were alive she would say you are talking through your hat and that you know the Detroit Rowing Club needs you.”

The grieving Gannon answered, “All right Jud, as long as you are the coach we’ll stay together and work on.”

And the two did until Gannon suffered a stroke and died in August 1954. 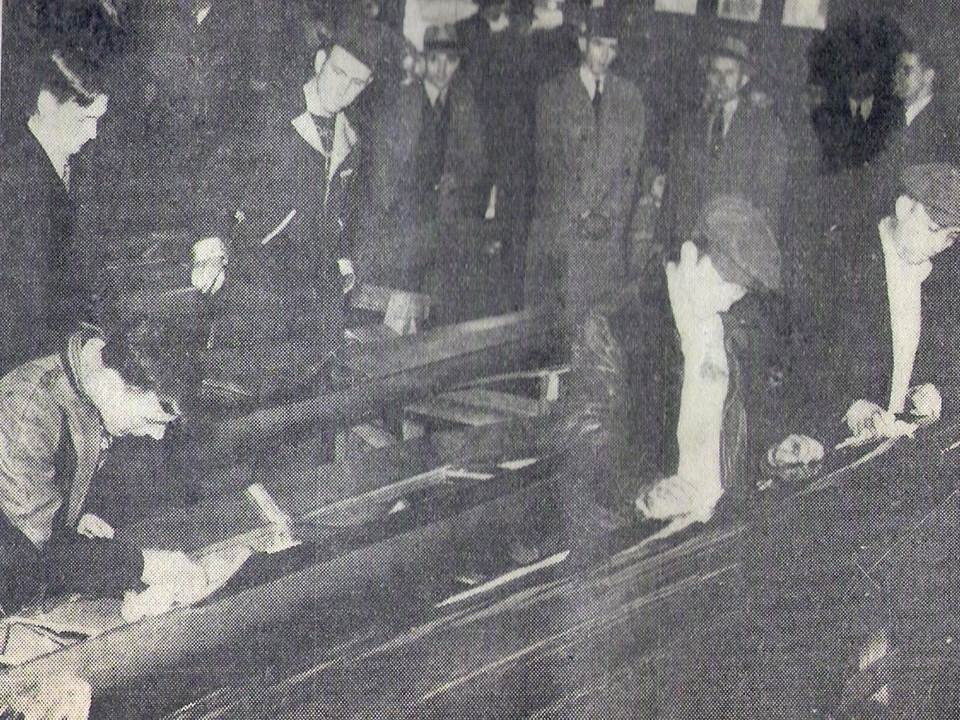