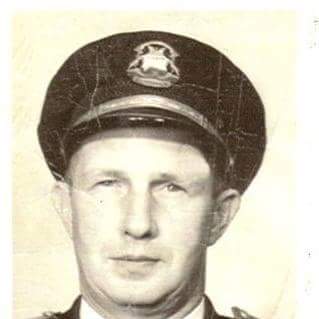 ​Richard Gould Oldfield was born  on March 25, 1913, in Grand Rapids, Michigan to Mary Madrilla Oldfield nee  Mellefont, age 31, and Lacy Richard Oldfield, age 30. His father and mother were from upstate New York; his father worked on the railroad until he became disabled. To further complicate things his father died during the flu epidemic of 1918.
The Oldfield Family has roots in American history. The first to cross the Atlantic was George Soule, a tutor a tutor for the Edward Winslow family children. Early Soule marriages included the Brownell and Irish families. By 1650 John Oldfield was living in the area of the Hamptons on Long Island. The Oldfields married  into the early Dutch families of Grassett and Pele.
After the death of his father, Richard's mother took a job as a housekeeper for a widower with children, William H. Frankhouse of Alexis St in Ecorse. They married and had children of their own. Richard Oldfield attended schools in Ecorse and graduated from Ecorse High School in 1931. He went to work at Dana Corporation and took night classes at Walsh College. He met his partner in life, Patricia Hart, at a dance in Southwest Detroit. Patricia was from Seaforth, Ontario and was in Detroit visiting relatives. They were married in Goderich, Ontario in 1939.
Richard G and Patricia lived in Wyandotte for a short period then returned to Ecorse. They lived in both sides of a duplex at 186 and 188 Southfield across the street from Baklartz Market, that building was owned by Jimmy Adams. While living there they had three children: Mary Jean, Carol Ann, and Richard Lacy. All three children attended Ecorse Public Schools and graduated from Ecorse High School.
In 1941 Richard began employment as a patrolman with the Ecorse Police Department. Early policemen he served with were Alvin Gillman, Roussant Sancreant, Al Royals, Woody Damron, Louis Audi, Rosco Bobo, etc.
Some of the men that served under Richard Oldfield were John Meinkin, LeRoy Lawson, Rufus Underwood, Charles Taylor, Ernest Molnar, Fermon Fleming, Rosco Simmons, Robert Pongracz, Harold Marcotte, Roland Foss, and James Cosbey.
One event took place on a Christmas Eve when Richard Oldfield was then the desk sergeant. The Greek coffee houses along the River Rouge border would send a huge salad for the police officers. Richard sent his favorite patrolman to pickup the Greek Salad but he failed to return or respond to calls on the radio. Sgt. Oldfield sent another patrol car to check on the missing officer. He then received a desperate call of  “officer in trouble.” A third car was dispatched and it turned out the first 6'6” officer was drunk from too much ouzo. The miscreant officer spent that Christmas eve in the holding cell behind the desk  sergeant's desk but he kept his badge.
He rose through the ranks to retire as the Assistant Chief d of Police. As a Lieutenant an incident occurred that he was always proud of. There was a Grand Jury investigation into corruption in the management of the City of Ecorse and he was the only senior police officer not indicted. He was a man of honesty that was respected in the city and by the men under his command.