Charles Tank and His Friends Reorganize the Ecorse Rowing Club 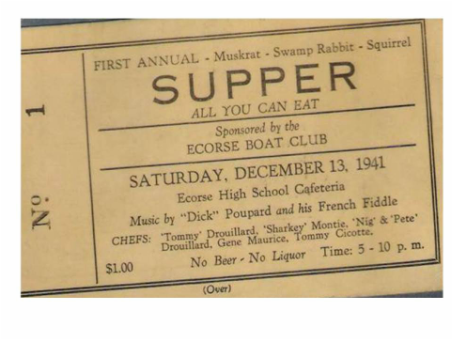 The Ecorse Boat Club disbanded in 1906 and oarsmen from Ecorse raced under the Wyandotte Boat Club Banner, but the colorful memories of the Montie brothers kept alive the Ecorse tradition. Eventually, the grandsons of William Montie, the Tank brothers, and others served as the backbone of the reorganized Ecorse Club.

After rowing with the title crews in the 1890s, Charles Tank watched the Ecorse Rowing Club disband for lack of competition. For seven years he coached the boys in these clubs, including his own sons, to win competitions and helped make the Ecorse Club one of the best in the country.

After the Ecorse Boat Club disbanded Tank continued rowing alone and in the middle thirties, his sons Louis and Red began to row for the Wyandotte Boat Club where he coached them. In late 1938 and early 1939, Charles Tank and several friends reorganized the Ecorse Boat Club, starting out with a $350 deficit for a note to purchase a second hand eight oar shell from the Detroit Boat Club. Charles Tank started out with the vintage shell – built in 1910- and large amounts of faith and courage.

The building that the rowing club used was the old brick building at the South end of Riverside Park that Mellon and Moran had once occupied as an auto, marine parts and machine shop. The east or river side had been adapted to boat repairing and withdrawal of motors and featured an I beam extending over the water to hoist motors by a chain pull. Wayne County bought M & M out, and the building was leased to the Ecorse Boat Club. Club members purchased two eight-oared shells and named them for Genevieve Tank and George R. Fink. These achievements were nearly eradicated by a tornado that whipped through the Downriver area one spring night in 1939, but the Ecorse Boat Club persevered and won the Intermediate “4” in the 1939 National Regatta at Detroit

Overcoming mishap and mayhem, the Ecorse Club struggled to glory by winning race after race. Ecorse won Schoolboy Championships and its lightweight crews won Royal Canadian Henley titles. Tank’s two rowing sons, Red and Louis won sculling event after event and his other sons, Vernon and Pete, also were involved in the Club, Vernon as president and Pete as a top flight boatman.

In 1940, the first Ecorse High School crew appeared on the Detroit River and reigned as undefeated champions of the Metropolitan area at the end of their first season. In 1941 Larry Smith and Pat Messler helped Charles Tank polish the crews that he had guided to championship status by teaching them rowing fundamentals. Even though some of his students did not become members of championship crews, they were the foundation of the Ecorse Rowing Club and passed on what they knew to the next generation of rowers.

Charles Tank died in 1942 and Jim Rice, his close friend and internationally known rowing coach became the director of the rowing program. Coach Rice brought fifty years of experience coaching championship crews with him to Ecorse. His first coaching job was with the Toronto Rowing Club in 1893 and after that he coached the Detroit Boat Club and the Wyandotte Boat Club in the Downriver area. Moving East, he coached at Harvard University, Columbia University, University of Pennsylvania and Havana University. In 1933 he coached the Hamilton Leanders and in 1936 returned to the Detroit Boat Club. When he agreed to coach the Ecorse Boat Club at the request of his friend Charles Tank, Ecorse and almost every other rowing club in the country recognized him as one of the top ranking rowing coaches in America.

After he took over as coach in 1942 the Ecorse Boat Club with Rice at its helm was the crew to beat in any race it entered. The Tank brothers, Louis and Red were still active as scullers and coaches but the younger men were fast replacing the men who started the club in 1938. The club won many races and its trophy room was crowded with medals and trophies, won in Chicago, Philadelphia and all towns where rowing was recognized… The Ecorse High School crew won its third straight race in the third annual Downriver regatta in August 1941. The winning crew consisted of:  George Pappas, stroke; Virgin Ciungan, Harvey Kromrei, Bob White, Reggie LeBlanc, Bob Blair, Earl Newland, Bob Vollmar, bow and front and Bill Hughes, coxswain. The Tank brothers won the 140 pound doubles and placed second in the heavyweight doubles at the Canadian Henley that year and William Tank won second place in the quarter mile dash for singles and Louis Tank won second place in the heavyweight singles.  The Ecorse High School crew cinched the North American championship at the Henley and the 140-pound eight also won its race.

The Ecorse  “Golden Boy’s” of 1942 showed their stern to the best boats in the U.S. and Canada.   In July 1942, Ecorse oarsmen exceeded hometown expectations when they performed like champions in front of a crowd of 25,000 people lining the Detroit Riverfront in the July 4 and 5th races. Even veteran coach Jim Rice who trained the Ecorse crews and usually accepted praise matter-of-factly, glowed with pride at the performance of his oarsmen.  Ecorse won practically everything in the regatta, successfully defending their numerous titles and adding more championships to the Ecorse Rowing Club’s long list of achievements. Crew members added the Junior Point Trophy, the Senior Point Trophy, and the Senior Eight Championship Trophy to the trophy case at the Ecorse Boat Club as well as various plaques commemorating their Saturday and Sunday victories.

At the end of the Saturday events, Ecorse boasted a score of 61 points, 25 points ahead of the Central Rowing Club of St. Louis, its nearest opponent. On Sunday Ecorse continued to pile up points and records. In the first race Sunday afternoon the Ecorse club entered the High School and the 145 pound crews in the senior eight oar race. The High School crew won the race and the Ecorse 145 pound crew came in third place to give Ecorse a 36 point lead. Manning the High school shell were Bob Vollmar, Harold Covert, R. Blair, V. Mitea, H. Marcotte, C. Crunga, H. Kormrei, R. White and Whitefield as coxswain. An hour later this same High School crew came back to win the Schoolboy Championship.

As two of the three remaining members of the original Wah-Wah-Tah-See Club, Alex Beaubien and Elmer Labadie were two of the most interested spectators at the regatta. Alex Beaubien rowed his last singles race in 1889 when he defeated Knight Wright at the Belle Isle races and he also served as coxswain in the ten oar barge.