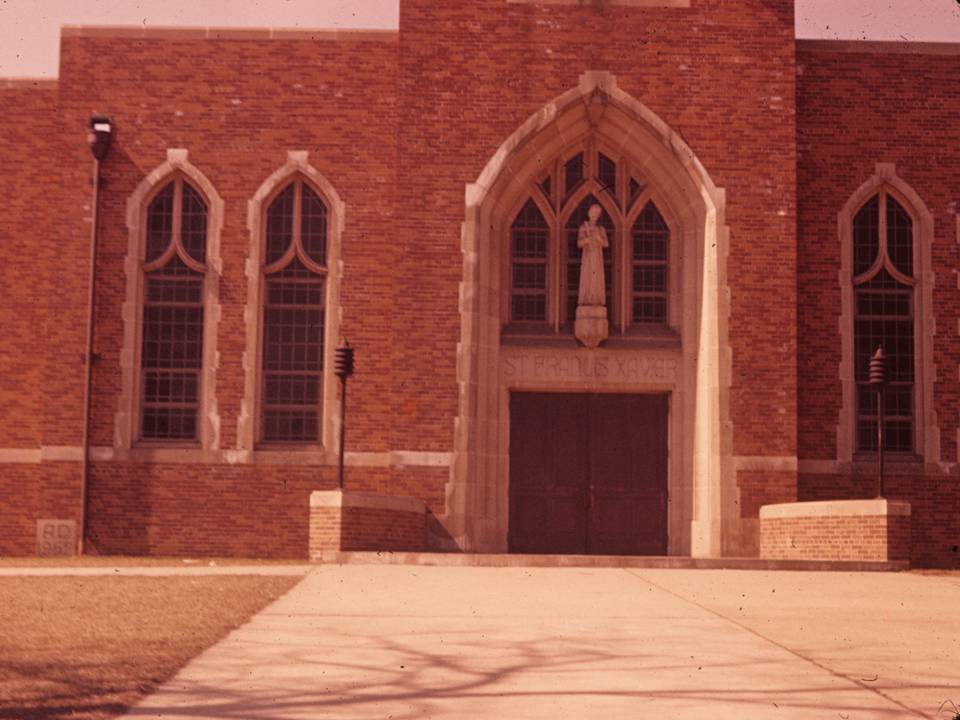 John Duguay was a faithful and long time member of St. Francis Xavier Parish and he took many pictures of the church through the years.

The Ecorse Advertiser of May 28, 1969, recorded an end of an era in the annals of St. Francis Xavier High School in Ecorse.

Its 30th graduating class will open wide its portals, turn their eyes toward their Alma Mater and suddenly realize that this haven is no longer for them. It’s inevitable that they must part and there will be tears in many eyes as not only the graduates but also the lower class men leave its doors for the last time.

Only the grade school will reopen in September. The Catholic financial crisis is forcing the high school to close.

The school building was erected in 1924 under the guidance of Father Tobias G. Morin, pastor, who was later elevated to the rank of the Right Reverend Monsignor. The Sisters of St. Joseph were placed in charge.

Enrollment for the first year was 200, and it increased continuously from year to year. The class of June 1939 was the first graduating class of St. Francis. Some graduates remained in the area and others moved away. Many survived World War II.

The valedictorian and salutatorian of the last graduating class of St. Francis Xavier High School were Karen Schafran and Arlene Chrapko. Karen Schafran was the daughter of Mrs. Andrew Schafran, 1570 LeJuene, Lincoln, Park. She was selected as valedictorian of the graduating class by attaining the highest academic record. Based on 3 ½ years she has attained a 3.5 average, earning 136 honor points and never had a mark below “B.” Karen plans to attend Eastern Michigan University or Wayne State University.

Arlene Chrapko, daughter of Mr. and Mrs. John Chrapko, 3601 Marian Drive, Trenton, former Ecorse residents, was selected as salutatorian. She has attended Xavier of 12 years and during high school has made the honor roll every year. She has changed from a college course to a business course and does not plan to attend college. She will seek employment after graduation.

Mary Ann Price wrote in the Ecorse Advertiser of Wednesday, May 28, 1969, that Richard Morgan, superintendent of the 80-inch Mill, Great Lakes Steel Corporation, was guest speaker at the annual all sports banquet Sunday at St. Francis Xavier School, Ecorse. Highlight of the evening was a film of the Detroit Lions by Leroy (Friday) Macklen, Lion’s equipment manager. This was the last athletic banquet because the high school will close in June.