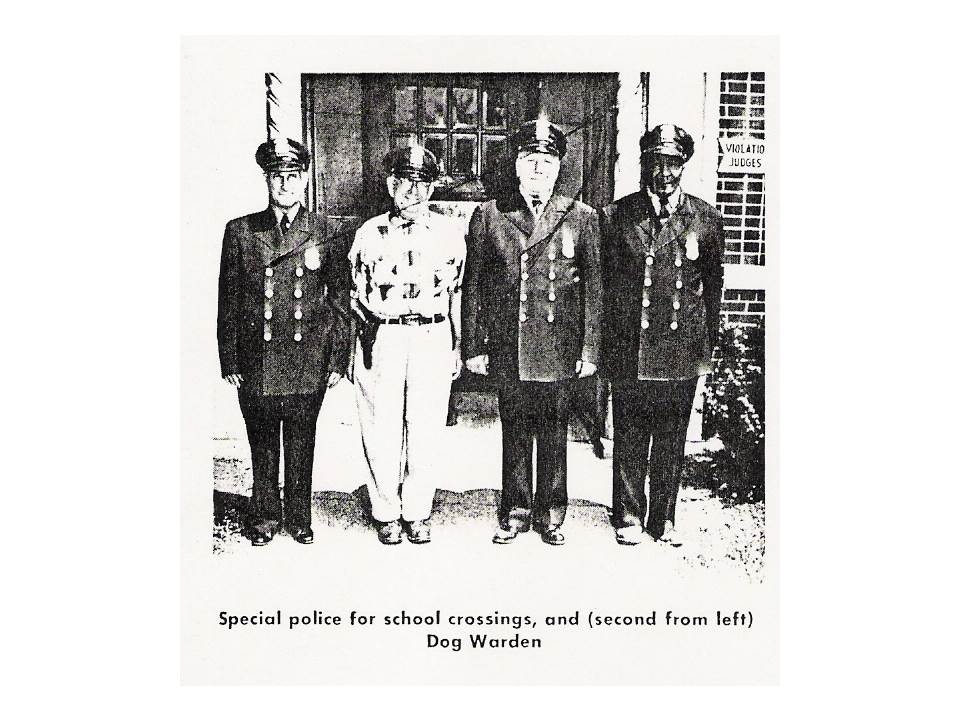 History was made this week as Ecorse opened its ultra-modern second precinct police station at 13th and Salliotte roads.

Although the new building will be officially dedicated with appropriate ceremonies on February 2nd. It was put into use as an addition to the police department Monday at midnight.

Chief of Police Alvin Gillman revealed that twelve men would be assigned to the precinct although other officers from main headquarters would work out of the new station from time to time.

At a meeting of the Police and Fire Commission Monday night a veteran officers was promised to sign and will be assigned to the station.

Promoted to a higher rank was Sgt. Peter Johnson, a veteran of nearly twenty years service. Rosco Bobo, veteran detective lieutenant, asked to be transferred back into uniform.

The building, designed to give the heavily populated west side of Ecorse additional police protection, was built entirely by city workers, saving the taxpayers a considerable sum.

Constructed of block and face brick, the new station is equipped with the latest types of furnishings for a police building.

Telephone communication is provided by means of phones connected with the switchboard at headquarters where all calls are received and then relayed. A remote control transmitter permits the officer in charge of desk operations at the new station to broadcast messages to any car in the downriver police network.

Inspector Woodrow Dameron has been working for several weeks ironing out problems found in the opening of the precinct and is expected to remain at the new building until it is in full operation.

Ecorse’s new precinct station is the first of its kind in this area. Other municipalities operate out of old and cramped main headquarters.

Because of the memory of Rufus Underwood, 26, Ecorse patrolman, Willie James Hawkins, 29, wanted by the FBI on suspicion of murdering a policeman in Tuscaloosa, Alabama, last January 13, is being held in Wayne County jail in default of $50,000 bond set by Federal Judge Arthur a. Koscinski Monday afternoon.

Hawkins was arraigned on an Alabama fugitive warrant charging him with the murder of the police officer. Examination is set for August 18.

The arrest was made Saturday at 10:30 p.m.in front of the Elks Club, 599 Elliott, River Rouge, by FBI agents, Underwood and Patrolman Joseph smith. The Ecorse patrolman handcuffed Hawkins who was working as a doorman, and brought him to the Ecorse Police Department and booked him as a fugitive. When arrested, he was carrying two knives.

Police Chief Alvin Gillman said Tuesday he has instructed his police officers to follow through on the “excellent job by State Police” who conducted a raid early Sunday morning on an alleged gambling room at 4480 West Jefferson.

“I was not aware the place was being used for gambling purposes,” the chief said. “It’s closed now and we’ll make certain it stays that way.”

“Just last week I announced a “get tough” policy is in effect at both precincts. We’re cracking down on vice in Ecorse and the city will be cleaned up and kept clean.”

Gillman has ordered nightly checks by patrolling policemen of all buildings where gambling games have been operated in the past. Reports that illegal games are being run will be checked, he said, and the premises investigated.

“I did not know they were operating a game in that spot,” Mayor Voisine said following the raid. “It was a complete surprise to me. Chief Gillman is on the move now, and woe befall illegal operators if they’re caught,” he said.