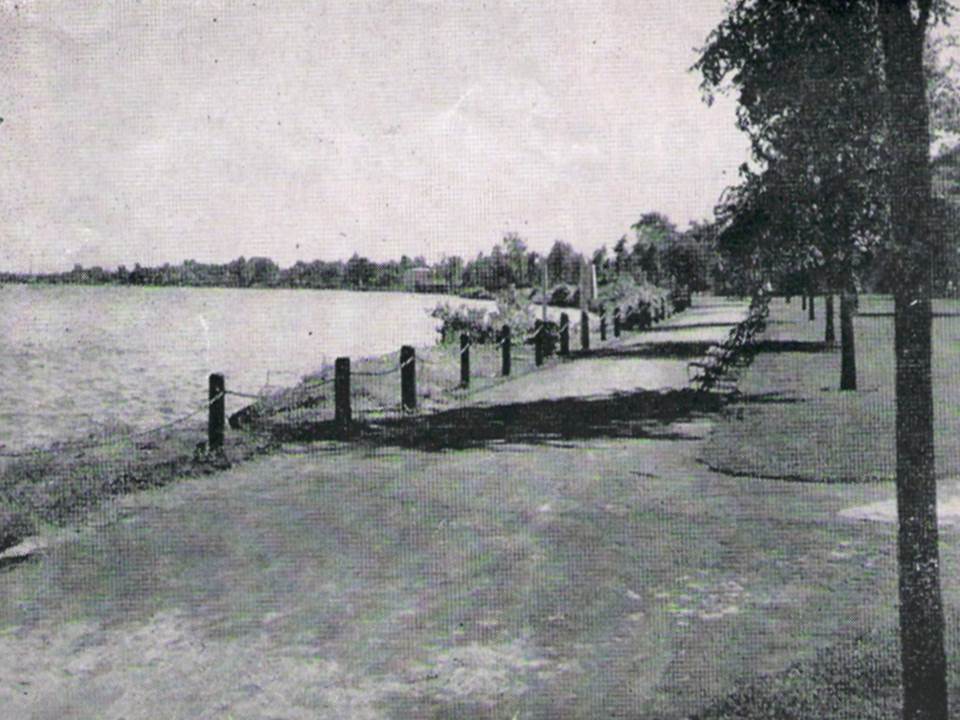 I remember Ecorse as I was growing up in the decades of the twenties and thirties. As as child, I formed many silent opinions and made many quiet observations about this small and rather unglamorous little city. Some of my feelings were ambiguous as I assessed Ecorse. Although I lived in Detroit, my mother made weekly visits to Ecorse to visit her aging father, Joseph Salliotte, and to visit the home of her only brother, Ignatius J. Salliotte.

We would travel in our old Hupmobile past the Rouge Plant on Coolidge. The air was heavily polluted and retained a distressing odor. Turning right on Jefferson we would travel the few blocks to the corner of Jefferson and State Street. State Street is now Southfield Road, but then my Grandfather Salliotte's address was 9 State Street. On the corner were a few stores that backed up to my grandfather's property. I knew that my grandfather owned these stores, but coming as I did from a fairly good residential neighborhood in Detroit. I could not accept the proximity of small stores to one's home.

The house at 9 State Street, Ecorse, was plain and spare. It was made of wood and was quite commodious. For all of its plainness it retained a certain presence. Perhaps it was the wide wood porch that offered a good view of the Detroit River if you looked to the East. Perhaps it picked up some prestige from the two large and black shiny cars parked out in front. These cars were usually a Packard or a Cadillac. The local funeral director was known to borrow cars for his cortege. There was a bank directly across the street, on the opposite corner of Jefferson and State Street. I understood that the bank was very important to my mother, her father, and her brother, Ignatius Salliotte.

The view of the river from the porch also included a rather ugly commercial looking dock, bordered on each side by two dubious looking structures, one a salon named the Polar Bear Cafe and on the south side of the dock was a fish market with large glass tanks. The existence of these two edifices made me question the acceptability of Ecorse as my ancestral home. I knew that the property on which the saloon and fish market sat, and also the wide dock, were in my mother's name as family property designated for her by her father.

The greatest stigma of Ecorse for me was the illegal trafficking of liquor from Canada. This process was called "Bootlegging" and the "Bootleggers" were the men that stole across the river in the middle of the night with their illegal product. Although I was young, I could not accept in my rather prejudiced mind that this "under world" flourished so close to my grandfather's residence.

I remember one Sunday morning during these years that I accompanied my mother and grandfather across Jefferson and viewed the disheveled interior of the Polar Bear Cafe. Tables and chairs were broken and scattered. A walk across the dock to the fish market disclosed smashed tanks and water and fish everywhere. It would seem that the market was a front for the more prosperous business of distributing liquor that went on in the rear of the store. On the Saturday night before, the government agents had arrived. It was some solace to me to learn that the stores were rented out and the family had no real confirmation that anything untoward was going on. Rental income was the only concern.

Although we were proud we descended from pioneer settlers of Ecorse, my brother and I never stressed to our contemporaries that we were from "downriver." The pollution, the bootleggins and the tiny homes of the factory workers always presented a not too successful locale to be from.

When I was born in 1917, my grandfather was already old. He was 79. He was the fifth generation of his family to be born to the French families of the Detroit River Region. I remember sitting on the wide front porch as my grandfather rocked in his chair. He would tell us legends about his father and grandfather, how they climbed into the lofts at night while the Indians came in to sleep by the fireside below.

My grandfather would arise early every morning and walk to the "subdivision," small houses he had built on the land he had inherited. He would collect the rents by a sort of door-to-door canvassing method. The personal appearance assured more prompt payment. After depositing the rent money in the bank on the corner he would return to his post on the porch. He would greet and call out by name the man passers-by. I can hear him yet in his rather poitoi French accent, "Bon Jour, Monsier LeBlanc, Bon Jour, Monsier Labadie." Sometimes the strollers would climb the steps to the porch and talk to him in their peculiar French dialect.

My grandfather's sister Anne Salliotte lived behind his house. Her name was Anne Salliotte and she had married her cousin Oliver Salliotte. Many of the old French families of Ecorse married one another's families in each following generation.

Down the street from 9 State Street was the Alexis Moses Salliotte house. he was my grandfather's brother. The house was the only approach to elegance that I remember Ecorse having. It was classic gingerbread Victorian with a cupola and stained glass windows. Uncle Alex had owned a lumber mill that legend has it, formed a slag for what later was called "Zug Island." Uncle Alex had died in 1905 and during the 1920s the house was occupied by several of his daughters.

They were schoolteachers. One frail grandson lived with his aunts. His mother had died when he was an infant. My brother and I were fascinated with the Victorian house and after tiring of sitting on the dock we would visit our cousin. He was in poor health most of his short life and he used to lie on a couch in the library and share his many books with us. When he died it was as if the rest of the strength and life of the old house died with him.

(Dorothy cites 1980s articles in the Detroit News and Free Press proposing development plans for Ecorse and the Downriver area, plans that she and her family support.)

Dorothy writes, "I am particularly pleased that the development agency has targeted for development 120 acres at the foot of Southfield road in Ecorse, right on the former site of my grandfather's old wood house and the bank across the street and the little stores on the corner of Jefferson and State Street (now Southfield), and of course, the site of the Polar Bear Cafe, the Dock and the fish market.  Perhaps the second millennium will fulfill the dream that the first settlers of Ecorse and all of those who have lived there since, that living so intimately with such a great river could only bring success and happiness."