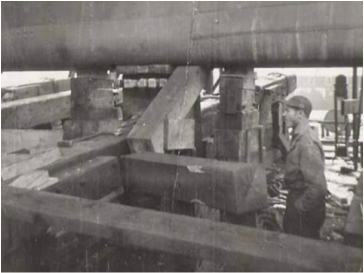 Anthony Pessano came to Ecorse with a far-sighted dream of building a shipyard on the Detroit River across marshes where muskrat enjoyed full reign. An equally farsighted in the capitalistic sense – old Ecorse Frenchman sold him some of the marsh acres with one condition.

Officially, Anthony Pessano didn’t record his answer, but the marshes continued to yield muskrat for the famous muskrat dinners that Downriver restaurants served for so many decades. It is probable that Pessano granted the Frenchman’s request and that the Frenchman and his heirs kept part of the family property bordering the Detroit River for them selves and the muskrats.

Anthony Pessano’s dream of a shipyard on the marshes also came true.  In the 59 years between 1902 and 1961, The Great Lakes Engineering works ship yard built most of the large freighters in the Great Lakes fleet. Altogether it turned 303- some sources estimate 338- vessels, and at times employed as many as two thousand local workers when a multi-million dollar vessel needed to be built. The Engineering Works constructed ships for the United States Government in World I and World War II and also built the cruise shipsNorth American and South American, the state ferry Vacationland later called the Jack Dalton and eleven sections of the New York Central tunnel under the Detroit River.  TheEdmund Fitzgerald is probably the most famous ore carrier that the Engineering Works built but the names of many of their other vessels such as Carson J. Calloway,  Ann Arbor No. 6, and Arthur B. Homer earned niches in Great Lakes maritime history.[2]

In 1961,The Great Lakes Steel Company in a move that some would call irony and others progress, bought the Great Lakes Engineering works for a sale price of $3,500,000 as part of its expansion program.  In an April 30, 1961 article in its pictorial magazine, the Detroit News lamented that “It’s the End of an Era”.  Detroit had ceased to be a shipbuilding center with the sale of the Great Lakes Engineering Works and there was only one major Michigan shipyard left – the Defoe Shipbuilding Company in Bay City. Ships from other companies now handled most of the ore that Antonio Pessano and the American Shipbuilding Company had founded shipping empires to build vessels to transport up and down the lakes. American steamship companies now bought parts or whole ships in cheaper yards abroad. The time honored tradition of shipbuilding along the Great Lakes was passing into history on ways figuratively greased by the very men who spent fortunes and careers building them. [3] Part of the reasons for the demise of the shipyards was their very success- they priced themselves out of the market so to speak- and the stifling effects of the iron and steel and shipbuilding monopolies on competition and diversification.

The Iron and Steel Men

George Fink, a steel man from the East who founded Michigan Steel Corporation in Ecorse, Michigan  in 1928 and expanded it to Great Lakes Steel in 1929, had a great deal in common with Antonio Pessano who founded Great Lakes Engineering Works, the company that Great Lakes Steel later would buy.  For both men, the bottom line was controlling the production of iron and steel. Like George Fink, Antonio C. Pessano was born in the East. The son of Antonio D. and Elizabeth Pessano, he greeted the world in Philadelphia on July 3, 1857. His parents provided Antonio with a broad education at Philadelphia High School, Franklin Institute of Technology and later with private tutors in mechanical drawing, chemistry, and mathematics.  Shortly after his 33rd birthday in 1880, Antonio married Elizabeth A. Walker in Philadelphia on September 22 and was well on the way to establishing his business career.[4]

Pessano first put his education to work. For seven years he worked at the foundry trades and among the machines and carried his tin dinner pail.  Eventually he successfully managed the iron and steel shops at Cresson. Pessano’s success at Cresson gained him industrial acclaim and he ultimately came to Detroit. He saw the Ecorse-River Rouge District as”a little Pittsburgh growing up.” He worked to attract railroads to the area, to buy land cheaply so he could build them, and to develop enough coal storage facilities to tempt freighters to stop. John Hubert Greusel wrote admiringly of Antonio Pessano in theDetroit Free Press of November 1905 that he headed a co-operative movement composed of owners of 500 shops throughout the country called the National Foundry Association. The goal of the National Foundry Association was business protection. The iron and steel trade could oftentimes be tumultuous because its workers were very independent, earned high wages and insisted on collective bargaining. They were devoted to their craft, but quick to protest against poor working conditions. As Greusel put it:

Working in front of roaring furnaces, breathing fumes and handling burdens of iron or steel is a life that kills. It takes a strong man to meet these fellows in a controversy. Pessano is the man. [5]

The owners of the 500 companies of the National Foundry Association depended on Pessano to keep the iron and steelworkers happy and productive. On several occasions Pessano’s grasp of the issues, his common sense and firmness helped prevent serious labor troubles.

By 1902, Pessano had learned mechanical drawing, technical engineering, and mathematics.  He had mastered building engines, ships, and took out a score of patents for his improvements in power transmission. In 1901-1902 he moved to Michigan to take over the former Samuel F. Hodge & Company. Samuel F. Hodge, founder of Samuel F. Hodge & Company, marine engine works, immigrated to America in 1849 from Cornwall, England after working as a blacksmith for several years. After a brief stay in Toledo, he came to Detroit to work on the construction of the fortifications at Fort Wayne. After Fort Wayne was completed he worked in a blacksmith shop at De Graff & Kendrick’s Iron Works, at a locomotive works and sold mining machinery for Lake Superior mines. In 1863 with some partners, he organized a firm of his own to manufacture engines and machinery. Hodge served as president of his company until his death in April 1884 when his son Harry S. Hodge assumed the presidency.[6]

The company was located at the corner of Atwater and Rivard Streets in Detroit and boasted several progressive innovations for its time. The main buildings included a foundry and blacksmith shop, a machine shop and equipment included an electric crane, and a surface railroad. A library containing texts books, statistics and reports, drawings and blueprints pertaining to the marine engineering trade was located in the private office of the president.

In the approximately thirty years the company had been in business it produced over 125 marine engines nearly all of which were in service on the lakes, as well as repair work and stationary engines. The company made the first triple expansion engine on the lakes for the Roumania and installed it in October 1886 as well as the engine for the Colgate Hoyt,the first of Captain Alexander McDougall’s whaleback steamers built at West Superior. The company built other whaleback engines, including the one in the steamer Wetmore that crossed the Atlantic to Liverpool and the engine for the excursion steamer Christopher Columbus of Chicago World’s Fair fame.[7]