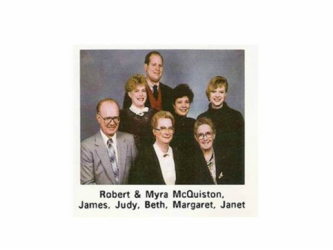 Dr.Robert McQuiston grew up in the Ecorse of Mayor William Voisine, Dummey’s Pool Hall and the old red brick Ecorse Presbyterian Church. Over half a century later, from his office on West Jefferson that sits only a few blocks from his old homesteads on Applegrove, and Union Streets, he considered the contours of Ecorse History and how his own life fit into them like a jigsaw puzzle piece.

In 2006, he celebrated his fiftieth year of practice in Ecorse. As well as maintaining a private practice and caring for some patients for over fifty years, Dr. McQuiston has also served as Health Officer for the Ecorse Police Department.

Born in Ecorse in 1927, the future doctor attended School One, and later School Two and it just takes a word or a question to release a memory mobile of some of the smells, sights and sounds of growing up in Ecorse in the late 1930s and 1940s. Dr. Bob remembered taking off his shoes as soon as the snow melted off the ground and keeping them off all summer. If his shoes needed to be repaired before school started, he and his mother would take them to the shoe maker on Jefferson to get new heels or whatever else they needed.

Shoes can also be taken off for effect, which Bob and his friends did, along with their socks in the closed up rooms of the winter school after sledding or walking in the snow. They would put the socks on the radiator and the shoes next to it and wait for the steam to waft the odors of multiple wet socks and shoes throughout the building.
“I can still smell them,” he said with a twinkle in his eye.

Other sights of Ecorse that he saw in his early years were the Southfield and Outer Drive Viaducts, and the Ecorse water front. The Ecorse Library he remembered in its former location in the old city hall on High Street, before Mayor Voisine led the campaign for a new library on the corner of Outer Drive and Jefferson. He said that the old city hall on High Street itself. “had a personality all its own. I liked that building,” he said.

The sounds of Ecorse then and now that he remembered and still appreciated were the sounds of train whistles and the trains rumbling down the tracks and the St. Francis Church bells. Boat whistles on the river-there used to be a symphony of them almost every day, especially the Bob-Lo boat.- made him smile.

The unwritten but scientific genealogical law of Ecorse says that almost everyone is a relative, shirt tail or otherwise. Dr. McQuiston’s family follows this law of Ecorse. His mother was a member of the McMurdo family and Fergus McMurdo, an uncle of his, was killed in action in World War II. Fergus had been in the service for just thirteen months when he was killed in action at Graylotte, France on November 15, 1944. He was posthumously awarded the Bronze Star and. Reverend Leonard Duckett, the minister of the Ecorse Presbyterian Church when Bob was baptized and grew up in the church officiated at the reburial of Fergus McMurdo in July 1949. His name is inscribed on a plaque on the brick wall of the Ecorse Presbyterian Church that commemorates members who were Ecorse veterans.

“I didn’t get to serve myself,” Dr. Bob said, a touch of regret in his voice. “I was still a tad too young.”

Instead, Dr. Bob pursued his education, and a few years later while in Medical School in Iowa, his life partner Myra Dressen .After graduating from Wayne State University with a degree in Chemistry, he moved to Iowa to attend the University of Des Moines where he earned a Doctor of Osteopathy degree, specializing in General Practice.

The McQuistons were married in August 1953 and celebrated their fiftieth wedding anniversary in August 2003. They have three children, two daughters and a son. Beth is a nurse and Margaret a doctor with an office in Brownstown. Son Jim and daughter in law Judy have given the McQusitons two grandchildren, Michael and Jim.

After returning to Ecorse in 1956, Dr. McQuiston located his office near the barbershop on Jefferson Avenue before he built his present office. He added his name to a long and distinguished list of Ecorse Doctors. The 1860 census records for Ecorse reveal that in the 1860s, a doctor practiced in Ecorse. His name? Dr. Comfort.

In the 1920s and 1930s some of the Ecorse doctors were Dr. Van Becclaire, father and son, and Dr. Durocher. The medical roster for Dr. Bob’s colleagues of the next twenty years included the names of Dr. Lee Hileman, Dr. Kembler, Dr. Sledak, Dr. Peyette, Dr. Knox, Dr. Tegnegley and Dr. Thornton.

Through the years Dr. McQuiston has treated Ecorse residents both political and non-political.  He remembers George Coman, who was city assessor and then mayor of Ecorse from 1974 until he died in December 1975. “He fought cancer bravely,” he said.

According to Dr. Bob, Dr. Lee Hileman delivered generations of Ecorse babies and when the doctor was late or couldn’t get there, often nurses like Miss Buelah Hill would help deliver babies and treat people. He foresaw a good future for doctors in Ecorse and across the country,  predicting that by 2020 there will be a  nationwide shortage of 85,000 doctors in primary practice.

Dr. Bob had some definite ideas about Ecorse- past and future. He believed that the proliferation of shopping malls, beginning in the late 1950s encouraged Ecorse residents to move further out into the suburbs. He sat in his office with his diplomas in the background, counting off some of the businesses that used to flourish in Ecorse. Roth’s Department Store. Slavin’s Dress Shop. Ben Franklin. Affholters Dairy. Seavitt’s Drug Store.  Simko’s Market. Kroger’s. A & P.

“Anything you wanted was within walking distance. I remember walking to the grocery store with my mother during World War II.”

He also remembered the Poultry and Egg Store on Jefferson where people would buy freshly killed chickens and eggs. The businesses declined when the population shifted.

He attributed some of the problems of Ecorse to its rough and tumble politics. He remembered that Mayor Voisine founded a steel company and sold rejected steel as a good product, but he also talked about the positive contributions that Mayor Voisine made to Ecorse, including the Ecorse Public Library, the Post Office, and helping to finance the Ecorse Boat Club House. He talked of recall elections and politicians accepting money they shouldn’t have.

According to Dr. Bob, Ecorse and the rest of the Downriver area will always have people who enjoy living along the Detroit River, even though the majority of businesses and people continue to move to the outer suburbs “Ecorse has always had a complex, but I love it and I intend to stay here.”

In 2005,  life turned the tables on Dr. Bob and he became a heart patient for a few months. In his case, the cliché that says doctors are not good patients is true. “I couldn’t wait to get back to work,” he said. “I’ve had wonderful patients through the years. Ecorse has treated me very well.”

Dr. Bob passed away in 2007, but he is well and fondly remembered.