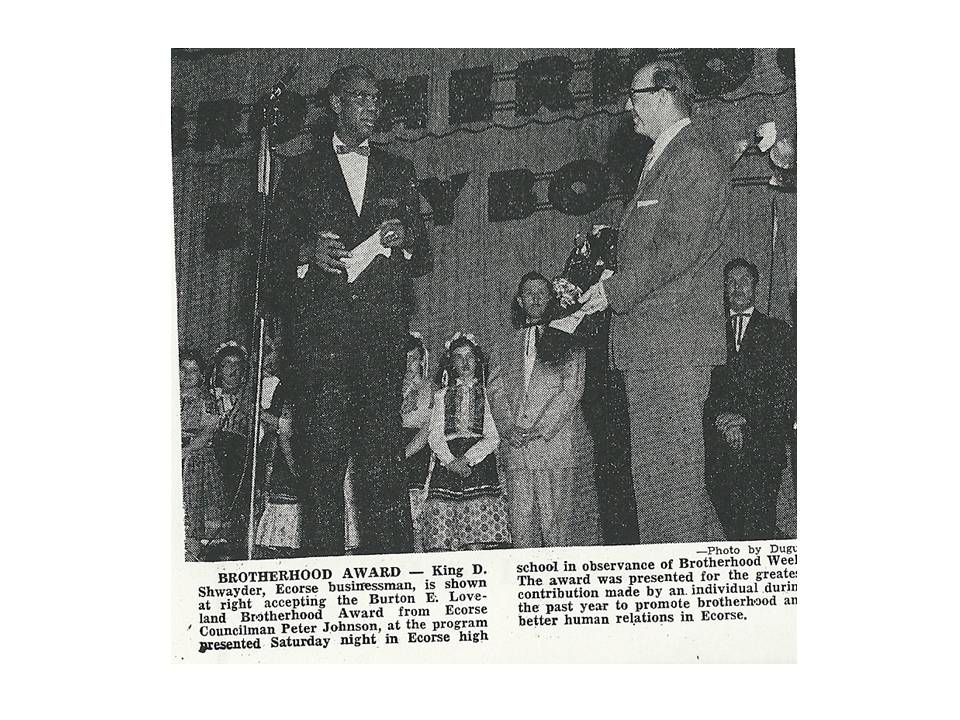 Since the first celebration in 1956, Ecorse usually celebrated Brotherhood Week the third week of February. Some of the early Brotherhood Week programs were held in the Leonard Duckett Center of the Ecorse Presbyterian Church.

The purpose of Brotherhood Week was to promote friendship and understanding between persons of all races, creeds and colors.

The second annual celebration of Brotherhood Week took place on Wednesday, February 20, 1957 at the Leonard Duckett Center of the Ecorse Presbyterian Church.

B.E. Loveland, chairman of the committee gave the welcoming address.

After dinner, served by the Womens Fellowship of the Ecorse Presbyterian Church, the guests joined in a community sing.

Louis L. Friedland, professor at Wayne State University, the main speaker, discussed municipal government and community organization structure. He defined the nature of municipal government and its role in the lives of the people, and suggested how various organizations functioned to support the political life of a community in a non partisan way.

When Professor Friedland finished speaking, the audience broke into small groups, each with a leading citizen as spokesman and discussed municipal government and how citizens can work together for the betterment of the community.

Several weeks before the banquet, the Community Relations Committee contacted organizations in Ecorse and suggested that they devote an evening to promote the spirit of Brotherhood.

Tickets for the dinner were $1.50 and were offered for purchase from Benjamin Goodell, Miller School Principal, and at Loveland’s Pharmacy at 4030 West Jefferson.

On Saturday, February 21, 1959, the program took place in the Ecorse High School auditorium with 650 attending. The program consisted of a pageant of nationality groups to observe Brotherhood Week.

More than 125 adults and young people took active parts in the presentation of the pageant which included folk dances and songs of Romania, Poland, Mexico, Italy, and Czechoslovakia, Negro cultural activities and country music.

Another highlight of the program praised as the most successful ever presented in Ecorse was a panel discussion on brotherhood by local, civic, industrial and church leaders.

The first annual presentation of the Burton E. Loveland Brotherhood Award climaxed the program. King D. Schwayder, general manager of Schwayder Brothers, Inc., an Ecorse firm, was selected by the Ecorse Brotherhood Committee to receive the award. It was presented to Schwayder by Ecorse Councilman Peter Johnson, a member of the committee.

The committee chose Schwayder as the individual who has made the greatest contribution during the past year toward the promotion of brotherhood and better human relations in Ecorse.

Schwayder is an executive board member of the Detroit Roundtable of the National Conference of Christians and Jews. He has been Downriver chairman of the United Foundation’s campaign for two years, and has for several years been active in the Boy Scout movement.

He was cited for instituting an employment policy at Schwayder Brothers based on the premise that an applicant’s character and ability to adequately perform his job are the only standards that determine eligibility for employment with the company. Religion, race, creed, or ancestry are not of importance to determining fitness for either employment or progress with the company.

Among the speakers were Circuit Judge Horace Gilmore who brought greetings from Governor Williams and the Reverend Orion Hopper, editor director of the Institute of Church In Corporate Society of the Presbytery of Detroit. He was formerly a minister at the Ecorse Presbyterian Church.

Governor Williams sent a telegram commending the brotherhood committee and the Ecorse Community Relations Committee for presenting the program.

The colorful pageant of nationality groups with the participants wearing native costumes was an impressive part of the program. Tribute was paid to Miss Helen Garlington, vocal music and drama instructor of Ecorse High School for her outstanding role in directing the pageant. Ecorse Judge Alexander Barbour narrated the program.

Father George Van Antwerp of St. Francis Xavier Church was master of ceremonies. Betty Mayea and Mrs. Carrie Williams were co-chairmen of the program. Mrs. Beryl Manley was in charge of refreshments.