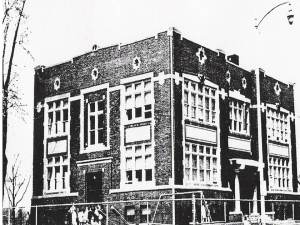 Along with Mr. Herbert Saylor and Alexander Campbell, Ecorse High School Band leaders,   Miss Helen Garlington and Mr. Charles Sweet, music teachers, are probably the most well remembered music teachers and musicians from Ecorse.  I would add one more person who definitely belongs on the list:  Miss Arlyne T. Burr.

I didn’t and don’t think about Miss Burr constantly.  In fact, like most people when someone mentions music in Ecorse schools of old I think of Miss Garlington, Mr. Sweet, Mr. Campbell and Mr. Saylor.  But then, snatches of songs run through my mind and I daily renew my love of music and there is Miss Arlyne T. Burr. During my time at Ecorse School One Miss Arlyne Burr taught me and my classmates music as well as School Two and School Three pupils. I seem to remember that we had music on Monday, Wednesday, and Friday, but I could be wrong about that.  Even if the times were only on Tuesday and Thursday, Miss Burr’s class was magic for me.  She would sit in front of our class seated alphabetically in rows of desks, accompany herself on the piano and teach us music, sometimes from music books, sometimes from song sheets, sometimes acapella.

Decades later, snatches of songs that she taught us still run through my mind.

Mr. Squirrel buries lots of nuts in a tree,

If you care to, if you dare to,

Get your nuts from me.

Every year Miss Burr and her assistants staged a concert and invited the entire community to attend.  An Ecorse Advertiser story on Thursday, May 11, 1950, talked about the Spring Festival at School Three. The pupils of School Three were presenting their annual Spring Festival in the basement auditorium at 2:30 on May 17, 1950.

The program was planned to include vocal numbers by the choruses, selections by the string choir, Irish specialty numbers, a western act based on popular tunes of the day, and a colorful spring promenade featuring a selected group of girls from the school. All pupils from the second through the sixth grades participated. The program was directed by Miss Arlyne Burr, grade school supervisor of music in the Ecorse Schools.

I vividly remember an event from a yearly concert that I participated in as a School One pupil.  Miss Burr taught us a song called Be Kind to Your Parents. The words went in part:

Be kind to your parents,

Though they DON’T deserve it,

A difficult stage of life.

They’re apt to be nervous,

Confused from their daily storm and strife.

Be kind to your parents,

For they DO deserve it…

At the time, being accepting kids, we took the change as a matter of course and most of us remembered to sing the correct words. Now I wonder what prompted Miss Burr to change the words at the last minute. A parent?  Parents?  Political correctness 1950’s style?

The Ecorse Advertiser story continued, discussing the music program in the Ecorse schools.  In the 1950s, Charles Sweet directed the music department of the Ecorse Public Schools and he expanded the program so that more children had the opportunity to develop instrumental or vocal talents. Miss Arlyne Burr and Miss Virginia Tyler supervised vocal music in the grade schools. Herbert Saylor directed the bands and supervised the wind instrument instruction in the Ecorse schools.

Grade school pupils sang in choral groups supervised by Miss Virginia Tyler and Miss Burr and many of them continued their vocal education in the. high school by singing in the Junior High School Choir. Charles Sweet directed the Senior High Choir which gained fame as one of the best choirs in the southeastern part of Michigan or in Miss Garlington’s Glee Club and Songsters which were equally recognized.

One of my favorite memories of Miss Burr involves my lack of self-confidence.  At School One, I was always the shy, quiet child and I didn't have the confidence to speak up in class. I was convinced that I didn't have anything important to say or I didn't have the right answers to the teacher’s questions. One day Miss Burr helped me grow a little self-confidence.  She gave our class an exercise in sight reading by introducing a new song and asking us to hum it back to her.  The song stumped even Lisa( not her real name!), the best musician in the class. I studied each note of the song carefully, my nearsighted nose brushing my desk top. Then, I knew it!  I couldn't believe it myself, but I knew it!  The notes hammered in my head.  Would I have the courage to actually raise my hand and sing the song to Miss Burr?  Would my notes be correct?”

I buried my nose in the music book and wiggled my hand like a timid bird. Miss Burr nodded at me. I opened my mouth and sang:

Hear me said the violin,

With a gentle croon,

I am best of all you know

Miss Burr smiled and I knew she was seeing the real, musical me and not the confidence deficient fellow student that my classmates saw. That day I left School One in a warm glow, Miss Burr’s words of approval rang in my ears and her pleased smile covered me like stainless steel armor against the dents and dings of life for many years after that.

Now I wish I would have been more curious about Miss Burr, at least curious enough to talk to her as an adult as well as enshrining her in childhood memory. I wish I had thanked her while she was still alive instead of tracing the outlines of her life through documentary records.

There are documentary records for Miss Burr.  The Wyandotte, Michigan City Directory of 1950 lists Miss Arlyne T. Burr as living at 211 Burke in River Rouge and records her occupation as a music teacher. Another record, a Michigan Census, shows her living at 29905 Tamarack Drive, Flat Rock, Michigan, in 1993.

The 1920 United State Census sheds some light about Miss Burr’s early life. She was born on May 3, 1914, and in 1920 she lived in Madison Ward 4, Lake, South Dakota with her parents Wallace C. and Theresa D. Burr and her older sister Evelyn W. Burr, age 11.

The Topeka Capital Journal of Topeka, Kansas, printed an obituary for Arlyne Burr, age 87, on Friday, December 21, 2001. She died on Wednesday, December 19, 2001, at Highland Nursing Home in Troy, Kansas.

Her obituary fills in some of the details of Miss Burr’s life that I didn't know. As the census records confirm, she was born on May 3, 1914, in Madison, South Dakota, the daughter of Wallace and Theresa Dahl Burr. After graduating from Central High School in Madison, she earned a bachelor’s degree in education at the University of Minnesota and a master’s degree in music at the University of Michigan. She taught school in Leona, Kansas, from 1938 to 1941, and she moved to Michigan where she taught in Ecorse and Flat Rock for 40 years before she retired. She moved to Troy, Kansas from Flat Rock in 1997.

Miss Burr was a member of the Methodist Church at Flat Rock where she was active in the church choir. She also was involved with the S.E. Michigan Symphony, Poetry Club, Bible Study Club, and the Michigan Retired Teachers organization. She also composed music, especially after she retired.  Miss Burr is buried at Mt. Olive Cemetery in Troy, Kansas.

I’m sitting at my keyboard and playing, “Thank you Miss Burr.”