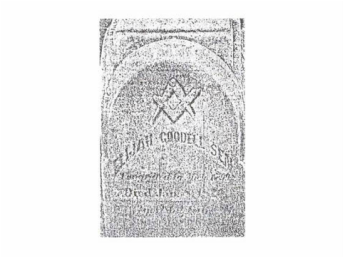 Elijah Goodell fought in the American Revolutionary War on the side of the Americans. Shortly after the Revolution, he and his wife Achsah (Pickert) and their family migrated from the Mohawk Valley in New York to Canada.

Then in the 1790s, the British government passed laws requiring all residents of Canada to swear an oath of allegiance to the crown. Elijah could not swear allegiance to the country that he had fought, so he gathered his family and they traveled to the United States and settled on Grosse Isle. As early as 1797, Elijah farmed and operated a lime kiln on Grosse Isle. The Goodells had twelve children – eight sons and four daughters. All of their children came to Michigan Territory with them except Andrew, the oldest son who remained in the Mohawk Valley where his descendants still live today.

In the early 1800s, Elijah brought his family to the pioneer settlement of Ecorse, because the Federal government had awarded him a land grant for his service in the Revolutionary War. His land lay between the Detroit River and present day Jefferson Avenue, between what is now Salliotte Street and Benson Street in Ecorse.

The Goodell’s log cabin home, one of the largest in Ecorse, served as a social, civic, and religious meeting place. Tradition has it that Reverend Father Gabriel Richard, on his monthly visits to the Downriver area, sang mass in the cabin’s large kitchen. If this story is true, it is even more remarkable because the Goodells themselves were descendents of Huguenots, early French Protestants who fled religious persecution in their native France in the mid-1500s.

When Elijah died in 1820, he was buried in a small family graveyard on his property by the Detroit River. Eventually, his gravestone was moved to Alexander Court between Benson and Goodell, near the spot where he had built his first log cabin home.

Despite its great age, the letters on Elijah Goodell’s gravestone records his death in 1820, and that of his son, Sergeant John Goodell who was killed in Amherstburg, Ontario, during the War of 1812. For many years, motorists traveling busy Jefferson Avenue passed his gravestone nestled against an ivy covered fence without knowing it was there. Most Ecorse residents didn’t know it was there.