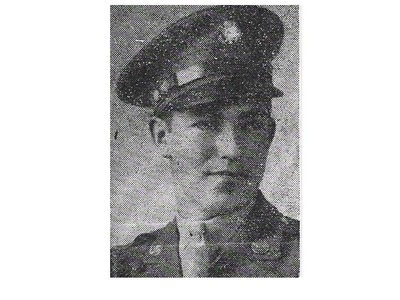 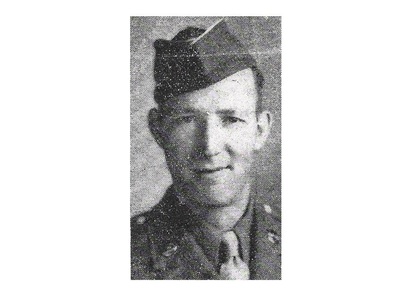 In July 1949, Reverend Leonard Duckett, pastor of the Ecorse Presbyterian Church, officiated at the reburial in Michigan Memorial Cemetery of Pfc. William McMurdo, the son of Mr. and Mrs. George McMurdo of Ecore. “Fergus,” as his friends and family called him, was killed in action on November 15, 1944 at Graylotte, France, after just fourteen months of service.

He was posthumously awarded the Bronze Star. According to the citation issued by the War Department, McMurdo voluntarily made three trips through barbed wire entanglements to get grenades for his comrades who were trapped in advance trenches outside fortifications in the face of enemy fire. Later that day he was killed by enemy fire as he attempted to set up a machine gun.

William N. Nagy, the sons of Mr. and Mrs. Lewis Nagy of Seventh Street in Ecorse, volunteered to join the Air Crops on December 8, 1941, the day after Pearl Harbor. Just 22 years old when he joined the Air Corps, he served as a flight engineer on one of the battered C-46 transport aircraft that were used to maintain the threadlike supply line from India’s Assam Valley to the Allied fighting forces in China.

Nagy, who had earned the rank of technical sergeant, died when his plane crashed into the side of a mountain on April 4, 1944, just three months after he arrived in India. When he was still stateside, he married his wife Alice, and his son Michael was 17 months old when he died.

In January 1949, Nagy was reburied at the Michigan memorial Cemetery with full military honors.

Word came from the South Pacific that Corporal George Pappas of Ecorse had been awarded the Silver Star Medal. George was the son of Mr. and Mrs. Sam Pappas of 4678 West Jefferson Avenue. He enlisted in the Marines on January 26, 1942, and after two months training on Paris Island was on his way to the South Pacific where he saw continuous action.

Pappas’ captain and another corporal were awarded the medals at the same time. Following a parade, they were escorted before the commanding general who pinned the medals on them and shook their hands.

The Silver Star medal was inscribed with his name and reads “Corporal George Pappas for Gallantry in Action.”

George had two brothers also in the service. Nick Pappas was a radio technician in the Marine Air Corps and had been in the South Pacific since February and Gus Pappas was a seaman second class in the Navy.

All three brothers were well known in Ecorse. They attended school in Ecorse and all were team members of the Ecorse Boat Club where they distinguished themselves with the championship crews.

Charles H.  Sarazin, Jr. of Ecorse joined the Navy in 1929 and served for four years as shopkeeper at the Brodhead Armory.

In 1941, he reenlisted in the Army and during World War II was awarded 16 citations for heroism. He served with the third division in French Morocco and Tunisia. He landed in Sicily and saw action in Palermo, Naples, Casino and the Anzio beachhead. He continued with the march through Europe and saw action in Strasbourg and Alsace Lorraine and Frankfort. When the war ended he was in Salzburg, Austria.

He was awarded the Silver Star, the second highest medal which can be awarded; three Bronze Medals, three Purple Hearts, three Oak Leaf Clusters and the Good Conduct Medal. He was also awarded the French Croix de Guerre, a French decoration for the Army of Occupation. He also won service ribbons for the African and European campaigns.

Charles was a member of the Roy B. Salliotte American Legion Post and the Veterans of Foreign Wars, Ecorse.

He died in December 1977 and is buried in Woodmere Cemetery, Detroit.

Widely known in the Downriver area as “Zuke,” Albert Zukonik was born in Pennsylvania on May 15, 1919, but came to Ecorse as a teenager in 1933 and spent the rest of his life there.  He graduated from Ecorse High School in 1936. At Ecorse High he was a football and baseball star and after high school he played sandlot ball in Ecorse and traveled with a semi-pro baseball team in Washington, D.C.

Before joining the Marine in 1939, Zuke worked at Great Lakes Steel. In the Marines he was a platoon sergeant and a provost marshal’s guard in Quantico, Virginia. He also played baseball on a Marine team.

He served two years and four months in the Pacific as a seagoing marine. During his six years in the Marines, Zukonik became light heavyweight boxing champion of the Canal Zone forces.

While serving aboard the cruiser Erie, he swam two miles through shark-infested waters when it sank in the West Indies in 1942. He later was head drill instructor for Navy aviation cadets at the University of Georgia.

Zuke joined the Ecorse police department in April 1947 and was promoted to sergeant in charge of the traffic department in 1954. A crack pistol shot, his colleagues described him as a “rugged, deep-voiced prototype of a Marine platoon sergeant,” which he was during his more than six years in the Marine Corps.

Advancing to police chief in 1959, Zuke also served as Ecorse license examiner, weights and measures inspector and vice squad investigator. In 1969 he was elected to the city council and in 1971 he ran for mayor, defeating incumbent mayor Richard Manning.

On September 9, 1973, Zukonik died while resting between bowling frame at Fort Park Recreation in Lincoln Park where he bowled in a morning league. Ecorse City Council approved a resolution of respect for Mayor Zukonik and ordered that all flags on public buildings be flown at half mast for 30 days to express their respect for him.

Miss Helen Garlington graduated from the University of Michigan with a Master’s Degree in 1948, majoring in dramatics and musical education. During World War II, she spent much time with the armed forces in North Africa arranging and producing plays and skits for the soldiers and sailors.