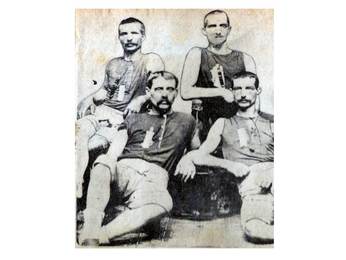 The Montie Brothers helped found the Ecorse Rowing Club.
The Royal Henley was introduced to Canada from England and took its name from the Royal Henley Regatta in England  It was held in Toronto in 1880, after the governing Canadian Association of Amateur Oarsmen was created and during the following years was held at various times in Hamilton, Lachine, Ottawa, Toronto, Barrie and Brockville.

By 1903, the Canadian Association of Amateur Oarsmen was searching for a permanent home for the Henley. The Association listed its requirements as a straight mile and one-half stretch of water, protected to ensure rowing on the windiest days, a course making it possible for each competing crew to win, and a course convenient to spectators. They found exactly what they were looking for at the St. Catharines Course on the original Welland Canal. The Royal Canadian Henley has been held at St. Catharines since 1903 with the exception of a break during the First World War.

After beating the Hillsdales, the Montie brothers from Ecorse, Michigan, toured the country, rowing 33 races and winning 31 of them. One defeat happened when John’s foot brace broke and the other came about when the choppy water on the Hudson River broke their shell in half. Their shell demolished, they quit the race but recovered the parts and mended the shell well enough for their children to use it.

George Clark built the first boat for the Ecorse Club and the Club used it in practically all of the races that it entered. In 1893, the Ecorse crew consisted of Frank Salliotte; Elmer Labadie; Charles Tank and Theodore Beaubien. This crew remained intact through the 1894 season, but in 1895 Charles Tank was the only member of the crew left to welcome Bill Clement, George Clark and Alex Beaubien.

In 1896, another Ecorse crew composed of Alex and Alfred Beaubien, Charles Tank, Charles Sesyer and Louis Champagne set a world’s record for the one and a half mile race around one buoy. In 1897 the crew was made up of Charles Tank, Louis Champaign, Alfred and Alex Beaubien, and in 1898 Bill McGullin and Henry Lange joined the crew.

Just before the turn of the century rowing regattas were popular and the Wah-Wah-Tah-See Club entered every race it could. During these years the Ecorse men consistently won in the Northwestern on the Detroit River, Bay City, Orchard Lake, Lake St. Clair and at Monroe. Alvia Grant was among the famous Ecorse oarsmen just before the turn of the century. He was born in Ecorse on March 31, 1879 on the old Grant farm on Jefferson Avenue and lived there in a home listed as 3851 Jefferson Avenue all of his life. Besides rowing, Grant took an active part in the Macabees and worked as warehouse superintendent at the Worcester Salt Company.  When he died on July 9, 1942 he was buried in St. Francis Cemetery.

In 1901 at Orchard Lake, the Wah-Wah-Tah-Sees won easily with an entirely new crew consisting of Fred Vellmure, Frank Grant and I. Salliotte pulling oars in this race. Fred Vellmure was also the sculler for the Ecorse Boat Club. During these years Ecorse defeated the Detroit Boat Club, Excelsior, Zypher and Centennial, all of Detroit. In a wider circle of victory they conquered Bay City, Port Huron, Battle Creek, Monroe, Chicago, Wyandotte, Saginaw and Windsor, Ontario.