Going to School in Ecorse
by Glenn Hunt 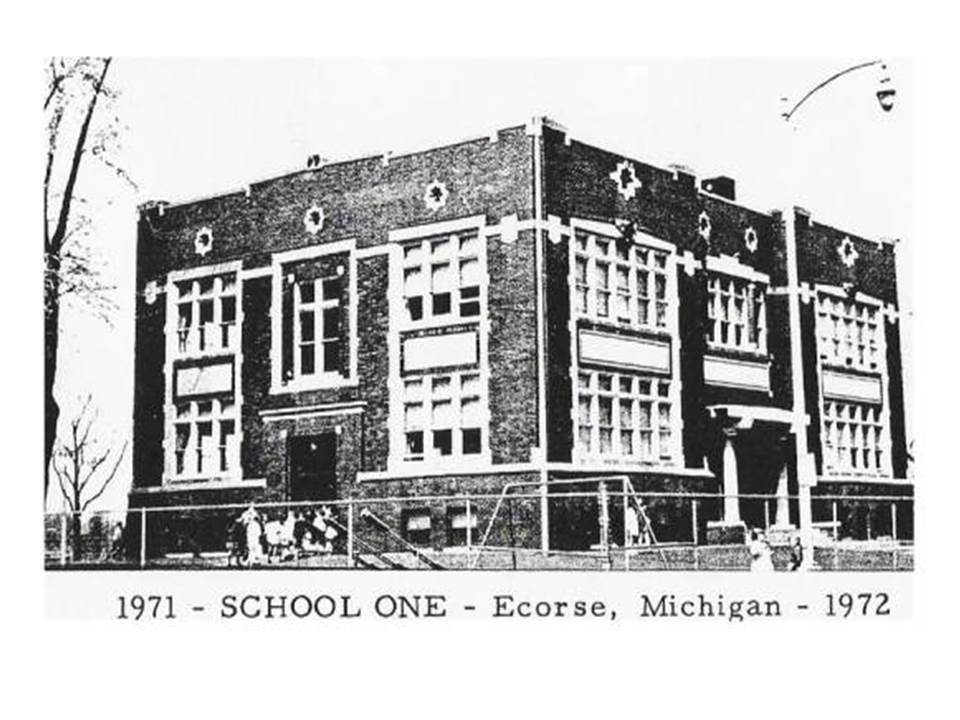 Glenn Hunt, former teacher at Ecorse High School, researched and compiled many of the facts about early education in Ecorse. He said that some of the oldest Ecorse citizens recalled their parents mentioning a log school located near the shore line of the Detroit River at the foot of what is now Labadie Street, where French instead of English was the language of learning. A few other old citizens recalled a small frame building that stood at the corner of West Jefferson and White Street which served as a school in the 1860s.

In 1871 a small frame building was put up on Labadie near High Street and a few years later it was moved across the street and located on the property where School One stood. The original School One was torn down in 1911 and replaced by an eight room brick structure on which it was possible to read the inscription “Ecorse High School,” over the entrance when it was School One elementary school. The new school building was completed in 1912 and during the months it was being built, school was conducted in the band hall on White Street and in the council chambers of the original city hall that was just across the street on Labadie.

In 1916, ground was broken for a new school on Josephine Street, which was called School Two. Another addition to School Two was completed in 1921. School Three, located on Sixth Street near Southfield, was completed in the spring of 1923.

The school population in Ecorse was increasing and by 1938 it was necessary to build a new school. Work began on a modern building on 12th Street. Claude J. Miller had died before the school opened and at the dedication, the new school was given the name of the Claude J. Miller School as a fitting tribute to a man who had devoted many years of his life to the development of the Ecorse School system and community.

The Ecorse schools have known many fine principals and superintendents. Fred Cody, brother of Frank Cody,m who later taught in Detroit; Edward Fox who left school teaching to enter real estate; and William Harris who played a large part in organizing the first football team in Ecorse were just a few. Newman Smith was principal of the Ecorse Schools in 1912 when the second School One was being built. Louis Hawkins followed him, but resigned after a few years to practice law. Frank O’Boyle, later a Detroit attorney, was principal of School One in 1914.

In 1915, Claude J. Miller became principal of School One. During his years of service from 1915 to 1939, mr. Miller saw the Ecorse School system grow from a ten grade to a twelve grade system and from one small building to five. In 1917, Mr. Miller assumed the duties of superintendent of Ecorse Schools and Miss Helen McTaggert, a teacher in the system, was appointed principal of the high school. In 1923, Miss McTaggert resigned and John Davis became principal of the high school, a post that he held for 25 years.

In the fall of 1939, Arthur J. Erickson, formerly principal of the Michigan State Normal High School and superintendent of the Ypsilanti Public Schools, was chosen as the new superintendent of the Ecorse schools. Superintendent Erickson contributed much to the development of the curriculum as well as to the building up of the athletic plants, and under his supervision, plans were made to build another school to meet the needs of the rapidly increasing population.

Much of the success of the Ecorse school system can be attributed to the tireless efforts of a fine staff of principals, many of whom served for over a decade. These include John David whose leadership extended over a quarter of a century and he gave Ecorse one of the finest high schools in the state.

The Board of Education in the late 1940s was largely responsible for the increased opportunities that the young people of Ecorse enjoyed during the 1950s. members of this board were Fred Vellmure, superintendent of a Detroit chemical plant, who served as president of the board for 33 years; Roy Seavitt, principal of the Morely School in Detroit; Guy Pooley, president of the Ecorse-Lincoln Park Banks; Charles Dilfill, superintendent of the Detroit, Toledo and Ironton Railroad; and Ray Montie, manager of the Ecorse Ice and Coal Company.

By the 1970s, Ecorse school served over 4,800 pupils annually and was staffed by 210 teachers, the majority of whom had master’s degrees. By the 1990s, the Ecorse school buildings that had sheltered generations of Ecorse children while they learned – Schools One, Two, and Three and the Miller School and Ecorse High School – were showing their age. The Board of Education and the City of Ecorse implemented a plan to build new schools in Ecorse. Schools One and Two were torn down and School Three was replaced with Grandport Elementary School. The old high school was also torn down and the new Ecorse Community High School was dedicated in 2001. John F. Kennedy School was also built to be used as a middle school.

From the time the early Ecorse schools were conducted in French to the days of Miss Elliott, the terror of room 212 at the old Ecorse High School,  Ecorse has provided a good education for its sons and daughters. The new Ecorse schools carry on the tradition.