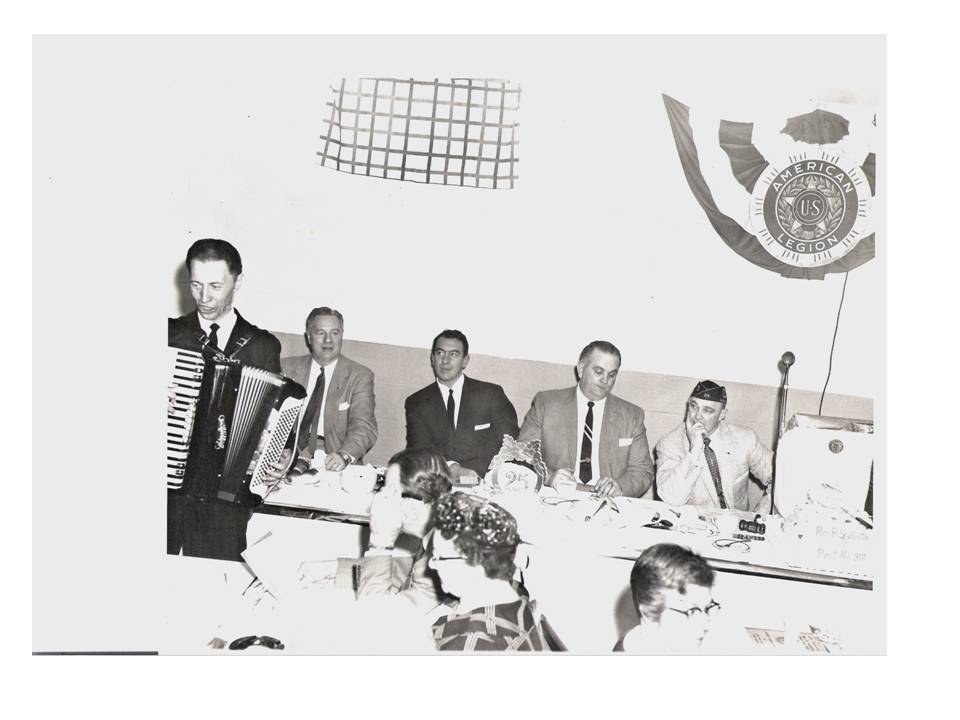 The Great Lakes Steel American Legion Auxiliary will hold a business meeting on Thursday, February 2, 1950 in the Memorial Home on Elton and West Jefferson in Ecorse at 8 p.m. Mrs. Blanche Dickey will president at the meeting due to the illness of the president Mrs. Jerry Fredette who is a patient in Wyandotte Hospital.

The unit will entertain at the Veteran’s Hospital on Wednesday with a birthday treat and prizes for the veterans.

Members of the Post and Auxiliary are planning to attend the 18th District Americanism Banquet on February 11 in the Lincoln Park Memorial Home.

The Post is planning a Mardi Gras in the Memorial Home at Elton and W. Jefferson from February 24 to 26. The Auxiliary plans to have fancy work and bake sale booths.

Dinner and Dance followed by Dedication of Colors

Great Lakes Steel American Legion Post #272 and Auxiliary on Saturday, May 9, celebrated the 19th anniversary of the founding of the Post with a dinner and dance at the Post home on West jefferson. The well attended affair got underway at 6 p.m. with the serving of a chicken dinner.

Following the dinner an impressive ceremony was held during which the new Post colors and American flag donated by the Auxiliary to the Post were dedicated. The presentation of the flags was made by the Auxiliary president Edith Monroe and the acceptance was given by Past Commander Alex Lovinski. Post Commander Albert Wieging led the service.

Among the distinguished guests present for the big affair were Department Commander Eugene Houch and wife; District Commander Francis Hogan and wife; Field Service Officer Russell Cameron and wife; and District Auxiliary President mrs. Mildred Wieging. Each of the past post commanders present were recognized and honored.

Ecorse and River Rouge will pause for a special tribute and memorial to all veterans.

Although traditional Memorial Day is May 30 and the new observation day is May 31, ceremonies will begin at 9 a.m., May 23, in each city.

The Ecorse parade will begin with assembly at 12:30 p.m. and stepping off time 1 p.m. at the intersection of Tecumseh and West Jefferson Roads, Ecorse. All parade units are asked to continue the line of march for one full block past the reviewing stand before breaking out of the line.

Entertainment at the reviewing stand, before the parade begins, will be presented by a troupe from the Richardeau Studio, Wyandotte.

Speaker at the reviewing stand will be Mrs. Albert Wieging, American Legion Auxiliary president who will give the Memorial Day address.

The program at the Riverside Park reviewing stand following the parade will begin with the playing of the “Star Spangled Banner” by members of the Ecorse High School Band. The Rev. William Rodgers, pastor of the West Side Baptist church, Ecorse, will present the invocation and the address of welcome will be given by Richard E. Manning, Mayor of Ecorse.

Giles Reeve will introduce Grand Marshal Aide, Gilbert Michel and he in turn, will introduce the grand marshal, John Charboneau. Eleanor Chase will present the float award trophy; Ida Ruetz will give the Peter Reeves address and Giles Reeves will make the floral presentations.

Youth groups taking part in the parade, May 23, will receive by mail a certificate of appreciation with compliments of Ecorse Memorial Day Parade Committee, Mrs. Dorothy Ody stated. Certificates will be sent to the schools or leaders of the groups.

Sons of the American Legion of Great Lakes Steel Post #272

Girl Guards of the Salvation Army of Ecorse