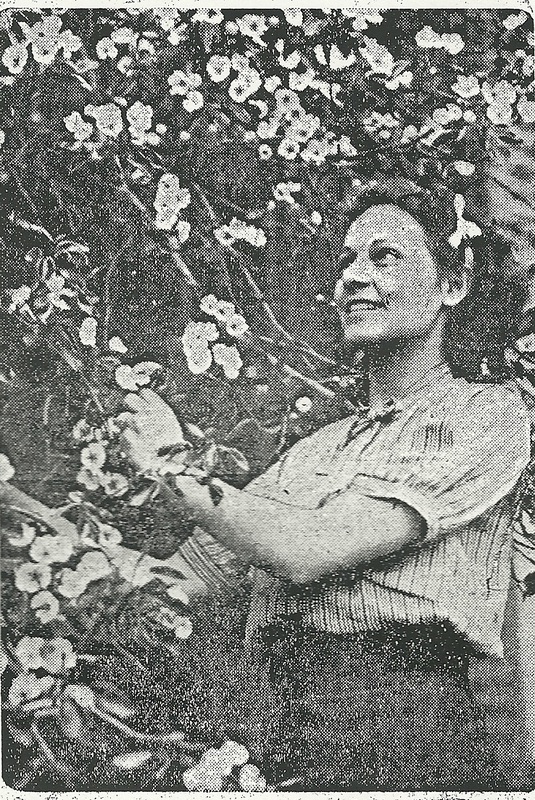 On May 13, 1935, Miss Estelle Landers, 1157 Fifth Street, Wyandotte, found the ancient French pear tree still blooming after two centuries of fruitfulness, in the yard of William Goodell at 4265 West Jefferson Avenue in Ecorse.

The Pear Tree and the Goodell Homestead

The French pear tree that bloomed in front of the William Goodell house at 4265 West Jefferson and the various Goodell houses in Ecorse combine to make an intriguing puzzle that hopefully some Goodell family member can solve for the benefit of Ecorse history. A story in the Ecorse Advertiser stated the original Goodell homestead extended from Benson Street to Salliotte on both sides of Jefferson Avenue. Another Ecorse Advertiser story said that the old Elijah Goodell homestead still sits on Alexander Court close to the Detroit River and although it has been added onto and sided through the years, the original logs are still underneath its modern exterior.

A modern Google map shows that 4265 West Jefferson, now a tire store, is located between Bonanzo and Alexander Court well within the boundaries of the old Goodell homestead.  It is almost directly across Jefferson Avenue from  the corner of West Goodell Street and Jefferson Avenue where Miss Blanche Goodell’s home stood for many years. The City of Ecorse tore down Miss Goodell’s home in the 1970s.

The French Pear Tree Up Close and Personal

The French pear tree in William Goodell’s yard in  Ecorse blossomed in early May and produced many symbolic and real bouquets of waxen flowers. The French pear tree grew to a height of approximately sixty feet and its trunk measured about three feet thick. Many people mistakenly identified the French pear tree as an oak tree because it so resembled hardwood.

The French pear tree yielded plenty of small, sugar, russet pears for harvest in the fall. In its best years produced fifty to sixty bushels of pears that had a distinctive flavor, tasting tart and yet sweet with a mellow and firm pulp.

The French pear tree had a distinctive bearing record. It rotated in three year cycles, each year producing more fruit than the least year. In the third year, the yield began to decrease and continued to do so for three years and then started increasing again. Frost did not seem to affect the French pear tree.

In 1935,  the Ecorse pear tree on William Goodell’s  property was one of just six in the Downriver area. One grew in Waterworks Park in Detroit, two in Lenawee County, and two across the Detroit River in Canada.

The French Pear Tree's Debated Past

The historical and botanical records differ on how the pear tree came to the Downriver area.  Some records indicate that over two hundred years ago when French explorers voyaged through Southern Michigan seeking beaver and other furs and exploring rivers and lakes, they also discovered pear trees. Some historians argue that the Goodell pear tree is a native of Michigan and that the Indians cultivated it for generations. They introduced the old pear trees to their new French friends.

The argument for the French pear tree being a Michigan native is buttressed by the fact that the French pioneers recorded in old deeds, grants, and similar documentary evidence have died of old age. Did the old orchards that the pioneers planted eventually die out too, leaving only the French pears as survivors of that early time?

Other historians believe that the early French settlers brought the French pear trees to America with them because they resemble a similar kind of pear tree found only in France. Pears, like the Goodell family, have an extensive and cosmopolitan history.  Pears grown in English medieval gardens had French names , suggesting that their origins were probably French, while other kinds of pears were developed and cultivated in England. One of the favorite varieties of the old pears was grown in France and named for Saint Rule or Regul, the bishop of Senis in northern France.

It doesn’t take a leap of logic to picture the English branch of the Goodell family planting French pear trees in their orchards  and carefully tending them into long and productive lives. It is equally logical to picture the early French settlers carrying carefully bundled pear trees when they moved to their new homes in Downriver.

An Ecorse Advertiser story in 1935, about the widening of Jefferson Avenue continues the story of the Goodell French pear tree. The Advertiser story assured residents of Ecorse village that the stalwart old pear tree at the William Goodell home at 4265 West Jefferson would be spared in the forthcoming street widening .  Many people  were relieved to hear the good news about the Goodell pear tree that was older than the village of Ecorse.

At first officials thought that the grand old tree, believed to be well over 200 years old, would have to be cut down when the actual widening of Jefferson got underway.  Then they discovered that the tree came just barely inside the curb line, saving it from being cut down.

Rather than see the old pear tree lose its struggle for existence the Goodells planned to go to the extra expense of tearing down part of their house and moving it around the tree when they move the house back, when they bought their home back from the County, as they expected to do.

The survival of the old French Goodell pear tree for over two centuries was a vital connection to the days in Ecorse history when it stood by the Detroit River that flowed over the paddles of Indian canoes.  Today the Detroit River flows past industry, urban development and change, but it survives just as the Goodell French pear tree and the City of Ecorse has survived.