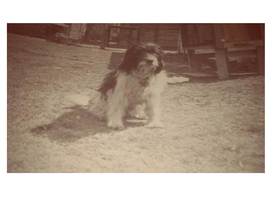 ​Andy’s Ecorse Adventures –The Saga of A Hometown Dog!

When Andy came into my life he was a puppy of about eight to ten weeks old. Andy looked like “Andy Panda” during this stage of his life when he decided to live with us. He was a small, stocky puppy who appeared to be a mix of English sheepdog and English Spaniel. I don’t know if he met my sisters Mary Jean, Carol, or myself first. We were out playing when he followed us home. My parents said that we could keep Andy until we found his owners. We soon discovered that he belonged to the Cavanaugh family that lived about a quarter mile away.

Although the Cavanaugh’s were not bad people and Andy wasn’t abused, he had no use for his original owners. Andy had his own needs and even as a puppy he knew what they were. Andy needed kids. The Cavanaugh family did not have young kids, so Andy left home. With tears in our eyes, we returned Andy, but we had no sooner taken him back then he returned to our house. This “take him back and he’ll return” took place for about two weeks. Finally, Mr. Cavanaugh said, “Keep the damned dog. He is of no use to my family.”  We had our dog.

By the time I started School Three, Andy had settled into a routine that would become his trademark. In the morning he would walk us to Sixth Street and Southfield Road,  a busy intersection, and turn us over to “Peck Le Blanc,” the crossing guard. Peck would see us across the street and we went to school. Andy returned home to spend his mornings with my mother. At noon he came back to Sixth Street and Southfield Road, saw us home for lunch and later returned us to Peck Le Blanc for afternoon classes. Upon his return home in the afternoon, he greeted the postman and went on the carrier’s route. At about 3:00 p.m., he met the Oldfield children and supervised our return home. This pattern continued until I left grade school. After that, Andy continued to do the mail route.


Andy Goes to the Beach

After World War II, automobiles were hard to come by. My father managed to find a 1940 Chevrolet that had been in an accident and sorta repaired. The sorta was that it was put back on the road without a firewall. What is a firewall? It is what keeps the engine heat from entering the passenger compartment. It  was fine in the winter but not in the summer. Michigan’s heat is similar to the way I have heard that Houston’s heat is. We have humidity that rivals a jungle.

My parents, Andy’s legal owners, were never wealthy but saved all year so we could spend a week at the beach. In this case it was Erie Beach in Ontario, Canada. Erie Beach was about a ninety-mile drive from our home. It was hot and humid. At this point I don’t think Andy knew he was a dog. He was just one of the kids. As such, he fought for one of the windows in the back. Neither he nor we kids wanted to sit u p in the front with my parents due to the lack of a firewall.

Andy rode with his long hair and tongue flying in the breeze. He was in heaven. What could go wrong? Andy started to shed. My father was a gentleman and wore a shirt and tie along with a business hat with his coat draped over the front seat. My father was as neat as a pin and equally clean, until the trip to Erie Beach. The further we drove, the harder Andy shed. I can still see my dad pulling and wiping the hair from his face and mouth.

By the time we arrived we were a sight to behold. Where did we arrive? We were at a small cottage with an outhouse for sanitary purposes. To add to our delight, there were spiders in the outhouse. I think this is when I gained complete control over my bodily functions. I didn’t want to visit this place infested with spiders.

Andy loved the beach. He had water to swim in and birds to chase. Chasing birds got Andy in trouble. Lake Erie is shallow and when there is a storm, it kicks up in a hurry into five to eight foot waves. The land in Erie Beach is flat and the storm surges almost reached the cottage and outhouse. The next day things were back to normal except for the waves.

Throwing caution to the wind, Andy took off after a gull. He flew into the water and was greeted by a monster wave. It picked him up and threw him onto the sand. After this, he hated birds and refused to go in the water. We would pick him up, place him in the water, and he would swim for shore. Andy wanted nothing more to do with water after his adventure with the gulls of Erie Beach.

Besides birds, another one of Andy’s biggest failings was that he did not like to be put on a leash or tied up in the yard. Andy was a free spirit and he liked to savor the sights of Ecorse.

One day during his travels he was apprehended by the dogcatcher, Peck Le Blanc. Yes, this is the same man who acted as the School Three Crossing guard. Andy was placed in the back of the “dog catcher truck” and transported down the alley to the back of our house for punishment and incarceration.

Andy was placed on a tether – a clothesline – in the backyard to serve his sentence. Andy was one unhappy puppy. He barked and cried like a baby. The warden, my mother, couldn’t take the whimpering, crying and barking. Andy was pardoned and vowed to be a homebody.

The next time Peck Le Blanc caught Andy, he took Andy to the police station to face justice. The law in this case was my father, then Sergeant Oldfield. The criminal was transferred to the back seat of a police car and driven home.

I don’t think his good behavior lasted a day and he was back to his old ways. To Andy’s credit, Peck Le Blanc never caught him again.

It was in his second year that Andy discovered girls. Good girls, bad girls, short girls, tall girls, he didn’t care. I don’t know which girl it was or what breed she was, but once Andy tasted love, he was hooked. He would go on honeymoons that would last two weeks at a time and then come home dirty, tired and limping.

First we yelled at him, then showered him with affection and then showered him again with water. After his family welcome home, he had to do hard time on the clothesline. Here he would repeat his whimpering, crying and barking until my mother took him off the line.

On one of his trips that we children called GIRLING, he was gone for a long period. One day other children informed us that Andy had been hit by a car. The three of us, my sisters and me, ran to the corner to see if it was true. There lay a tattered, dirty dog and he wasn’t breathing. It appeared that our worst fears were true. The dog catcher took the body away and left us mourning.

About a week later the real Andy came home, dirty, tired, and limping. It must have been one of his siblings that met the grim reaper. To this day I have never forgotten the trauma of our dead dog.

What happened to Andy and how long was his sentence?

We put him on his tether on the clothesline in the backyard to serve his sentence. Her served with whimpering, crying and barking. My mother commuted his sentence after an hour or so. Some things never changed in the Oldfield household!


In my youth you had to earn money, as very few in Ecorse were wealthy enough to give their children large allowances. I started peddling papers at about ten years old. My first paper route was The Ecorse Advertiser, followed by the Mellus Newspapers, Detroit News, Detroit Times, back to the Detroit News, and then to the Detroit Free Press.

My sixth paper route was the morning Detroit Free Press.  My route ran from Sixth Street to the Ecorse River (Creek). If you remember, creek in Ecorse was pronounced “crick.” Andy was my constant companion on this paper route. I would finish the route in the three trailer parks on the Creek. For the life of me, I can only remember the names of June’s and Potter’s Trailer Parks. The third trailer park behind Potter’s escapes me.

I would first deliver to the trailers in June’s and then cross Southfield Road to Potter’s. When I completed my deliveries at Potters, I would hop the fence and do the third trailer park. Andy would go to the end of the fence, enter the third trailer park and catch up with me. This went on for months, and one day Andy showed me this new trick. He had learned to climb a cyclone fence. After this, I was never out of his sight.

We would finish my route and head for a small coffee shop located between Seventh and Eighth Streets. I would sit down, get a jelly stick and enjoy a coffee. When I came out Andy got his reward. He was also fond of donuts.

It sounds like Andy reformed, doesn’t it? Well, he hadn’t. Andy turned his new found trick to no good. Many people kept their dogs in kennels and they became prey to Andy. He would climb the fences of these kennels and have his way with the females. If he was unfortunate enough to enter a male dog’s kennel, Andy would brush the dog aside and eat its food. Then he would climb out and go about his business.

At this point Andy was “The Man.” As the canine pregnancies increased and reports of a rogue dog stealing dog food increased, the law was informed. A description of the womanizing dog food thief reached the Ecorse Police Department. It didn’t take my dad long to figure out that he, a policeman, was harboring a fugitive. I recall that Andy received his usual punishment. He was tied to the clothesline, but we all know how long this lasted.

I honestly don’t remember Andy stopping his womanizing and thievery until he got to be too old to climb cyclone fences!