Dr. Hileman and Duke Underill Served in World War I 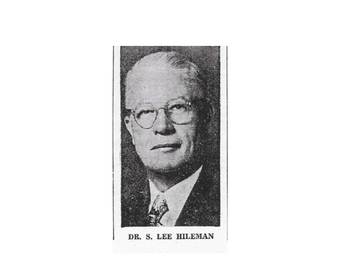 Dr. S. Lee Hileman Served with the Army in France During World War I

Dr. S. Lee Hileman’s friends and family knew that he was an experienced pilot with more than 1,500 hours to his credit in nearly 10 years of flying, so they didn’t worry when he and three of his associates from his cattle farm near Alma planned to fly from the cattle farm to an island near the Canadian shore of Lake Huron to buy horses for their farms in October 1958.

But the weather changed from sunny to wind, rain, and fog, and the plane crashed behind a farmhouse in an open field about a mile north of Otsego County Airport three miles northwest of Gaylord.

Witnesses said the plane, flying low “made a turn and then crashed to the ground.” State troopers reported that the plane buzzed the field once as if trying to make a landing, and then crashed, killing Dr. Hileman. It did not catch fire.

C.A. Koester, 33, manager of the Hileman cattle farm, Ray Montague, 33, a Gratiot County cattle broker, and Rolla Donnan, 57, of Breckenridge, owner of a farm near the Hileman property survived and were taken to Gaylord Hospital.

Officials in Gaylord notified Lincoln Park Police of the crash and they in turn, went to the Hileman home on New York Street and told his daughter Janice, 22, and his son, 28 of the tragedy. When Mrs. Nina Hileman and her other daughter, Mrs. Marilyn Nueder, 28, of Taylor Center, returned from shopping in Detroit, they too learned about the accident.

An avid hunter, fisherman and outdoorsman, Dr. Hileman flew his plane to hunting and fishing spots in Kansas, Wyoming, Florida, and northern Canada. He also hunted in Alaska. His wife, Nina, accompanied her husband on many of his trips and on the Saturday before his fatal crash, she and two grandsons had flown with him to the farm. “He was considered a wonderful pilot and navigator and kept his plane in excellent condition,” she said. “I always felt safe when he was piloting the plane and I know others did too, because he was always so careful.”

Born July 29, 1899, in Ohio City, Ohio, Dr. Hileman completed his premedical studies at Alma College where he met his wife, Nina. During World War I, he served with the Army in France for 22 months.

After Dr. Hileman graduated from the former Wayne College of medicine (now Wayne State University College of medicine) he began his medical practice in Ecorse in 1928. In 1939, he moved to Lincoln Park but continued to practice from his office at 4045 West Jefferson.

At the time he died, Dr. Hileman was chief of staff at Delray General Hospital, and chairman of the record boards of Outer Drive Hospital and Wyandotte General Hospital.

He was a member of the Great Lakes Steel Post 272 of the American Legion.

Ellis “Duke” Underill loved life and its many activities, but above all he loved Ecorse. When he died on Sunday, July 15, 1973, at age 81, his family honored his last request and buried him in tiny Ecorse Cemetery, owned by St. Francis Xavier Church.

Duke founded Underill Associates in the early 1920s, was a former official of the village and township of Ecorse and through the years served as the official Goodwill Ambassador of Ecorse, an honor conferred by the mayor and city council.

Active in many organizations, he was a charter member and past president of the Ecorse Kiwanis Club, member of the Grosse Ile Golf and Country Club, Ecorse Rowing Club, American Legion, Marine Corps League, Zion Lodge One, F. and A.A. Detroit Consistory Mosel Temple, Downriver Shrine Club. As a charter member of the Ecorse Kiwanis Club, Duke was one of its organizers in 1927.

For more than two decades he was known for his hunting and fishing explorations and appeared on the George Perriot and Mort Neff television shows to describe his world travels.

He was often described as the most avid fisherman in Ecorse, who would travel to the ends of the world to fish for fighting trout. He and fifteen fellow fishermen went to the Bear Lakes area of the Arctic Circle in Canada’s Northwest Territories in 1963 to hunt and fish and he and Mort Neff went fishing in Chile. Trophies from his hunting and fishing expeditions decorate the walls of Underill Associates.

Duke was born in Syracuse, new York on July 10, 1892, and came to Ecorse as a boy. He served with the Marine Corps during World War I. At war’s end, he returned to Ecorse and worked in the real estate and insurance fields. Around 1920, he founded Underill Associates and operated it until his retirement in 1968. From that office over the years, Duke and his associates handled the insurance needs of banks, corporations, municipalities, and school districts. When he retired, he sold his business to his brother-in-law and long time associate Frank Butler, but continued to visit the office.

Mayor William W. Voisine first gave Duke the title of Goodwill Ambassador for the city of Ecorse and he held that title until he died. Many times as he appeared on television to talk about his hunting and fishing experiences, he would also boast about Ecorse, calling it “the greatest little city in the world.”

Before he died Duke requested that he be buried in Ecorse Cemetery. His family granted his request. His tombstone reads:  “Gone Fishing.” 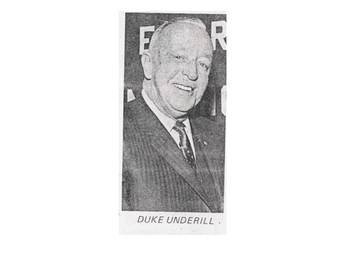