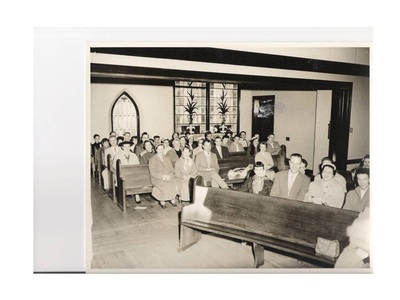 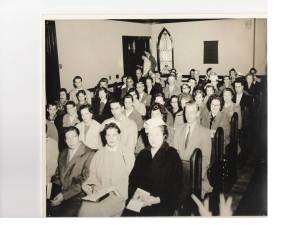 Sunday School in Ecorse dates back to 1879 and the official Ecorse United Presbyterian Church grew out of a mission Sunday School that was organized on September 1, 1907, by a group of young people who lived in the small Downriver village of Ecorse, but belonged to the Wyandotte Baptist Church.

On September 12, 1910, the Presbytery of Detroit organized the church, recording 51 charter members and welcoming Reverend Roy G. Hershey as its first pastor on December 15, 1910. A windstorm destroyed the old frame church building in 1912 and members built a brick church  building on the corner of Jefferson and Bonanzo which served the church for more than sixty years. The red brick church was demolished and a new church building was raised and dedicated in February 1970.

In 1931, Reverend Leonard Duckett and his family cane to Ecorse and for 25 years he brought a steady, strong Christian influence into the life of the community. After he retired, three young ministers, all recent graduates of Princeton Theological Seminary, brought a group ministry to the church.

With the support of the Presbyterian Board of Church Extension of Detroit, these ministers extended a two year vocational ministry into the large industrial plants of Ecorse. Reverend George Coleman, one of these three ministers, remained to pastor the church until 1962. During this era, the church reached its peak membership of over 400 members.

Reverend Raymond Scott served as church pastor from 1961 until 1971. During these  years the congregation met the challenge of replacing the old church building. Reverend John Bartko became pastor in 1972 and served faithfully until he died suddenly in 1993. During his pastorate, the surrounding community experienced steady unemployment, urban flight, declining property values, and erosion of the public school system and youth recreational opportunities. Ecorse went into receivership from 1986-1990 and the struggle for the renewal of Ecorse still continues.

In the late 1990s and early 2000s, the Ecorse Presbyterian Church focused on being a "family church" with little emphasis on active outreach. As the community changed and as members of the church family moved on or died, the congregation steadily declined around 200 members, hovering there for several years. Sunday School enrollment suffered similar losses. Pledges and contributions also declined, eventually forcing the church to tap into its endowment and investment reserves.