Ecorse Rowing Club in the Beginning 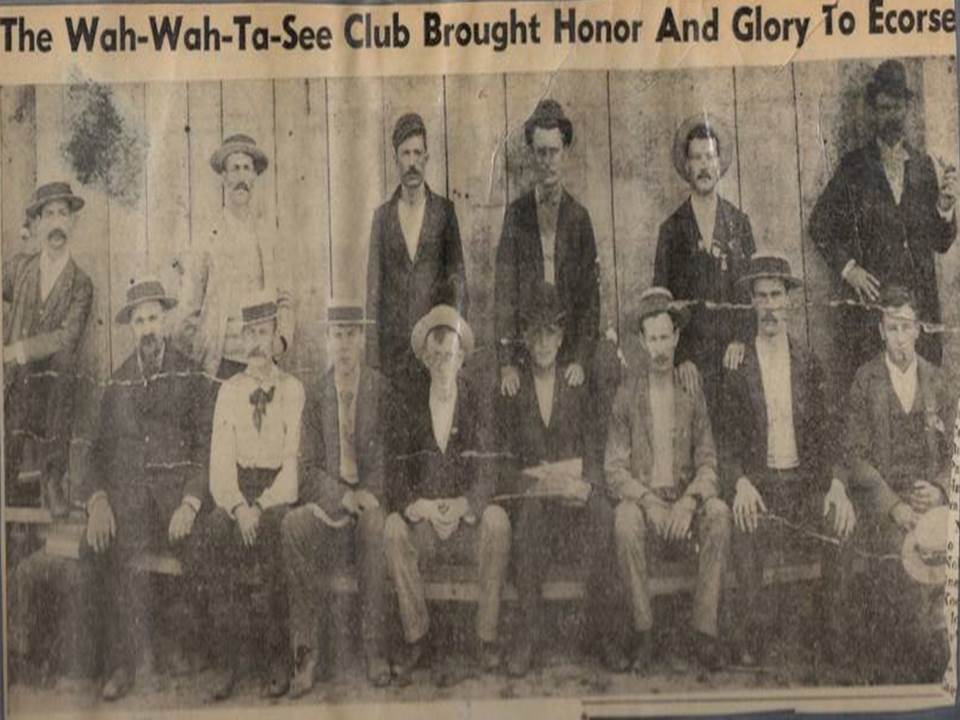 For nearly two centuries, the Riviere de Ecorces, or Ecorse Creek, the marsh and farm lands surrounding it and the village of Ecorse presented a rural face to the world. Apple, pear and peach trees that the early French settlers had planted showered blooms into its water. The marshlands that filled its mouth as it flowed into the Detroit River produced aromatic grasses that people used to feed their horses and cattle and even to stuff their mattresses. Settlers along its banks fished and caught frogs and  gathered wild berries beside it. Several saw and grist mills and coal and brickyards dotted the banks of the creek, but there was not enough industry located along it to affect the flow or purity of its water.

In 1901, G.A. Raupp of Ecorse, lumber dealer, guided a raft containing 2,500,000 feet of pine, hemlock, spruce and tamarack logs coming down the St. Clair River for use in his mill. One of G.A. Raupp’s other endeavors, the Ecorse Rowing Club, proved to be even more lasting than his mill which went out of business in mid century.  He was one of its founding fathers and helped organize its first crew in 1873.

Less than a decade after the close of the Civil War Ecorse became rowing conscious. Shells were unheard of in those early days, but huge crowds lined the river front to watch the competition of the first ten oar barge and later the eight and even six oar barge races that eventually turned the eyes of the world to Ecorse. Contemporary observers said that the interest in training created in this sport that eventually led to the world championships won by the famous Montie brothers “is what fanned the interest in rowing, not the large crews and cumbersome barges.”

The names of some of the first rowers and generations of championship rowers also appear on the 1876 map as owners of farms and land near Ecorse Creek. They include Beaubien, LeBlanc, Champagne, and Montie. Richard LeBlanc was one of the first to visualize the possibilities of a rowing club in Ecorse. He promoted the idea among his friends and in 1873 they organized a rowing club of less than twenty members. They called their organization the Wah-Wah-Tah-See Club, an Indian name for Indian names were the general custom in those days.

For a number of years the Wah-Wah-Tah-Sees rowed on the Detroit River in an eight oar barge. The  Montie brothers-Will, John, Lige and Frank- practiced with and apart from the rest of the Wah-Wah-Tah Sees. They were sawmill workers at the mill of Salliotte and Raupp and they worked twelve hour shifts rafting logs on Ecorse Creek and the Rouge and Detroit Rivers. When their work day finished, they went out on the Detroit River and rowed until dark in a barge with ordinary oars. For ten years they rowed and saved their money as well and after that decade of training and saving, they purchased a four oar racing shell, the best of its day.

In the 1870s, Southern and Eastern capitalists had introduced the business of rafting lumber and timber through the lakes. This business involved rafting sawmill logs for tugs and steamers to pick up or continue moving to their final destinations.  The steam tugVulcan, was a striking symbol of the growth of this business. During the year 1871, the Vulcan transferred twenty-four rafts of timber from Au Sable East. As a whole, the rafts contained about 20,000 feet of timber and not one of them was lost.  Many of these rafts floated down the Detroit River on their way to Lake Erie and Lake Ontario ports.

This maritime tradition in Detroit and the communities up and downriver from Detroit, including Ecorse produced badly needed revenue for business and people, and made the transition from rowing barges for business to rowing for sport and pleasure as smooth as a skilled oar stroke through Detroit River waters. These skillful rowers competed against each other in races and produced rowing clubs that produced community unity, pride, and tradition. The Detroit Boat Club began racing in 1839 and the Ecorse Boat Club in 1873.

The Montie brothers of Ecorse worked as raftsmen, riding the Rouge River outside of Detroit. Every  day, dressed in their working clothes – red shirts, blue jean overalls and heavy boots-they wrestled logs into the Rouge River, created timber rafts, an shoved and guided them to their destinations up and downstream. The brothers earned an area-wide reputation for their strength, endurance and love of French songs and French partying. They were so widely respected for their skill that the members of the Ecorse Rowing Club implored the Montie brothers to come and row with them permanently.

Such founding members of the Wah-Wah-Ta Sees as Charles Tank, the Beaubien brothers and Frank Salliotte convinced the Montie brothers that their strength and skill would make the club a winner. The Montie brothers didn’t know anything about strokes or the science of rowing, but their hands-on rafting experience had helped them develop great stamina. They could row all afternoon without getting out of breath and still sing their French songs, tell stories and celebrate their victories. When General Russel A. Alger presented the Wah-Wah-Ta-Sees with the best shell obtainable, the Montie brothers and other members spent many long afternoons rowing on the river.

The first real race that the Montie Brothers rowed took place at the Aragon Club in New York. They competed in a four oar shell that was extremely popular at the time and they won. Later they acquired a ten oar barge and this is the barge that the Ecorse men used to enter and win the Northwestern Amateur Rowing Association race at Bay City in 1880. The winning crew consisted of Will Montie, bow; John Montie; G. Beaubien; G. Sanch; Bob Montie; H. Seavitt; W. McLeod; M. Bourassa; H. Labadie.  E.J. Montie pulled oars in the race and W.A. Ferguson served as coxswain.

From this crew the Montie brothers organized the legendary four oar crew that went on in later years to defeat all competition. In 1882 the Wah-Wah-Tah-Shee Club entered the six oar barge race held in connection with the Northwestern Regatta and they won this race also. The winning crew included Phillip LeBlanc; G. Reach; Louis Seavitt; M. Bourassa with Ted Ferguson as coxswain. They covered the two mile course in the extraordinary time of 13 minutes, 57 ½ seconds.

In 1884 the Montie brothers rowed in the Regatta against such experts as the Excelsiors and the Minnesotas. After being beaten the first day of the Regatta when a broken rudder made their boat unmanageable, they came back on the second day to win the Regatta with a time of six minutes and 57 5/8 seconds for a one and one-half mile straightway course, nearly one minute faster than the record.

At the turn in the course, the Montie brothers were two lengths ahead and rowing at the unprecedented stroke of sixty to the minute. The endurance of the Frenchmen enabled them to hold that phenomenal stroke to the end of the race. They finished four lengths ahead of the Hillsdales and nearly a half mile ahead of the Centennials. Lige Montie summarized the race in his own words when he exclaimed that he and his brothers ha “beat de Hillsdales dat was just back from Hingland.”

One person on shore was certain as fog on the Ecorse, Rouge and Detroit Rivers about the outcome of the race. Old Alec Cicotte, John’s father-in-law (John married Eliza Cicotte and raised a family of three sons and two daughters) who had almost reared the boys from babyhood knew how strong and skillful they were. The story, probably embellished from telling and retelling but containing a kernel of truth, has it that when the Montie brothers won, old Alec sang and danced on the shore of the Ecorse River until he dropped from exhaustion.

On the day after the race, the four Monties were back on the Rouge River, wearing their blue-jean overalls and attending to their logging. On Sundays they would sit around old Alec Cicotte’s place near the Rouge River, wearing their Sunday clothes, their coats covered with medals. They won many other races, but they enjoyed talking about the one where they beat the Henley champions who had just returned from “Hingland” the most.