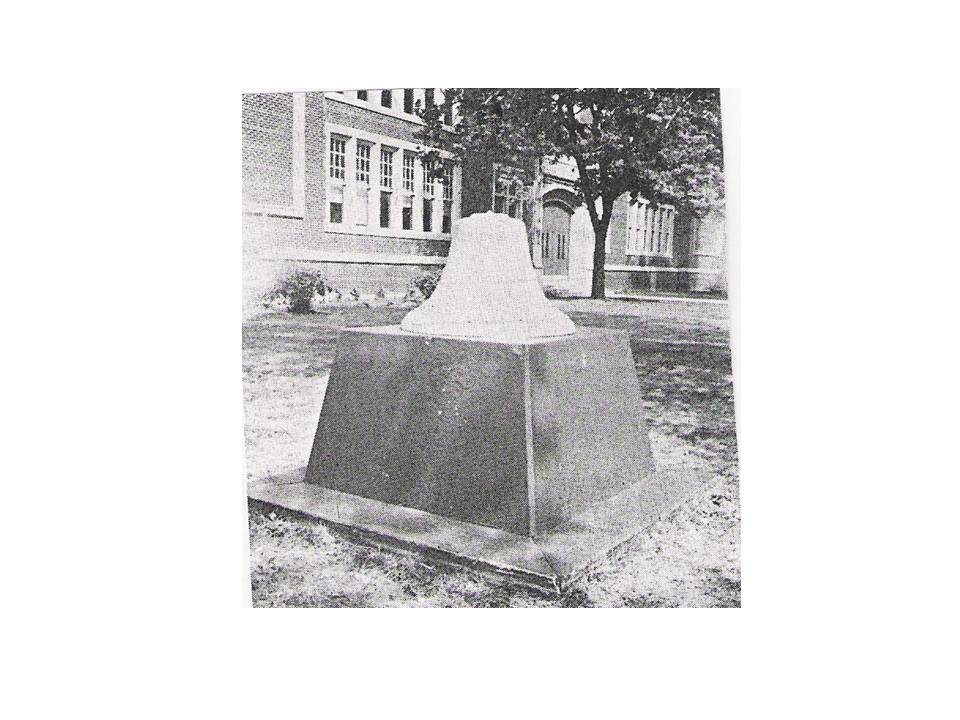 In July 1949, Ed McGee who lived at 26 E. Charlotte in Ecorse, harbored an unusual object in his back yard. The unusual object was one of the city's oldest, largest and loudest bells, so loud that some Ecorse old timers said that when the bell rang it could be heard all of the way to Wyandotte.

The bell originally hung in the old Ecorse City Hall at High and Labadie Streets. Ed bought the hall last year for wrecking purposes and the bell came as part of the package.

After tearing up a section of flooring and hiring a crane, Ed managed to move the bell to his home on Charlotte Street.

Weighing more than half a ton, the bell was cast of nickel and bronze by the Northville Michigan Bell and Foundry Company, which had long since gone out of business. Ed and Ecorse old timers estimated the bell to be about sixty years old. It rang in countless Ecorse Fourth of July holidays, fires, and it called hundreds of city councils to meetings. The only older bell in Ecorse belonged to St. Francis Xavier Catholic Church.

The Downriver Historical Society was interested in purchasing the bell and giving it a suitable inscription. The members wanted to mount the bell in the City Park or on the library lawn.

Ed McGee thought that would be a noble way to treat the old bell. "I sure would hate to see it melted down and sold for scrap," he said.

The school bell stands in front of Ecorse High School at the corner of Outer Drive and Seventh Street and occupies a place of honor and a place of history in the community. The bell weighs more than 1,000 pounds and it hung for 42 years at Ecorse School One, High and Labadie, which was the only school in the village of Ecorse. it called generations of Ecorse young people to school, but in 1952, school officials decided that the bell was too heavy for the aging building and ordered it removed as a safety precaution.

The bell was removed from School One during the summer of 1952 and rather than melt it down, Ecorse school officials at the time decided to preserve it and to mount it on a high concrete base in front of the high school.