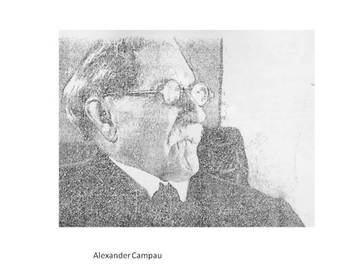 Centenarian of Ecorse Lies Down at Last to Rest

“For some we loved, the loveliest and best,

That from his vintage rolling Time hath prest,

Have drunk their cup a round or two before,

And one by one crept silently to rest.”

And into that world of yesterdays which flowed from the pen of the Persian poet and philosopher, Omar Kyayham, today has “crept silently to rest,” a well-loved old man- pioneer of the downriver area who closed his tired eyes at last from the shifting scenes of almost 100 years.

For today, at rest in Ecorse cemetery, very close to the place of his birth, Alex Campau has closed a lifetime of activity – a lifetime that in two short weeks would have numbered exactly 97 years.

Back in the days when Ecorse and the neighboring lands were Indian inhabited vastness, when the stagecoach was making its first run between Detroit and Monroe, Alex Campau was born – the second child and oldest son of Mr. And Mrs. Alexis Campau. The first wail of the man who was to live almost a century was heard from behind the hobnailed walls of a small frame house that today still stands on the lot next to the home in which he died, 3859 West Jefferson Avenue.

Tuesday morning a solemn requiem high mass at St. Francis Xavier church in which the Reverend Fathers John Kenna, Arthur Toussaint and A. DeCneudt officiated was chanted as last respects to the pioneer. He suffered a paralytic stroke last Monday and never regained consciousness until Saturday when, with the same spirit of peace and tranquility with which he lived, he “crept silently to rest” into the land of the shadows.

As a child he attended a little frame school house on Salliotte road, where a mere handful of boys gathered to learn the “three R’s” as taught by the one long-suffering teacher. But Alex was only a little fellow, eight years old, when the first shadow of sorrow crossed his life and death took the hard-working, generous-hearted man who was his father. After that, he did his bit in the fields and helped his mother in the house where she rented rooms to men who came to work on the laying of the first railroad line through this territory – the old Lakeshore railroad.

He was still a little fellow when he sometimes made the exciting ride to Monroe from Detroit and back again on a stagecoach which was driven by a distant cousin. It was as thrilling as a present day trip to New York to the youngster to ride, hot and dusty and thoroughly weary into Monroe at night-watch the lengthening shadows as he listened to tales spun by old and seasoned travelers and then crept to bed- to arise with the first pale streaks of dawn, to be ready, behind fresh horses, for that homeward trek. And, it was in Alex’s childhood that he learned the true friendly nature of the American Indian, for there was one – a stalwart fellow, who was helping to lay the railroad -, who roomed at Mrs. Campau’s house. The Indian took an instant liking to the active boy and went so far as to share his bed most of the time he stayed at the Campau home.

And so Alex grew to manhood working a little her an there with his brother – taking his threshing machine to neighboring farmers who had none-doing a little trucking business, taking the produce he grew on the farm to market, and delighting in making a good deal for it. The founding of the Tecumseh Salt Works in Ecorse found Campau one of its first workers clearing away the marshlands and the oncoming years never found him idle.

At the age of 23, he hitched up his horse and buggy one bright day – the twenty-fourth of July – and he and pretty Adis Salliotte, who lived a scant half-mile away, drove all the way to Wyandotte to be married according to their faith. They returned to Ecorse, however, and worked together with the land and the stock that constituted Alex’s farm.

Five children were born to them; one – a little boy, dying in infancy. The four other children are living today, mourning the death of a father they always knew to be kind, just and devoted to them. Two of his daughters, Lillian and Agnes, never married, and it was in the home with them that he shared his last few years – almost blind and totally deaf.

Another daughter, Florence Drouillard, married but is still living in the town near her father’s home. His son, Ernest, lives but a few doors away from the home site. Also left to mourn is a sister, Mrs. Mathilda Grant, who lives at Ernest’s home.

Always a devotee of hunting, fishing, hiking an vigorous outdoor sports in his youth, the advancing years left the pioneer lonely and not a little bewildered as hie steps slowed and his eyesight failed. And when he hearing went completely he turned to the vivid memories within his heart for consolation. And so the last long twilight days found him, a solitary figure sitting in the window of his home – gazing not upon the busy street that is now West Jefferson Avenue – but back down the muddy lane of his childhood-past the milestones that took away the pristine liveliness of the land that he had tilled with his own hands – and turned it into the noisy paths upon which industry today travels swiftly forward.

And those were the last words ever spoken by the grand old man of Ecorse – Alex Campau. A few moments after they were uttered last Monday, he collapsed on the floor of his home, and a few days later quietly passed on into the land in which his memories – his loves of yesterday-were awaiting him.

Services were held Monday morning for Mrs. Florence Campau Drouillard, 86, a lifetime resident of Ecorse and member of a pioneer Downriver family, who died Thursday in the old family homestead where she was born, at 3859 West Jefferson.

Mrs. Drouillard was the last descendant of one branch of the Campau family, which was one of the first to settle in the Downriver area. She was one of four children born to the late Alexander and Ades (Salliotte) Campau. The Salliottes also were among the early settlers in the area.

Mrs. Drouillard had lived alone in the shadow of the Great Lakes Steel Corporation since the death of a brother Ernest, six months ago. Two sisters, Lillian and Agnes, died some time ago.

Much of the land on which her ancestors settled was still in her possession. She owned 650 feet of frontage on Jefferson directly south of the steel company’s main entrance.

The land, once woods and farm fields, is now occupied by used car lots, parking areas and buildings. Part of it is still cultivated as truck gardens, but the Campau family itself long ago gave up farming.

The house she died in is still a farmhouse. An old barn at the rear of the house was torn down only a few months ago. In the near future, 1 ½ acres of the southerly portion of the property will become the site of a proposed new police station and municipal court building. At a special meeting last week, the Ecorse city council agreed to purchase the land for $55,000.

Earl E. Montie, a himself a member of a pioneer Downriver family, and a longtime Ecorse resident, was Mrs. Drouillard’s attorney. In this capacity and from close association with the Campaus, Drouillards and descendants of the area’s other early settlers, he acquired a treasure trove of historical lore.

Montie said Mrs. Drouillard’s mother was Ades Salliotte, another pioneer name in the downriver area. During her marriage to Frank L. Drouillard, Mrs. Drouillard had a home on Salliotte Street in Ecorse. But she returned to the family home after her husband’s death many years ago.

Alexander could recall first hand the Indians who hunted and fished in the region. He could remember when he shot deer where the steel plant is now, when Jefferson was a mud trail called the River Road.

He passed on to his children the stories he heard from the participants of skirmishes on Fighting Island during the War of 1812.

The recollections died with Mrs. Drouillard who had no children of her own, or nieces or nephews to pick up the thread of history.

The body is at the Frank Gallagher Funeral Home, 10750 Jefferson west, Ecorse.