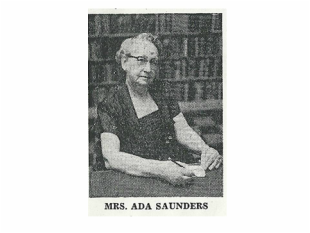 When Mrs. Ada Saunders took over the duties of Ecorse librarian on March 22, 1926, there were 600 books on the library shelves in the library’s temporary quarters in the De Wallott Building on Jefferson Avenue and before than on a shelves in the back of Loveland’s Drug Store. In 1947, when the library moved into its new home on West Jefferson and Outer Drive, 13,300 books filled the rows of shelves. In 1957, when Mrs. Saunders retired, the Ecorse Library’s collection contained 20,000 books and about 350 people a day visited the library. More than 8,000 civic group members used the Ecorse Public Library every year.

B.E. Loveland, who provided space in his drug store in 1922 for the first library in Ecorse said, “After looking at the great strides the library has taken under Mrs. Saunder’s able supervision, I am happy to have had some small part in the establishment of the library. I think she has done a wonderful job.”

Miss Luarine Hurford of Wyandotte, patronized Ecorse Library from the time it was located in the DeWallott building. She said, “Mrs. Saunders is a fine librarian and the library is a lovelier place because she is there.”

The Ecorse Public Library continued to grow with Mrs. Saunders supervision. The city opened two branches in other parts of town to provide library service to children who couldn’t walk to the main library. One library, established in the municipal building on High Street, stopped operating in 1945 to make room for the Veteran’s Administration Office. The other, opened on Visgar Road in 1935, still operated in 1956. Mrs. Saunders worked hard to arrange bus service to the main library from Schools One, Two, and Three so that over 1,000 pupils each month could visit and check out books.

Mrs. Saunders started sponsoring Christmas parties for a small number of school children in the old library in the DeWallott building. The number of children attending grew with the years. The Christmas party of December 1956 at the main library on Outer Drive and Jefferson attracted 1,500 children over a three day period who enjoyed colored movies and Christmas treats from the city of Ecorse. Her parties delighted three generations of Ecorse youngsters, many of them grandchildren of Ecorse citizens who had originally borrowed books from the library.

Born in Bonne Terre, Missouri, Ada Saunders attended state normal schools in Springfield and Cape Girardeau, Missouri. She held a life teaching certificate in Missouri and taught six years in public schools there. After arriving in Ecorse in 1920, Mrs. Saunders worked as a substitute teacher for three years. She earned a degree in library science at Wayne University completed many University of Michigan extension courses.

Over the years, Mrs. Saunders worked out a formula for her success as a librarian. She explained it by saying, “My years as a librarian have been my recreation rather than a position. No career was ever made over night and mine  is no exception, requiring years of constant preparation and planning. A librarian must have a great desire to serve the people because a library is an integral part of a community.

Mrs. Saunders, her husband Otto, and her son Waldo Crump and his wife Margaret lived together on a small farm near Flat Rock. Another son, Stanley Crump, his wife Iris, and their three children lived in California.

A life-long Democrat, Mrs. Saunders said that after she retired she intended to strenuously campaign for her friend Governor G. Mennan Willams “when he runs for president.”

After 32 years as a librarian in Ecorse, Mrs. Ada Saunders retired in May 1957. On July 8, 1957, she and her husband Otto set out for California. Cross country trips were nothing new to Mrs. Saunders because she had already visited 45 states and seen much of Canada, but she and her husband Otto had a different reason for this trip to Pleasant Hills, California, about 40 miles south of San Francisco. The Saunders were retiring to a home that her son Stanley Crump and his wife, Iris, had furnished and decorated for them. The Crumps and their three grandchildren were waiting for Ada and Otto when they arrived. Mrs. Saunders said that their three grandchildren were “the real reason we decided to leave our farm near Flat Rock and move west,” Mrs. Saunders said.

Ada Saunders’ son, Waldo Crump and his wife Margaret bought the farm where they had all lived, and they drove Ada and Otto Saunders to California. Otto had not been well since he suffered a stroke two years before, so Mr. and Mrs. Saunders were glad of the chauffeuring and the company.

Since she had worked since 1906 as a teacher and then a librarian, Mrs. Saunders looked forward to getting rid of her timepieces. “I’ve been a clock watcher too long. I have no intention of living by the clock during my retirement years, and the only work I expect to do will be to tend my garden and keep the house neat,” she said.

Mrs. Saunders was proud of her tenure as the head librarian of Ecorse. She established the reputation of Ecorse Library as the best public relations library in Wayne Country, enjoying friendly contacts with all community groups and working tirelessly with city officials, police, school, and church officials, businessmen and local organizations. Under her leadership, the library sponsored and assisted in the activities of many community organizations including the Women’s club and Boy’s Club, which she helped organize. The Ecorse Library also hosted the Ecorse Book Club, the Library Science Club, story hour groups, adult education programs, citizenship classes, and programs for community groups. Girl Scouts, Boy Scouts and Girl Reserves also met at the Ecorse Library. Mrs. Saunders supervised many students from Ecorse High and St. Francis Xavier working as pages in the Ecorse libraries. Some of her students went on to head branch libraries and others became teachers. Most of them attended college.

Her colleagues, the people that Mrs. Ada Saunders had associated with for years, and her friends said that she had never made an enemy. Everyone in public or private life that she dealt with had been impressed by her fine character and ability in her chosen field. They said that she was a really good librarian and made Ecorse’s library one of the top public institutions in the state.

As for Ada Saunders, she said that the thought of leaving the job she held since March 22, 1926, left her with mingled emotions of joy and sorrow. “I will be unhappy to leave my friends, whom I will miss more than my work, but it is pleasant to know that I will be able to retire and have sufficient funds with which to live comfortably.”