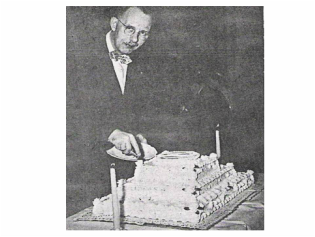 The Ecorse Kiwanis Club observed its 50th Anniversary in March 1977. The Club was orgganized back in 1927, near the end of the roaring twenties. From that point on, its members committed good deeds in Ecorse.

In the 1920s the United States prospered more than any other nation on earth and changed more than any other time in its history. Ecorse was a little village, its people virile in character, rugged from making steel and automobiles, yet possessing strong individuality and a deep religious faith. Ecorse people matched the personality of their village.

Only eleven years after the national Kiwanis Clubs had been organized, Dr. William Angus, then the minister of the Ecorse Presbyterian Church, first suggested the idea of an Ecorse Kiwanis Club to Burton E. Loveland, Claude J. Miller and Ellis S. Underill. These men-despite the fact that Detroit's number one Kiwanians Joe prance, Harry Young and Donald Johnson did not believe that such a club would last very long in Ecorse - set out with dogged determinated to show the world that Ecorse, too, had civic pride. They held many organizational meetings in Jack Riopelle's law office. Finally, on March 17, 1927, Ecorse Kiwanis Club was chartered as club number 1385, sponsored by Kiwanis Club Number One with Donald Johnson, Joseph Prance and Harry Young officiating.

The Governor of the Michigan District, Lewis C. Reimann, presented the official charter to Burton E. Loveland as the charter president and Clarence R. Mead as club secretary.

The years after the charter were years of struggle. During these formative years, the organizers met wherever possible. They met in their homes, in Standard Restarant, over Loveland's Pharmacy, in the high school cafeteria, in the Leonard Duckett Center. From the very first meeting at the Standard Restaurant, the Kiwanis proved to be a training ground for leadership. Its beginning projects tended to be highly individual because the economic conditions of many families presented opportunities for helping to pay dental and doctor bills, buy glasses for children, and buy crutches and braces for crippled children.

As the years went on, the Ecorse Kiwanis began to sponsor civic projects and assist cit officials in making them a reality. Some examples of the first 25 years of activity in the Ecorse Club include:

These were just a few of the Ecorse Kiwanis Club Projects over the next 25 years.

Ecorse Kiwanis spent thousands of dollars on community betterment projects during its first 50 years. It sponsored or assisted city officials in working on a Post Office for Ecorse, widening Jefferson Avenue and Southfield, promoting the Great Lakes St. Lawrence Waterway, promoting recreational, promoting Ecorse Park, and promoting clean water and air. Every year Kiwanis sponsored the collection of monies for the March of Dimes and Kiwanis Kids Day.

Over the years that Ecorse Kiwanis Club served the City of Ecorse, 50 men served as the Kiwanis Club's president. They were:

In 1977, the Ecorse Kiwanis Club had 26 active and senior members. The club regularly met on Tuesday at 6:15 p.m. at Ciungan's Shrimp House at 151 Southfield in Ecorse.