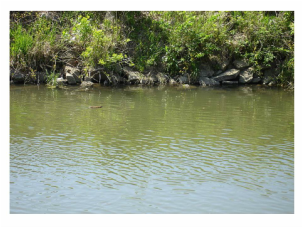 Trapping and eating muskrat or the “marsh hare” has been a Downriver tradition since the French settlers who came with Cadillac trapped them for fur and meat. The muskrat, considered an epicurean delicacy when correctly prepared, is one of the cleanest of all animals, living on roots, herbs and marsh grasses.

Muskrat dinners were and are popular in the entire Downriver area. The Cincinnati Times Star once quoted an invitation that a Frenchman named Pete extended to people to visit his Grosse Pointe home. He told them that his “ole womans” would cook mushrat for them and it would be so good that they would say dat de mushrat is de fines’fish w’at swim de lac.”

Many a young man growing up in Ecorse and all of the other Downriver communities remembers trapping muskrat and taking them to the restaurant of Sam Pappas to be expertly cooked and served. Gus Pappas, Sam’s son, has a colorful cache of muskrat stories from the days that he trapped them in Ecorse Creek and the Detroit River.  Many Downriver French chefs have transformed preparing the plain muskrat roast into a gourmet exercise. In the Downriver tradition, the Ecorse Boat Club sponsored many muskrat dinners as fund raisers.

In February 1957, good news appeared on the gourmet front with the announcement of an Aquaba (muskrat) supper to be held beginning at 4 p.m. on Friday, March 8 at the St. Francis Xavier school auditorium, Outer Drive at West Jefferson, Ecorse.

Sponsored by the St. Anne Rosary Altar Society, the supper provided an “eat treat” for muskrat supper fans who have little opportunity to enjoy the delicacy as prepared by Gene Maurice. A renowned French style chef, Maurice prepared the muskrat from a jealously guarded French-Indian recipe handed down through his family for several generations. Anyone who preferred fish instead of muskrat  could order it when purchasing tickets a few days in advance of the supper.

Mrs. Maria Lambrix, president of the altar society, named Mrs. Russell Goodell and Mrs. Leo McCourt co-chairmen of the supper.Tickets were purchased from members and at the door. Reservations could be made by calling Mrs. Lambrix, DU-1-3118.

Mrs. Ella LaJoie was in charge of the kitchen and Mrs. Mary Layos of the dining room. They were assisted by men and women of both groups. On hand again this year as in the past in preparing this rare delicacy was Edwin Montry, James Clemens, Edward Lacross and Edward Stewart.

Mr. Stewart, president of the Moms and Dads club and Mrs. John Chrapko, president of the Altar Society, extended an invitation to all to attend the dinner. For those who were a little “leery” of trying the muskrat, there was plenty of fish and side dishes on hand.

Many Downriver residents, especially Catholics, are not aware of the reason they may eat muskrat on Fridays, since it obviously is not fish. In fact, this is the only region where muskrat is permitted to be served on Friday by the Catholic Church.  A papal decree made this permissible back in the early 1700s, when during a famine, the early French settlers were hard pressed to obtain food.  They appealed to the Pope, who granted a special dispensation for the people from Port Huron to Toledo along the waterway, and in certain parts of Canada. This right has never been revoked.

A tradition in the Monroe branch of the Reau family has it that the dispensation dates from the winter of 1813, when their family members were fleeing their homes after the battle of the River Raisin. They fled across the ice to Guard Island in Maumee Bay. Father Gabriel Richard of St. Anne’s in Detroit found them huddled together in a starving heap in some Native American huts. They begged Father Richard for a dispensation to eat muskrat on Friday. Father Richard granted them their dispensation and since then settlers in the Maumee Bay area have claimed the dispensation to eat muskrat only for themselves and not for the rest of the French of Monroe or Newport.

Another Monroe version of the Muskrat legend says that Catholics petitioned the Pope in Rome to declare the muskrat to be a fish since it lives in and around water . They argued that eating muskrat on Friday would be an inexpensive way to fulfill the requirement of not eating meat. Local legend has it that several French trappers in Monroe asked their priest whether or not muskrat could be a fish. Puzzled, the priest called a town meeting and the citizens debated the biological classification of the muskrat long and loud. Finally, an old Frenchman stood up and declared, “The rat, he live in water- he no animal. The rat, he walk on land – he no fish. He mus’ be vegetable.”

Before the Second World War, countless Downriver housewives called on local trappers to provide muskrats throughout the season for regular Friday meals.

Bishop Kenneth Povish in Lansing declared the muskrat question resolved in 1956 when the church ruled that eating muskrat dated so far back that it had become an “immemorial custom,” as dictated by canon law. The bishop added that “anyone who could eat muskrat was doing penance worthy of the greatest saints.”

The Kola Food Factory in Riverview is one of the Downriver Restaurants that service muskrat. Owner John Kolakowski is an avid hunter. In the mid 1980s after the United States Department of Agriculture closed down all Michigan muskrat farms, John came up with the idea of importing muskrats from Canada. His muskrat dishes are popular during Lent and all year around with many customers.

Muskrat can be roasted in tomato sauce, accompanied by cabbage and potatoes or apples and onions.

Put rats in bottom of a roaster.
Pour sautéed mixture over the rats, and then cover
with tomato soup.

Salt and water for soaking

Cut muskrat into serving pieces and soak overnight in salt water to cover. Drain and dry. Dredge with mixture of paprika and chili powder. Place on grill over coals with a drip pan underneath. Mix remaining ingredients and correct seasoning. Baste meat frequently and turn often until tender.