Ecorse Celebrates an Anniversary and Holds a Council Meeting, July 1975 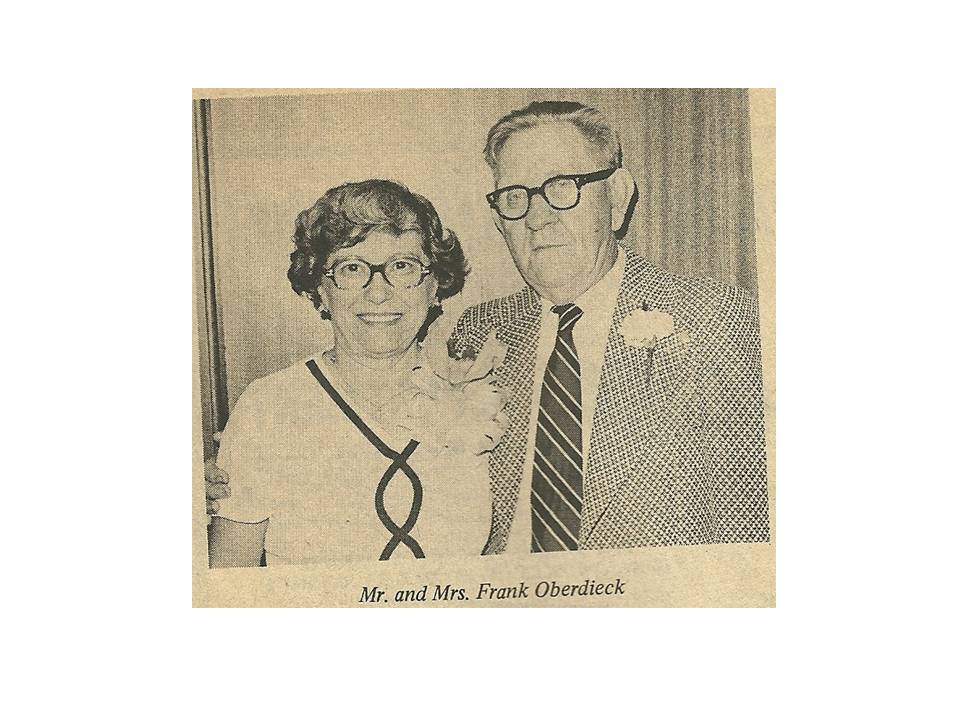 Not knowing what the future might bring, but confident that their

WHEREAS, Frank and Elizabeth have lived in the City of Ecorse, Michigan

Commissioner. She and Frank have been very Loyal and Faithful

Citizens of the City of Ecorse, and

WHEREAS, This couple is now celebrating along with their son, daughter-in-

WHEREAS, The celebrants are still youthful in Thought and Spirit and will

Their son and family, and

WHEREAS, After fifty years of devotion to each other and their family, are

Celebrating July 12, 1975, with a dinner party at the Ciungan’s Shrimp

House, Ecorse, Michigan, with all of the family and devoted friends.

NOW, THEREFORE, I, Charles G. Coman, Mayor of the City of Ecorse, on

Behalf of the Elected Officials and Citizens of Ecorse, hereby extend

Congratulations and warmest wishes for many more years of Health

And Happiness to Frank and Elizabeth Oberdieck.

An Ecorse Advertiser story of Wednesday, July 16, 1975, reported that the Frank Oberdiecks Observe 50th Anniversary. The story said that Mr. and Mrs. Frank Oberdieck of East Rockwood, Ecorse, were the honored guests, July 12, during their 50th wedding anniversary dinner party, attended by 41 persons, including relatives and friends, at Ciungan’s Shrimp House, Ecorse.

The couple was married July 12, 1925, in St. Catherine Sienna Catholic Church, New York City. The Oberdiecks moved to Ecorse in 1928, where they have lived in their East Rockwood Avenue home for 47 years. Frank Oberdieck is a retired McLouth Steel employee.

Mrs. Oberdieck is the former Elizabeth, “Elsie” Stahl. She and her husband have a son, William, of Ecorse, daughter-in-law, Liz, and one grandchild, Elizabeth.

Besides the milestone anniversary of the Oberdiecks, the Ecorse Advertiser also reported that Ecorse Mayor George Coman and the city council were considering passing a stricter ordinance which they hoped would result in a cleaner Ecorse.

During the discussion at the Ecorse Council meeting on Tuesday, July 15, 1975, Council revealed that the ordinance was being drafted and would probably be ready for its first reading in two weeks. The ordinance concerned rubbish and garbage pickups and spelled out that each Ecorse resident would be responsible for cleaning half of the width of the alley behind his/her home.

Residents from Fourth, fifth and Sixth Streets, between Southfield and Mill Streets, petitioned the City Council to have the alleys cleaned behind their homes. City Engineer Tim Hennessey said that he drove through the alleys on July 13, after receiving the petitions. He ordered the Department of Public works superintendent to see that they were cleaned. Mayor Charles G. Coman said, “It’s sad when people have to petition to get their alleys clean.”

On the other hand, Mayor Coman defended city personnel and stated that when the city cleaned the alleys, a day later they were dirty again. ”There’s no cooperation from citizens,” he said.

Mayor Coman said, “I’m not condemning the city at large, but we accept our fault, we won’t shirk that, but the people have a responsibility.” Mayor Coman gave several examples of ways people don’t cooperate with the city’s efforts to maintain clean alleys and streets. He said people cut their grass, put the clippings in the street, and then scream when the sewers block up. “People have a responsibility too,” Mayor Coman said.

He added that the city DPW has “put up a good effort during the last couple weeks to clean the streets and alleys, “but the citizens have to cooperate too,” he said.

Councilman Alex Petri said that he drove through all the alleys in precinct eight – Southfield to Mill- and he said, generally, it appeared that the DPW had been picking up. “Where the problem existed it was created by residents,” Councilman Petri said. “Trees, limbs and debris were thrown into the alley, blocking it,” he said.

Councilman Lee Silva, speaking about the proposed ordinance said unless the ordinance is enforced, “you can talk all night here.”

Mayor Coman also revealed that his office has been receiving many calls from residents who say that when they call the DPW to complain or ask for services, they get abrupt answers. This has angered the mayor. He said residents deserve better treatment. He ordered that all calls to the DPW be forwarded to his office where they will then be referred to the proper department and he will follow through to make sure that the request has been taken care of properly. The city will inform all residents about the new procedure.

Councilman Mrs. Dora Gaines reported that she has received complaints from residents that rats are roaming the area. She said that she has checked out the complaint and found that “the entire town is loaded.” She moved that the city take immediate steps to hire a rat exterminating firm. Council approved her resolution.

Charles A. Hunter II submitted the petitions from 46 residents. Mayor Coman said that there are a lot of children on the street and the residents are complaining that driver use it as a speedway, that’s why they are requesting the speed bumps.

Responding to the mayor, Police Chief Charles Oltean said that his department has not received any more complaints of speeding on Knox Street than on any other street.

Mayor Coman ordered Chief Oltean to keep an eye on the street to assign a car to the street and to give a recommendation.

Mayor Coman said that in his neighborhood there are “a couple guys who go fast on the street.” He said, “If we can nail a couple of them, maybe the word would get around. We don’t want to drag our feet on this.” He ordered the police chief and Engineer Tim Hennessey to have a recommendation in two weeks.

A petition was also received from about 50 residents who live on High Street, between Southfield and Mill Streets. They are requesting that trucks be prohibited from entering or leaving High Street, from Southfield or Mill.

After some discussion, Mayor Coman referred the petition to Police Chief Oltean. Engineer Hennessey and City Attorney Victor Mitea for recommendations, Councilman Alex Petri suggested that the trio also consider High Street from Southfield to the city limits at River Rouge, in addition to the petitioned portion.

Other Council actions included granting the Ecorse City Charter Revision Commission permission to hire an attorney to put a proposed city charter in shape for an upcoming election. Ecorse Mayor George Coman moved that the request be acted on favorably and he said that the attorney would received $45 an hour. Councilman Alex Petri amended the motion to state that unless the attorney completed the work in ten hours, he wouldn’t receive any pay. Council approved the resolution.

City Engineer Tim Hennessey was given the task of setting in motion a request from the Library Commission that protective screens be installed on the windows at the back of the library.

Mayor Coman reported that during the current week, city crews have cleaned 5,380 feet of sewers. The previous week, the city cleaned 6,300 feet. So far, he said, five miles of sewers had been cleaned.