Jim Rice, a Larger Than Life Coach in the Small Town of Ecorse 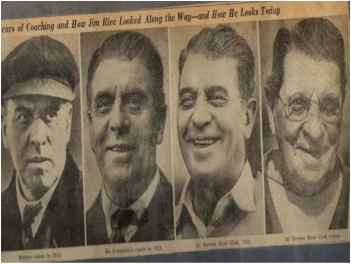 Rowing is an in intellectual sport that dates from ancient Egypt and Rome. The first rowing race in America took place on the Schuylkill River in Philadelphia in 1762, and by the 20th century rowing had gained a quiet but firm niche in sports. He didn’t arrive quietly, but Coach Jim Rice firmly brought international renown and fifty years of experience coaching championship rowing crews with him when he accepted his niche coaching spot at the Ecorse Boat Club in the small town of Ecorse, Michigan, in 1942. Its location about eight miles outside of Detroit along the Detroit River made Ecorse a good training ground for rowers.

A tall, strapping man, six feet in his stocking feet, Rice developed the two fisted manner and the roaring voice that were his trademarks early in life. He was born on Hiawatha Island in Lake Ontario off of Toronto, but he usually waxed vague when asked his age. Hiawatha Island was also the home of Ned Hanlan, one of history’s greatest singles scullers, who taught Rice the fine points of rowing.

Rice’s first coaching job was with the Toronto Rowing Club in 1893, and in 1899, he came to coach at the Detroit Boat Club. He stayed until 1904 when he accepted an offer from the Weld Boat Club at Harvard. After a two year stay at Harvard, he transferred to Columbia University where he served as head coach for 17 years until 1923. In 1927, he returned to the Detroit Boat Club, staying through 1932.

The Hamilton Leanders then obtained his services and he coached them for three seasons, returning in 1936 for three more seasons at the Detroit Boat Club. He coached for three years at Wyandotte Boat Club and finally went to the Ecorse Boat Club in 1942, where he stayed until his retirement in 1947. When he agreed to coach the Ecorse Boat Club after the death of his friend Charles Tank, Ecorse and nearly every other rowing club in the country recognized him as one of the top ranking rowing coaches in America.

An Oarsman Recalls His Coach

Larry Le Blanc, one of his oarsmen, recalls the sights and sounds of the 1940s Ecorse Boat Club clubhouse and the presence of Coach Rice. "Cold showers between corrugated walls while an East wind pushed cold through the sliding doors that faced the River. The glowing pot-bellied stove in the club room around which sat Jim and well toasted oarsmen. The hub-bub of pool playing, ping pong and the endless streams of creative profanity."

After Jim Rice took over as coach in 1942, the Ecorse Boat Club began a long, steady winning tradition. He used his roaring voice and two fisted manner to inspire rowers to pull the extra oar. In the five years that he coached Ecorse crews-1942-1947- Coach Rice produced many winning teams and a proud tradition for Ecorse. His Ecorse crews topped the Canadian Henley in 1942,1943, and 1944, and he was very successful with other Boat Club crews during this time. His 1945 record was outstanding, and during the 1946 season, Coach Rice's crews were among the best in the United States.

In 1947, after over fifty years of coaching, Jim Rice told the Ecorse Boat Club that he would not be able to resume his coaching duties because of ill health. A story in the August 18, 1953, Detroit News by George E. Van announced the death of Coach Jim Rice. "The Jim Rice story ended in New York today when they buried the great rowing coach."

The Measure of a Coach

Van said that Big Jim's boys didn't win all the races or even a large part of them in those years at Toronto, Detroit, Harvard, Columbia, Pennsylvania, Wyandotte and Ecorse, but they came across first often enough to give him a top ranking forever in the sport. Those who knew the venerable mariner, and he definitely was a man of the water, remember the salty, blustery character of the man rather than his accomplishments as a coach.

As fine as his record was in rowing, those who knew Rice always will talk of Rice, the man, a fellow who loved life and lived it to the hilt. He was somewhere in his mid eighties at his death. "He always kidded about his years, but when pinned down would tell the story about his father having put the date down in the family Bible as 1872," Van concluded.