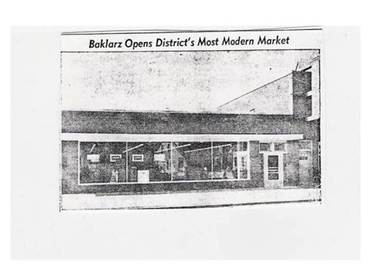 A family partnership composed of Mrs. Frank Baklarz, her three sons, John, Ted and Ed and daughter Jean are enjoying this week praise and congratulations from thousands on the opening of their new store. They new store at 185 Southfield Road, will be known as Baklarz Super Market and it is all that the name implies, super in every respect. Super in convenience, building, fixtures and merchandise.

The new store was thrown open to the public Tuesday but starting today and continuing through Friday and Saturday the new Baklarz Super Market will celebrate its grand opening with a sale of quality foods and the awarding of 15 valuable prizes to those attending the opening.

The name “Baklarz” has been identified for quality food market in this area for nearly a quarter of a century. Frank Baklarz, the husband and father of the present partnership, first opened a food market in Ecorse in a small store at Southfield and High Streets in 1918.  In less than six years the business outgrew its facilities and Mr. Baklarz moved into a much larger store at Southfield and 4th Street. Here, too, the success of the Baklarz Food Market soon made this store inadequate for the ever growing business and shortly before the war the building was greatly enlarged and completely remodeled.

A year ago, as plans for the present new super market were being made, Mr. Frank Baklarz died. The entire family, now formed into a partnership, is carrying on and the family’s dream of the finest and most modern food market in the downriver area has been fulfilled.

The new store occupies nearly 5500 square feet of selling space with additional space, including the old store room for stock rooms and refrigeration. The store has been so arranged as to provide a combination of self-serve and counter service and with the all new, modern fixtures, display cases and refrigerated counters shopping will be easy and convenient. Modern lighting and air conditioning make shopping in the new store more enjoyable.

The new store was designed by Arthur Greig and Associates. River Rouge architects M.S. Layton, of Wyandotte was the general contractor. Cloutier & Sons did the electrical work and Ray Meade contributed to the plumbing. Carter Hardware installed the tile and the Western Refrigeration and Equipment Co. installed all the refrigeration.

Ample parking space has been provided at the rear of the new store.

“We are happy to be the first to offer the people of this area a strictly modern super market,” John Baklarz said. “And with these new improved facilities we will carry on the policy of service, quality merchandise and low prices established by my father over 20 years ago and which has been responsible for the success of the Baklarz Market.”

Over 12,000 residents of the downriver area visited the grand opening of the Baklarz Super Market last week end. Starting early  Thursday morning and continuing until late Saturday night residents of this area crowded the store and taxed the facilities of this largest, most modern and complete super market.

Most of the patrons came from Ecorse and River Rouge and all were interested in the free grand prize drawing for 15 prizes awarded to the visitors at the three day opening.

The drawing was held at eight o’clock Saturday night. Winners have been notified of their good luck.

The Baklarz family came to Ecorse in 1918, at which time the original Baklarz Market was established at the corner of High Street and Southfield Road. During the year 1924, the business was moved to 185 Southfield Road. The widening of Southfield Road in 1940 resulted in the reconstruction of the Baklarz Market building. The last expansion took place during 1950 when the floor space was tripled and all modern shopping facilities were installed.

John Baklarz, whose name is well known to thousands of downriver citizens, has always been active in local civic and business groups. His paramount concern is to make Ecorse a better place to live and to work. He believes that opportunities are in store for progress minded businessmen, and, as we witness the progress of Baklarz Super Market, we find his remarks are well founded.

“One of our greatest assets in Ecorse,” comments Baklarz, “is the community spirit of our citizens. Should you care to make your own personal survey you would discover that most Ecorse people prefer to shop at home. Ecorse businessmen who realize this fact have presented greater variety and better service and consequently have experienced rapid growth of their business establishments.

“In my opinion,” Baklarz continued, “the businessmen of Ecorse should reward this fine community spirit by organizing a joint program designed specifically for the purpose of acquainting the residents with the variety of services and merchandise which are available in their own community. This function, of course, would be a project of the Ecorse Merchants’ Association. It would include any merchant who is community-minded and who can offer an Ecorse resident the best quality of service for his or her shopping dollar.”

Baklarz suggested several mediums for such a program. One idea to consider was “Ecorse Dollar Days.” Another was “Ecorse Coupon Days,” and still another was a merchants sponsored contest featuring attractive prizes for Ecorse shoppers.

“I strongly urge Ecorse businessmen to attend the next meeting of the Ecorse Merchants’ Association,” said Baklarz, “because at this meeting they will have the opportunity to express their thoughts. A combined effort on the part of the businessmen will most likely meet with overwhelming response.”