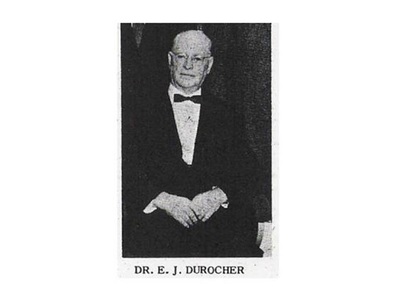 Dr. Francis J. Durocher, the brother of Dr. Edmond J. Durocher, practiced medicine in Ecorse. A Canadian Medical Journal lists him as dying on February 8, 1912,  at the relatively young age of 40. In 1913, his brother Dr. Edmond  Durocher came to Ecorse to practice medicine.

Census records reveal the bare outlines of Dr. Francis Durocher’s life.  He was born in Canada in1 872, and immigrated to the United States in 1898. The State Board of Registration shows that he married Miss Bella Montie, of Ecorse on October 4, 1902. Isabella or Bella Montie, was the daughter of Richard and Eliza Montie of Ecorse. Their daughter Marguerite was born on July 27, 1904, and their son
Francis was born in 1912.

The inscriptions don’t reveal how and why both the Francis J. Durocher’s died. The 1920 Federal Census shows that Bella Durocher, 37, lived with her eight year old son Francis and her 15 year old daughter Marguerite. Her mother and father Richard and Eliza Montie, both 62, also lived there.

Dr. Francis J. Durocher practiced medicine in Ecorse for at least a decade. This was one of his cases.  The accident happened in 1901, when he had just begun to practice in Ecorse. The Evening Argus of September 25, 1901, tells the story of Mrs. Luella Barron of Ecorse. She was instantly killed on Salliotte Road shortly before 5 o’clock on Tuesday, September 24 by a Michigan Central mail train which was northward bound.

She was the wife of Philip Barron, an Ecorse saloonkeeper, and was 26 years old. Mrs. Barron, her 8 month old child, and Belle Beaubien, age 14 years, had gone to visit Mrs. Felix Cicotte, Mrs. Barron’s mother, who lives on Salliotte Road.

Mrs. Barron did not notice the approach of the train until it was almost on her. She had never driven a horse before and it is thought that she became frightened and, jerking at the reins, confused the horse. The engine of the mail train hit squarely between the horse and buggy. The horse was thrown fully 150 feet on the right hand of the track while the pieces of buggy were scattered alongside the left side of the track for 100 feet. Mrs. Barron was thrown in a ditch and the buggy box was found on top of her.

Dr. Durocher of Ecorse says that her skull was fractured and her hip broke.  Belle Beaubien had one leg fractured, but managed to get away from the accident and was found yelling hysterically in a house nearby. The baby was picked up alongside the track about 10 feet from the place of accident, unhurt but greatly frightened.

Dr. Edmond J. Durocher came to Ecorse to practice medicine in 1913. He eventually established  an office on Jefferson Avenue in Ecorse, although he and his wife Sadie and their children  lived on Meridan Avenue in Dearborn. The 1941 Polk City Directory lists Dr. Edmond Durocher , physician, with an office at 4158 West Jefferson in Ecorse.

An Ecorse Advertiser article  dated May 3, 1962, paid tribute to Dr. Edmond J. Durocher.One of Ecorse’s best known and best loved physicians, rumored to have delivered half the population in his half century of local practice, was honored with his graduating class colleagues at ceremonies in Detroit last night.

Dr. Durocher who was president of his class, still practices in Ecorse, where he has worked from the start of his medical career. He has also served the community as Director of the Ecorse Bank, now Security Bank, since 1917.

Among well wishers were his wife, the former Sadie M. Yott, whom he married in 1907, his sons Dr. Norman Durocher of Pontiac and Dr. Raymond Durocher of Allen Park, and a daughter Mrs. Geraldine Dunaway of Cleveland.

Dr. Durocher came to Ecorse in 1913 to take over the practice of his brother Frank who had passed away and for many years, was the only physician in the Downriver Community. He was extremely proud of the fact that he had delivered over 7,000 babies during his long career.

A native of West Sandwich, Ontario, Dr. Durocher graduated from the Detroit college of Medicine and Surgery in 1912. He was a staff member of Delray General and Outer Drive Hospital and a lifetime member of the Wayne County Medical Society, and American Medical Association.

Dr, Durocher was an original member of the Board of Directors  when the Ecorse Savings Bank was reorganized in 1934. Prior to that he was a member of the Ecorse State Bank. He was awarded the additional title of vice president in 1938.

A requiem high mass was said at St. Cyril of Jerusalem Catholic Church in Taylor Township Tuesday morning. Interment at Our Lady of Hope Cemetery.