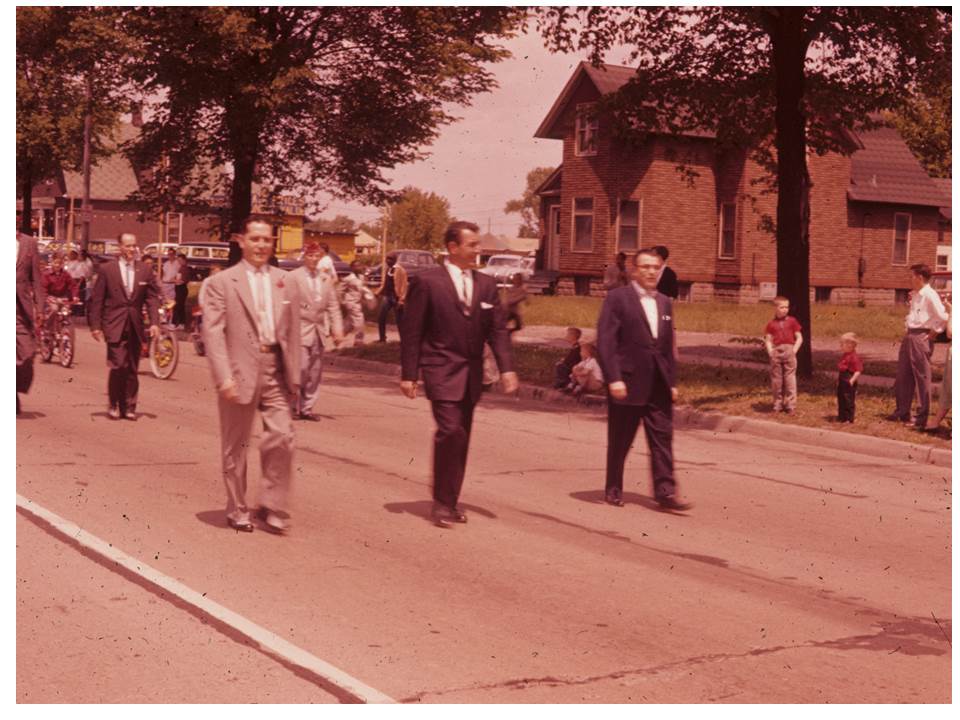 Photograph by John Duguay
These are several papers about downriver history from the 1959 Honors English Class of St. Francis High School.  The only one that has a byline is one by Lawrence Meier.  If you recognize any of these papers and especially if you wrote one of them, please let me know. I am anxious to preserve these and to give credit where credit is due.

Remember, these were written in 1959.  It's fascinating to read them from the perspective of years later.  As one of the students suggests, these papers are just a stepping stone for more research  into Downriver history. Kathy Warnes)

Ecorse in the Past

Ecorse necessarily has been mentioned many times in previous chapters, but as the starting point for most other downriver communities, its early history deserves a section all its own. A little repetition is necessary that its story be told completely.

Ecorse, formerly “River Aux Echorches,” is a city of Wayne County, Michigan, on the Detroit River, seven miles S.S.W. of Detroit, with a present population of approximately 18,000, covering an area of 2.97 square miles. It is both an industrial and residential community.

Ecorse claims a colorful background, which dates back in history as far as 1763, when it was the rendezvous haven of Pontiac and other allied Indians chiefs, namely Wyandotte, in the famous plot to rid the Midwest of encroaching white settlers. It was also known as a favorite burying ground of the local Indian tribes, who dwelt along Lake Huron and Lake Erie, thereby having easy access to Ecorse via the Detroit river, which in reality is no more than a strait between the two aforementioned lakes.

The original name, “Riviere Aux Echorches,” is derived from the early French settlers, who dubbed it “The River of the Barks,” because the Indians gathered there by a small stream to strip bark for their canoes. The French lay claim to the development of Ecorse. At present, their influence has largely disappeared from the community, leaving only certain street names, such as Bondie, Bourassa, Cicotte, Labadie, LeBlanc, and Salliotte, as vestiges of their culture. White settlements were made during the period between 1784 and 1797, probably about 1785.

The settlement at “Riviere Aux Echorches” was an outgrowth of the settlements at Detroit and Sandwich, Ontario. The first new nationality added to this French community was the Goodell family. Elijah Goodell was born in England in 1758, and came to Michigan in 1799. In 1818, he purchased a farm in Ecorse Township on the Detroit River from Louis Leduc, and settled there. James Goodell inherited his father’s farm in 1820. In 1822, he married Angelique Salliotte, a granddaughter of the original J.B. Salliotte (Saliot). The Goodell name is still very common in Ecorse.

During the early years, the settlement consisted of farms fronting on the Detroit River, between the St. Cosme Line and The Riviere Aux Echorches. North of the St. Cosme Line were the rear ends of the farms that fronted on the Rouge River. By 1810, the Campau farms were in the hands of J.B. Rousson and the heirs of Joseph Bondy, while the Salliotte farm was owned and occupied by Louis Bourassa, who married another granddaughter of J.B. Salliotte. Other claims were held by Charles Michael Campau, Antoine Bondy, Antoine Baron, Jonathan Scheffelin, and Thomas Smith.

Around this period, “Riviere Aux Echorches,” which had come to be known was Grandport, was incorporated as a village under the name of Ecorse. Alexis M. Salliotte was the first president. He was followed by Elmer R. Labadie, William A. Furgason, John Seavitt, Charles H. Riopelle, Theodore W. Salliotte, Charles L. Heide, Louis A. Seavitt, Alfred C. Bouchard, George A. Moore, William J. Goodell, Edward J. Dufour, William W. Voisine, and W. Newton Hawkins. Alfred C. Bouchard held office longer than any other president, for a period of five and one-half terms. His sixth term was interrupted by his death in September 1928. The original village officials were:  Assessor T.H. Sonvers, Clerk – C.F. Drouillard, and Trustees – A.W. Goodell, G.E. Cicotte, G.A. Raupp, J. Maurice, C. Salliotte, J. Reno, and C. Montry. There were a total of 145 voters at that time.

Geography has been a dominant factor in Ecorse’s history. Around the year 1905, it was known as “The Little Venice of the West End,” because it was a colony for resorters from the Detroit area. Those workers of limited means, such as skilled mechanics, clerks, and other small salaried men with families could easily afford to rent a cottage built on the piers of Ecorse’s “Little Venice” and enjoy the air and the cool breezes of the river—all the luxuries of a more exclusive colony at low cost. The resorters of Ecorse who had business in Detroit travels back and forth on the trolley every day. In the evening, they could fish, boat, and bathe with their families before the very doors of their homes.

The passage of the unpopular Volstead Act of 1919, brought about an era of false prosperity that, for a few years, turned Ecorse into a boom town. The boat houses along the riverfront, reminiscent of those not so far off days, when this community was the center of a peaceful resort area, became notorious “rum row” and the center of an industry that was as vicious as it was profitable for those who participated in it. Untold millions of dollars changed hands in those days.

At one time, three banks were doing a thriving business in this little town of less than 10,000 inhabitants. People made fortunes overnight and lost them just as quickly, in an era, which, although it lasted a bare half dozen years, left behind its scars that were long in healing. From sun-up to dusk, Ecorse gave the impression of being a normal residential community. However, by night, Ecorse was a changed world. Bootleggers rented home for the purpose of using them as “blind pigs,” and also barns, garages and basements to store the smuggled liquor, and to make “moonshine.”

A Canadian regulation required that the rum boats had to be clear of the liquor piers before nightfall. They could come to Canada by day as they liked, load as they pleased, and depart as they chose before sun down. But, Canadian officials insisted on early farewells. The fleet would drop down the foreign side of the Detroit River, and wait its chance. There may or may not have been unity of action among the craft. Some run-runners had only a single boat; others were commodores of a fleet of half a dozen. The coming of night stirred the fleet from its daytime torpor. Trained eyes kept a watchful lookout for appointed signals. With so many boats abroad, the signaling was complicated and hazardous. Yet, it went on nightly with much skill. Red and green lanterns were used by night on the Ecorse side of the river to signal the rum-runners’ boats on the Canadian side. Prohibition boats had operated in the disguise of rum-runners and rum-runners often turned prohibition agents for an evening. To know friend or foe on the river after dark required nicely attuned senses.

Liquor was not the only contraband. Many an alien, tied up in a gunnysack, found himself dumped into the river when danger threatened. A successful entrant paid fifty dollars to one hundred dollars for the crossing. Along with smuggling, bootleggers often staged gang wars. Those were to fight out differences and try to get their liquor and moonshine, which was stored in places mostly between the area of Visger and Southfield. It wasn’t uncommon to hear of a beating or killing. Many a home was bombed, and in this way people could always tell who had not conformed to the rules set up by the bootleggers or Federal Agents.

Approximately five hundred boats, ranging from fifty-footers and flat tubs to small power boats, were occupied in this prohibition profession. Although the preferred method was to load trucks and cars direct from the incoming boats, which required accurate timing and capable organization, there also existed another method. Houses were converted into warehouses for the storage of contraband. Several residents had underground channels, leading to their houses located within and beyond the home of suspicion.

It was not until 1933, that prohibition was finally repealed. This brought a close to this colorful and profitable era in Ecorse history. Yet, even during those “dark days,” Ecorse had been moving ahead and building for the future. On July 5, 1923, the first steel was rolled at the Michigan Steel Mill, and a new era dawned in the downriver community. At that time, five hundred men were employed in this new industry. By 1936, over eight thousand men were employed in making steel in Ecorse plants.

In 1929, construction of the Great Lakes Steel Corporation was begun. This was truly a herculean project, since the property on which it was to be erected was almost entirely swampland. The land had to be drained, and thousands of piles had to be driven into the earth to form a foundation for this huge building project. The mill was completed in 1931. The man most responsible for the success of this building venture, as well as for the subsequent success of the steel industry in Ecorse, was George R. Fink, president of Great Lakes Steel Corporation. Shortly after construction of the huge Tecumseh Road plant had got underway, Mr. Fink was instrumental in bringing about a merger that was to make Ecorse one of the leading steel centers in the United States.

Other industries came to Ecorse during the later twenties and early thirties. In 1929, the Modern Collet Co. took the plant and facilities of the Modern Manufacturing Co. The Hinkley Motors Company was replaced in the early thirties by the Shwayder Trunk Company branch plant. The plant occupied by the Great Lakes Forging Company has since been taken over by a branch of the Detroit City ice and Fuel Company. In 1925, completion of the Nicholson Dock and Terminal Company brought much needed port facilities to Ecorse, and in the early thirties, the Grasselle Chemical Company, now a branch of Dupont and Company began operations in our city. In 1937, the Bowen Products Corporation made their home in Ecorse.

Ecorse became incorporated as a city on September 15, 1941, and adopted a City Charter on January 27, 1942. W. Newton Hawkins was the first mayor. He was followed by Mayor Pro-Tem Theodore J. Marcott in 1943, when he entered military service during World War II.  Marcott in turn, was followed by William W. Voisine, Louis Parker, and the present mayor, Eli Ciungan. William W. Voisine held officer longer than any other mayor, for a period of four terms or eight years. The official population in 1950 was 17,948. The total number of registered voters is approximately 9,000.

After becoming a city, the population of Ecorse became more and more cosmopolitan, and at present, most of the nationalities that go to make up our national pattern are to be found here.