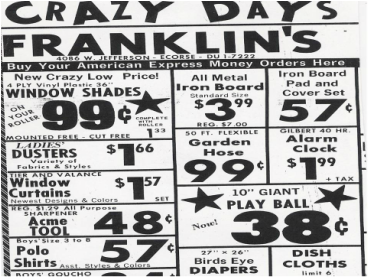 Morris "Sandy" Blakeman of Ecorse wrote a column in the Mellus Newspapers called Sidelites in the 1950s.

Nathan Gordon Gevercer came to America from Poland at the age of 12 and settled in Detroit. He began working in the variety stories during his early teens. Gevercer owned the Ben franklin 5 c to $1 store located at 4086 West Jefferson Avenue. His six years (in 1955) of doing business with Ecorse people convinced him of the business opportunities in store for those wo were willing to invest in and work hard at either new or old Ecorse business enterprises. He was a member of a large local buying group that studied the market for good quality merchandise at popular prices.

He commented that " prompt efficient service with a sincere attitude of friendliness is of prime importance to my business."

Gervercer believed that local merchants should work together to make shopping in Ecorse a real pleasure. Joint participation in holiday promotions or monthly sales will attract more interest from Ecorse people and will add new color to business actions.

Ormal Goodell was born in Ecorse in 1897, the son of Frederick and Sophie Goodell and has lived here since. In 1931, he entered business as the owner of the Goodell Hardware Company. He has been a civic leader since his young manhood and for 18 years has served Ecorse as a member of its City Council.

Goodell paints a colorful history of growth of Ecorse from a farming community to a major industrial center. He looks to the future as enthusiastically as he views the past. His reasoning is based on facts and his interest in the city is difficult to parallel.

"Ecorse was hard hit by the depression," Goodell recalls, but not as severely as other communities in this area. The steel mill was under construction during that period and provided employment for many. Most property owners managed to retain their homes.

"Property has always been a good investment here. Today, real estate is bringing higher dollars than ever before. This, in itself, indicates that Ecorse is not doing so badly. Even during business slumps it is hard to find property for sale. Real estate values seem to be increasing all of the time. With the possibility of new developments in Ecorse, there is no telling how much higher property values will climb.

"One of the strange things I've noticed through the years," Goodell commented, "is that much of the property here has been purchased with cash settlements. I can relate many instances where buyers insisted on paying cash. This, to me, is an indication the buyer is financially able and considers Ecorse property a good investment.

"Ecorse is an old community," Goodell continued, "and this means naturally that the average property owner is not mortgaged over his head. Residents of new communities that have been developed since World War II are usually burdened with heavy mortgages, thus their saving and spending power is limited. It is easy to understand why Ecorse citizens have more spending power and better bank accounts. We have more pay check per capita coming from our industries than most cities this size can boast. When the going gets tough, people want to live near where they are employed. That is another reason why property is a good investment here."

Asked to comment on Ecorse as a shopping area, Goodell said, "A suburban shopping area serves a definite purpose and Ecorse residents realize that shopping in their home town is convenient. There is one thing that must be done, however. We must provide better parking facilities. I have always been in favor of off street parking and until more adequate parking spaces are provided, our merchants cannot expect a great increase in their sales volume. There is much to be done along this line before business is improved, and plans should be made at once to start an off street parking program in Ecorse."