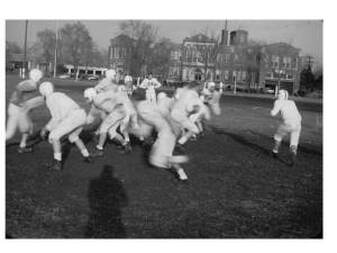 The River Aux Ecorces appears in history as early as 1763 as the retreat of Pontiac and allied chiefs in the famous plot to rid the mid-west of the encroaching white settlers. It was known also as a favorite burying ground of the Indian tribes in the locality.

It appears, however, on the evidence of birth records and of the statements of sworn witnesses in court that the first white settlements at the River Aux Ecorces were made during the period between 1784 and 1797, probably about 1785. The first settlers were Pierre and Michael Campau, who took up claims No. 85 and No. 92, immediately south of the Campau farm.

The settlement at the River Aux Ecorces was an outgrowth of the communities at Detroit and at Sandwich, Ontario. In the early years of the settlement there was very close contact with the two older towns, especially with the parish of St. Anne at Detroit, where births and deaths were recorded previous to the establishment of the Parish of St. Francis Xavier, in Ecorse about 1845, by Reverend Charles De Preiter.

By 1819 the Campau farms are in the hands of J.B. Rousson and the heirs of Joseph Bondy, while the Saliot farm is owned and occupied by Louis Bourassa, whose son married a granddaughter of J.B. Saliot. Other claims between the Saliot farm and the River Aux Ecorces are held by Charles Michael Campau, Antoine Bondy, Antoine Baron, and Jonathon Scheifelin. Beyond the fork of the Ecorse River and bordering the south branch is the claim of Thomas Smith.

The first new nationality added to this French community was the Goodell family. Elijah Goodell was born in England in 1758 and came to Michigan in 1799. In 1818 he purchased a farm in Ecorse Township on the Detroit River from Louis Leduc and moved to Ecorse.

Jonas Goodell inherited his father’s farm in 1820. In 1822 he married Angelique Salliotte, another granddaughter of the original J.B. Saliot. This is the forerunner of the Goodell family in Ecorse and its connection with the earliest settlers.

The first township meeting of Ecorse Township, which took its name from the river, was held at the home of Daniel Goodell in 1827.

The plot of the village was first recorded in 1836 after having been laid out by Simon Rousseau, A. Labadie, L. Bourassa, and P. LeBlanc. At this time it was named Grandport, but was not incorporated as a village until 1902 when the name was changed to Ecorse. A.M. Salliotte was the first president.

By 1873 the business directory included fifteen establishments as follows:

Campua and Ferguson, Grocers – S.W. Corner of State and Monroe

Goodale, G.R., Grocer- Across from Liggetts

“All along the river shores from Fort Wayne to the Village of Ecorse, some hardier folks of Detroit who like to keep cool cheaply have boat houses in which they live during the summer. “The Little Venice of the West End,” they call it, and it is truly a colony of resorters distinct in itself.

“The rich may go to Grosse Point, to the mountains or to the sea shore, those of limited means, such as skilled mechanics, clerks, and other small salaried men with families may easily afford to rent a cottage built out upon the piers of Ecorse’s “Little Venice.” There they may have the air and the cool of the river, in fact, all of the real luxuries of a more exclusive colony, and at much less cost.

“Every day the resorters of Ecorse, who have business in the city, travel back and forth on the trolley. And every evening fish, boat and bathe with the women and children before the very doors of their summer homes.”

The latest landmark in the history of the area is the change from the status of “village” to that of “city”, the incorporation of which took place in 1941 when an elected charter commission drew up a mayor-council plan of government. This started the community upon new growth and new responsibilities designed to serve better than ever the citizens of Ecorse.