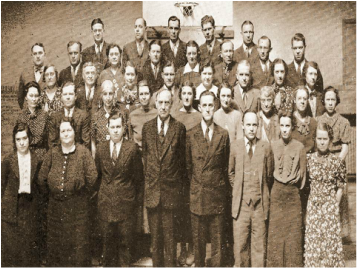 During the 40’s World War II as the event that changed the lives of everyone. I grew up in Ecorse when we moved from the south from the time I went to School 2 in the first grade until I graduated and was married. Our town was small. Everyone knew everyone. We had down town Ecorse.  There was a dime store, Slavins, a ladie’s  shop; Roths men’s, women’s and children’s clothing, Sims Men’s Wear and Plourdes Hardware.  There were doctors and dentists, a pool room, a movie theater, two drug stores, a barber shop, beauty parlor, a bank, Volmerhausens Bakery, a couple of beer stores and a few grocery stores.  There was a dry cleaners, library, coffee shop and bars.

It didn’t matter where in Ecorse you lived, you had everything you needed in town.  We had playgrounds open all summer. We did crafts, played baseball, tether ball, and checkers by the hour. From Thanksgiving on to February the streets were icy.  No salt in those days – if your car got stuck they threw ashes from the furnaces to make traction for the wheels.  It was not uncommon to see some boys hanging on the bumpers of cars and sliding all the way from Bell Street to Outer Drive.  It was painful if they hit a dry spot, but they still did it. We ice skated right on the street, but there were corner lots that were flooded.  You just sat in the snow and put on your skates.  At the Municipal Skating Rink we had a shanty with a pot bellied stove to put our skates on that was really neat.

We had an underground tunnel installed on Josephine that ran under Jefferson so the school kids could safely get to school without crossing Jefferson.  We loved to shout when under the street.  It had a great echo!

We had grade schools in every neighborhood.  Everyone walked to school. By the time I left grade school, we went directly to Ecorse High.  In the seventh grade we mixed with the higher grades.  We were mostly down stairs at the high school. Every grade school in Ecorse attended meant many new friends from other elementary schools.  It was great.

However, we were overshadowed by Pearl Harbor. When Uncle Sam said, “I Want You!”, if you had one credit to go you could finish the semester. Then on to war duty.  The Annual Year Book for 1944 has a V made up of students that were drafted or signed up before graduation. The high school put out great war efforts. We sold saving stamps to purchase War Bonds.  The Girl Reserves made bandages for the Red Cross.  We had paper drives, saved twine, saved foil, and stood in lines for nylons. We used food stamps since most everything was rationed.

Everyone pitched in and we had fun.  We had our teenage club on Thursday where we played ping pong, danced to the juke box and just hung out with classmates. Once in awhile we had a DJ.  I recall a contest as to who could swoon best to Frank Sinatra’s singing. My two girl friends and I got on stage. Two of us chose to do a false faint, but the one who won simply said, “Hubba Hubba.”  We won a pair of Bobbie sox. She won an 8 x10 autographed picture of Sinatra. I often wonder if she still has it.

We were mixed up with all the classes 7 through 12. We had a class that taught us social skills at dances. We would line up in the gym and pair up with a boy and learn to dance.  If you happened to pair up with an upper class man, you really thought you were lucky. This was really one of the reasons why you knew everyone at high school.

Our chorus went to the VA hospital to entertain the men in service who had been injured.

We had a great sports program and in 1944, the Girls Athletic Association came into being. Our band played at every football and basketball home game. Our band marched in every city parade for every holiday. The Ecorse Rowing Club kept summer activities going down at the Detroit River. We had a high school rowing crew along with spring sports, baseball and track.

We never celebrated Armistice day by having school off like St. Francis our Catholic School did. So on our lunch hour we decided that we needed to have the day off also.  Miss Jessman told us it wasn’t a good idea, but several of my 1946 friends and my self from ’47, made signs that said, “No School This Afternoon.”  We posted them on all doors. Our big mistake was that we stuck them on the doors with gum!  Our two janitors, Rose and Herman, had a fit. Needless to say, about 190 kids just read the signs and left. The next morning we were all called down to the office. We pleaded innocent but had to stay after school for three weeks for supervision under the jurisdiction of Miss Von Sprecken. Then the next three weeks we had to deal with angry parents. That was our one time trying to skip school.

We had great skip days which were supervised by Mr. Knox and Iva Studebaker.  We went to Walled Lake. We also had Bird and Biology Club where we went to the marsh and looked for birds and then back to Miss Jessman’s class where she treated us with Frost Bites which she kept in the freezer in her class. She also had a line of candy.  The ones we most enjoyed was Mallo Cups.  If you got an initial that spelled out Mallo, you got a free candy bar.  I don’t recall anyone ever getting the entire word and getting the prize.

The Class of 1947 was the only class that never had a year book. After the war there were shortages of paper and money, so we had a leaflet printed up with a few facts about 1947. I can assure you if you have one of these, it is tattered and torn by use from reunions.  I still have mine.

Even though it was war and post war time everyone in Ecorse put forth much  cooperation and worked together hoping for peace.

We are still in touch with my husband’s fifth grade teacher, Mrs. Lowney Blair who is in her 90s.  She lives in Southgate and spent her summers in Marquette where she grew up. She can be seen walking at the Southland Mall and keeps in touch with us on all holidays. She is amazing and has many memories of her early teaching days at School Two.

The classes of 47, 48 and 49 started having Class Reunions.  The first was in 1952.  We had it in the school cafeteria and then to my house after to reminisce. We started having combined reunions in 1972 and every five years and continued on until we had a reunion for all of the 1940s classes in 1992.

A group of Ecorse High Girls( we still think of ourselves as girls when we get together) have a luncheon every April and October. Everyone is invited. Having the luncheons and reunions has kept us in touch and it is always great to remember the good old days in Ecorse.  One can click their heels like Dorothy in Oz, close their eyes, and whisper “There was no place like Ecorse.”