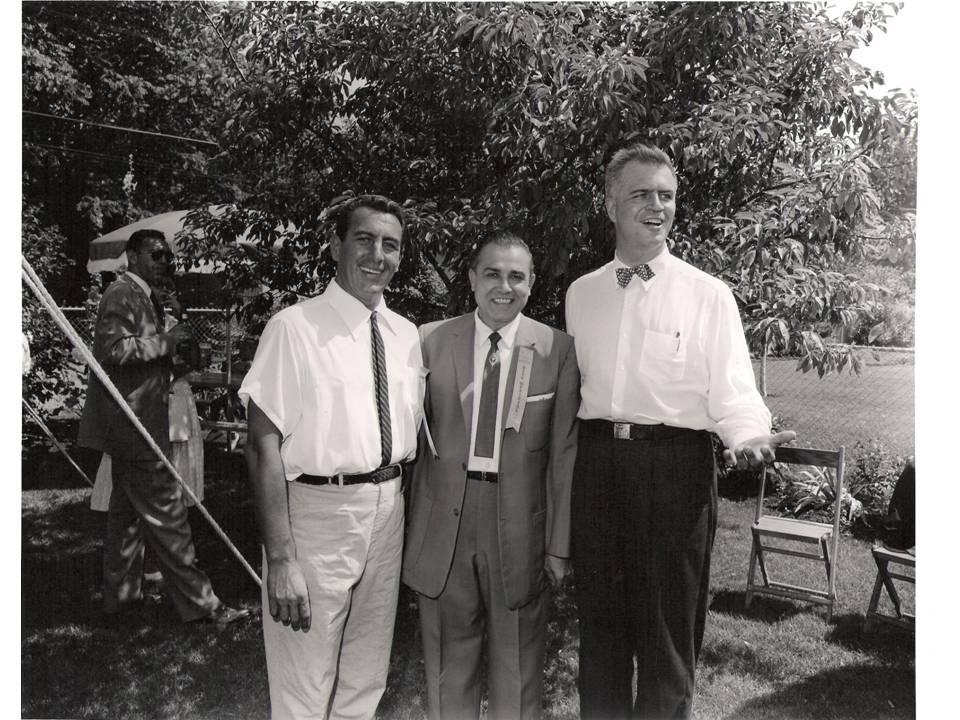 
In September  1949, the Ecorse primary proved to be as interesting and full of twists and turns as the 1949 and beyond Ecorse elections. There were 42 candidates seeking to be nominated for the fourteen city offices in the November 1, 1949, general election. The 1949 primary featured the largest number of candidates every to file for office, with 44 candidates filing petitions and paying the $25.00 filing fee. Two later withdrew. Mayor William Voisine filed his withdrawal with the city clerk and Mrs. Laura Kaigler, a candidate for council also withdrew.

There were 21 candidates for city council. Five of the incumbent councilmen were seeking reelection. These five were Ormal Goodell, Francis Labadie, Theodore Marcott, Louis Parker, and Nick Stroia. Lambert Pfeiffer didn’t file for reelection and planned to retire from public office.

The Ecorse Advertiser printed capsule biographies of each of the candidates and they provide an interesting glimpse into the lives and history of 1949 Ecorse.

Eli Ciungan, city assessor, was seeking re-election to that office strictly on his record. He was first elected City Assessor in 1947.

When he was first elected, he promised lower taxes. He increased the steel mill assessment over 14 milion dollars and made good his promise to lower taxes for home owners. He fought the attempts of the Wayne County tax officials to increase county taxes on Ecorse property.

Mr. Ciungan was a veteran and a successful businessman. He was well known throughout the city.

Robert G. “Bob” Clark was one of the eight candidates for Constable. This was Clark’s second entry into politics.

“Bob” as he was better known as, was a disabled veteran from both World Wars and for many years had successfully operated a grocery store on Cicotte Street.

Clark had been active in various clubs and organizations and had been especially interested in youth work.  He was scout master for Troop EC5, sponsored by the Kiwanis Club.

Bob Clark was pledged to good government and a fair deal for all.

Ormal Goodell, dean of the present city council, served Ecorse continuously since 1937. He was seeking his seventh term on the city council.

Mr. Goodell had an enviable record as a city councilman, having proposed or worked for all the major improvements that had been accomplished during the past 12 years.

A life long resident of Ecorse, Ormal Goodell lived at 21 Cherry Grove in 1949. He was active in the Businessmen’s Association Ecorse Goodfellows and other civic activities.

Rudy Hickey, of 74 Visger Roadm was a candidate for city council and was born and brought up in Ecorse.

Mr. Hickey graduated from Ecorse High School in 1939 and won the honor of being the school’s most valuable athlete. He continued his interest in athletics and recreation and proposed an even wider recreation program.

His was Mr. Hickey’s second entry into local politics. Two years ago he lost his race for the council by a very small margin.

He had wide business experience and was associated with Stanford Bros., Plymouth and Dodge dealers in Lincoln Park.

William Jones, a candidate for Council, was a life long resident of Ecorse, a home owner, and a graduate of Ecorse High School.

Wilson B. Koch was a candidate for re-election as Constable. He had lived in Ecorse for the past 30 years and lived at 11 West Charlotte.

He served five years as a member of the Ecorse Fire and Police Commission, three years as a deputy sheriff and as an examiner of motor vehicle operators and chauffeurs. He also served most of the downriver judges during his term as constable.

Mr. Koch had long experience as a law enforcement officer and believed his experience deserved another term.

Elmer J. Labadie, 26 East Woodward, was again a candidate for the Ecorse city council. Two years ago Mr. Labaie lost by a small margin in his campaign for the same office.

Mr. Labadie was a life long resident of Ecorse. He was born in Ecorse and was a member of one of the city’s oldest families. He graduated from Ecorse High School and was prominent in athletics.

Mr. Labadie was interested in good government and in the future of his home town. Having grown up in Ecorse, he believed he was familiar with the city’s needs.

Theodore Marcott, popularly known as “Ted,” was again a candidate for re-election to the council. Mr. Marcott lived at 28631 Outer Drive.

He had lived in Ecorse for over 25 years and was a member of the Ecorse police department for many years before he retired because of an accident suffered in the line of duty.

He served as acting mayor for nearly two years during the absence of Mayor William Hawkins. He also served as a member of the Wayne County Board of Supervisors.

Ted Marcott took an interest in the progress of Ecorse and was seeking reelection on his record as a city councilman and public servant.

Edward McGee served as a member of the Ecorse Fire and Police Commission for ten years and a term as deputy sheriff. He was running for the office of constable. Although he had long been involved in local politics, this was the first time that Mr. McGee ran for public office.

Mr. McGee was a resident of Ecorse for over 30 years. For many years he was a supervisor at Ford Motor Company. He later opened a business of his own in Ecorse. He was the manager of the Dixie Club. He lived at 26 Charlotte.

Ray G. Mell was running for Justice of the Peace. A resident of Ecorse for 25 years, he lived at 35 Knox Street.

He retired from the police department on September 1, 1949, after serving for 21 years. Appointed to the department in 1929, he worked his way through the ranks to become Assistant Chief of Police and head of the Detective Bureau.

Mr. Mell believed that his long experience in police and court work qualified him for the important office of Justice of the Peace.

Charles Montroy, better known in Ecorse as “Porky,” made his first entry into politicas by running as a candidate for Ecorse city council.

Mr. Montroy lived at 36 Florence and was a life long resident of Ecorse.

He served in the United States Army in Panama. He was a successful businessman and was engaged in both manufacturing and a retail business. He was long active in civic affairs and took an active part in Ecorse Day promotion for several years.

Mr. Montroy was president of the Ecorse Businessmen’s Association , a charter member of the Ecorse Rotary Club, and was also active in the Goodfellows.

Leo C.. Navarre, made his first entry into Ecorse politics by running against Paul Vollmar for the office of city treasurer. He lived in Ecorse for over 25 years and during that time was active in civic and patriotic organizations.

He served 18 months in the U.S. Marine Corps during the first World War War and was Deputy Chief Air Warden during World War II. He also served as Secretary of the War Memorial Fund and assisted in raising money to build the World War II War Memorial

Mr. Navarre was active in the Roy B. Salliotte Post American Legion for 15 years and served as Commander for two terms. He also served in all offices of the 16th District Association of the American Legion and was District Commander in 1942.

From 1947-1949, he was State Junior Baseball Chairman at the same time he worked as Employment Manager of the City of Ecorse and helped over 2,500 local people obtain employment.

Louis Oleksuk, known to many people in Ecorse as “Popeye,” was campaigning for the office of city assessor.

Mr. Oleksuk had been a resident of Ecorse for 32 years. He was a property owners, a businessman and lived at 220 Southfield Road. He was active in various clubs and organizations.

Mr. Oleksuk said that he believed in a fair and impartial assessment of all property in Ecorse with a resultant cut in the tax rate to save property owners money. He centered his campaign for election on such a program.

Russell Renaud, better known as “Duffy,” was a candidate for city council. Renaud lived in Ecorse all of his life and lived at 48 Bell Street.

Mr. Renaud took an active part in organized labor and still carried a membership card in Local 7. He owned a business in Ecorse and predicted a prosperous future for the city. He believed that all meetings should be open to the public and public opnion should be sought on all programs.

John Sharon was a candidate for the Ecorse City Council. He lived at 25 Benson Street with his wife and two children.

Mr. Sharon was born in Ecorse and graduated from Ecorse High School and later spent three years a Wayne University. He was a job analyst at the Ford Motor Company.

Mr. Sharon served 3 ½ years in the armed service and was awarded the Purple Heart. He was active in the V.F.W., the Ecorse Boat Club, and other organizations.

He took a keen interest in Ecorse government, followed the development of Ecorse, and was keenly interested in the future of Ecorse.

Nick Stroia, well known businessman and civic leader, sought a third term on the city council. He was first elected to the council in 1945.

Long before Nick Stroia entered politics, he was well known as a civic leader. He was one of the organizers and the first president of the Ecorse Businessmen’s Association and an original sponsor of the popular Ecorse Day celebration. He was also a member of the Ecorse Kiwanis Club.

Patrick B. Trondle, “Pat,” was a candidate for Ecorse City Clerk. He was a life long resident of Ecorse, born in Ecorse and educated in Ecorse. He was truly an Ecorse man.

Mr. Trondle graduated from Ecorse High School in 1936 and he was active in all athletics.

During the war he won the rate of master sergeant and served in an administrative capacity in military governments in Africa, Sicily, and Italy. Back from the war he was associated with Timken Axle as a rate clerk.

Mr. Trondle believed his long administrative experience qualified him for the office.

Trondle was married, lived at 18 Ridge Street, and was particularly interested in housing and in recreation.

Paul Vollmar, running again for Ecorse City treasurer, had served as the city treasuer for the past 16 years.

Mr. Vollmar was first elected to the office in 1933 and he held the office continuously since 1933. During his regime, he instituted many reforms in the treasurer’s office whose work increased steadily during the past decade.

The collection of the winter tax, water bills, the handling of the new pension systems records and the collections of the tax roll which increased at least  a 1000 percent were part of his responsibilities.

Edward A. Weiser, better known to his many friends as “Eddie,’ threw his hat into the political ring and he was a candidate for the Council. Eddie Weiser operated Eddie’s Variety Store at Jefferson and Auburn for 15 y ears and was particularly well known in the north end. He lived at 14 West Auburn Street.

Mr. Weiser served on the Ecorse Planning Commission and had taken a keen interest in the development of Ecorse.

Mr. Weiser was a successful businessman and a student of municipal government. He believed that government, like business, can be conducted efficiently and economically and still provide all necessary services.