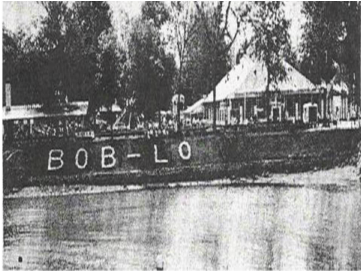 Frank E. Kirby designed the Columbia, built in Wyandotte and Detroit in 1902, and theSte. Claire, built in Toledo and launched on May 7, 1910 and entering service later that year. The Ste. Claire was named after Lake St. Clair and the St. Clair River, revealing the influence of explorer Robert de La Salle who paddled through the lake and river during the feast of Ste. Clair. The Columbia , named after Christopher Columbus, celebrated her 100thbirthday in 2002. She is the oldest steamer in the United States with the exception of ships classed as ferries.

Like all North American steamers, the Columbia and Ste. Claire are propeller driven. TheSte. Claire is 197 feet long, 65 feet wide and 14 feet deep. Her tonnage is 870 gft and 507 nrt, and her engine is triple expansion steam with 1083 horsepower.  She can carry 2,500 people and she served 81 years on a single run – a record unequalled in U.S. maritime history.  Built in Wyandotte and Detroit in 1902, the Columbia is the older of the two Bob-Lo boats. She is 216 feet long overall, and was last licensed to carry 2,500 people. She has been designated a National Historical Landmark, the government’s premier designation for historical resources. Both need restoration, and currently efforts are being made to save them and put them back on the Detroit River.

The histories of the Columbia and Ste. Claire are entertwined with an island in the Detroit River that generations of twentieth century people know as Bob-Lo Island. In the early 1700s, French priests established a Catholic mission on the island for the Huron Indians and the French christened the island Bois Blanc after the beech tress which covered the island, the “island of the white wood.” English tongues could not pronounce Bois Blanc correctly, so they corrupted the name to Bob-Lo until in 1949, the island became officially known as Bob-Lo Island. Bois Blanc, three miles long and one-half a mile wide, is located about eighteen miles downriver from downtown Detroit and is a five-minute ferry ride from Amherstburg, Ontario. In 1796, the British established a military post at Fort Malden in Amherstburg, and thousands of Indians from all tribes, journeying to trade furs with the British, camped on the island. For a time, Tecumseh, the Shawnee leader aided the British in the War of 1812, made Bois Blanc his headquarters and used it as a base to attack the American mainland.

In 1839, a lighthouse was built on the southern side of Bois Blanc to guide ships into the narrow straits behind it. Captain James Hackett was hired as lighthouse keeper and owned fourteen acres of the island on a life-time lease. In the 1850s, Colonel Arthur Rankin, M.P., bought the remaining 225 acres of the island from the Canadian government for $40.00.

During the Civil War, escaping slaves used Bois Blanc Island as a station stop on the Underground Railroad route to Canada. They landed on the beach and rested for a few hours or a few days before continuing their journey to Amherstburg and a new life of freedom in Canada.

In 1869, Colonel Rankin sold Bois Blanc to his son, Arthur McKee Rankin who starred in the New York theatre and belonged to New York’s fashionable set. He built himself an elaborate estate on the island, stocked the grounds with deer, wild turkey, and elk, built extensive stables and treated his New York friends to Bois Blanc hospitality. Eventually his stage career ended and he was forced to sell the island to partners Colonel John Atkinson and James A. Randall. Colonel Atkinson’s heirs sold the island to what then was the Detroit, Belle Isle and Windsor Ferry Company. In 1898, the Bob-Lo Excursion Line was created and the island developed as a resort. At the onset, the attraction of Bob-Lo was a day on the Detroit River and a picnic in the pastoral beauty of the Island. Henry Ford commissioned Albert Kahan to design and a dance hall, which in 1903 was billed as the world’s second largest. A carousel provided music and rides.

The boat ride to Bob-Lo contributed greatly to the island’s mystique. The boarding dock in Detroit started out at the foot of Woodward, but moved to behind Cobo Hall. The Bob-Lo boat also stopped at down river communities like Ecorse, Wyandotte, and Trenton. The boarding dock eventually moved to Gibralter in 1991.  It took just over an hour to voyage to Bob-Lo Island and Captain Bob-Lo and many bands and other entertainers made the voyage seem as brief as a toot of the Bob-Lo boat whistle. The bands on the second deck dance floor changed with the times – from Mrs. Walpola’s turn of the century music to the 1940s big bands to the Latin Counts of the 1980s. The Brownings hired Captain Bob-Lo, alias Joe Short, from the Ringling Brothers Circus to entertain the children on the Bob-Lo cruise and he did just that between 1953 and 1973.. He always wore an oversized hat, binoculars and handed out coloring books and small toys to the children on the trips. Captain Bob-Lo worked on the Bob-Lo boat until 1974 when he retired at age 90. He died in 1975, still singing the praises of Bob-Lo.

There were also moonlight cruises on the Bob-Lo boats. To teenagers and older romantics, the combination of the soft summer breezes, moonlight on the river, and that special person next to you made an unforgettable experience. Often, the Bob-Lo boat would just travel down the river to Bob-Lo Island, arrive there about 10:00 p.m. and turn around, but that was enough for an unforgettable evening.

The American government made an unprecedented exception for draft-age men during World War I. The law said that draft age men could not leave the country (Bob-Lo is a Canadian island) but officials decided that it would be too much of a hardship for young Michigan men to be forbidden to go to Bob-Lo with their sweethearts during the summer. The Great Depression of the 1930s stopped the national economy in its tracks and the Bob-Lo excursions as well. Then Franklin Delano Roosevelt’s 1933 inauguration brought new hope and returning prosperity to the nation and in 1935, the Bob-Lo boats resumed their river runs.

Financial trouble loomed for The Detroit and Windsor Ferry Company again in 1949. Arthur John Reaume, the mayor of Windsor, suggested that the island be turned into a national park, but the Browning family of Grosse Point, owners of a steamship line, bought the island and the boats. The Brownings turned Bob-Lo into an amusement park, building rides, roller coasters, and a funhouse. They installed a Ferris wheel, a dance hall, and an antique car exhibit. They brought in 300 exotic animals for a zoo, leading off with Socrates II, a giraffe. They built a mini railroad for rides around the island. In 1961, the Brownings replaced the island landing dock with the deck of the freighter Queenston, sunk in place. In 1973, they built the Thunder Bolt roller coaster of steel and it was one of the largest in the country. Another popular ride was the flue, a log carrying riders down a water slide. In 1975, the Brownings restored the original 48-horse carousel from 1878, and it delighted children and adults alike until it was sold off piece by piece at auction in 1990.

The Brownings sold Bob-Lo Island in 1979 and it passed through the hands of several owners, including the AAA Michigan. Rowdiness on the boats and on the island in the 1980s caused the crowds to keep diminishing, and when Canadian police and immigration officials spent a day in 1987 rounding up members of the Outlaws motorcycle gang, the end of a 90-year era drew nearer. In January 1996, the steamers Columbia and Ste. Claire, which had carried as many as 800,000 visitor to Bob-Lo Island every year in the glory years in the 1960s and 1970s, were auctioned off.

Last Trip on the Columbia

Jo Santoro Cialkowski, a life-long resident and historian of the downriver area, captures what the Bob-Lo boats have meant to thousands of people. She recalls the days of her youth in the 1920s and 1930s when a day at Bob-Lo was like the Fourth of July and Christmas together.  The Columbia docked at the foot of Southfield Road and West Jefferson at that time, and she and her friends and family waited impatiently on the dock straining to hear the Columbia’s whistle.  She tapped her foot to Finzell’s live band playing “Up A Lazy River.” She remembered the picnics, and games, riding her favorite pony on the merry-go-round and screaming as she rode the cantankerous “Whip”. In her teens, she rememberd dancing at the Bob-Lo Island dance hall. As the Columbia neared the Ecorse Port, she recalled men taking off their straw hats to dance with the ladies as everyone waltzed on the Columbia’s deck all the way back to the Ecorse port.

Jo concluded her remembrance of the last cruise of the Columbia in 1991: “ At the dock, my eyes lingered for a long while as the Columbia horn blared “good night” and drifted off into the night, not knowing then that it was a lonely goodbye. Waving adieu with both arms, I walked away from the park and headed for home. It is my fondest hope that the SS Columbia, queen of the Detroit River, will be off to the seas again.”

Both the Columbia and the Ste. Claire are National Historical Landmarks, because they are among the last steamers of their type on the Great Lakes. Columbia’s machinery survives almost intact from 1902 which is quite rare in Great Lakes ship history. TheColumbia and the Ste. Clair also are an important part of the individual historical memory of countless people in the Detroit River region. Both boats made their last trips to and from Bob-Lo on Labor Day 1991. Since then their story includes Michigan weather and rust, crud, holes, wear and tear, and even thieves.

The Friends of the Bob-Lo Boat Columbia is a non-profit organization that is attempting to acquire the Columbia and restore her for excursions on the river. If the Columbia is restored to her former grandeur and returns to service, she will be the last classic excursion steamer in service in America and the last operating ship of her kind in the world.  As the Friends of the Bob-Lo Boat Columbia say, “Bob-Lo Amusement park may be gone forever, but the fun, excitement, and beauty of a trip on the river aboard a turn of the century steamboat will be available once again.”

A non-profit organization also owned the Ste. Claire with the goal of restoring her until a Cleveland businesswoman, Diane Evon, bought her in 2001. Evon too, has the goal of restoring the Ste. Claire for some kind of public use.  She arranged to have the Ste. Clairetowed to drydock in Toledo where its hull was repaired. She had other restoration work done and the ship spent September and October of 2002 in Toledo as a Halloween attraction. Eventually, she visualizes the St. Claire as a floating restaurant, dinner theater or conference center along the Detroit River or on Lake Erie.

The restoration of the Ste. Claire and the Columbia will be a race against the ravages of time and the necessity of buying enough time to raise sufficient funds to restore them. By all accounts, Frank E. Kirby was a modest, unassuming man who did not seek public acclaim, although the scores of ships that he designed won him well-deserved acclaim. Passing years fade memories of Frank E. Kirby, but two of his steamers still survive and can still be reclaimed from the ravages of time. Frank E. Kirby would immodestly back the effort to restore the Ste. Clair and Columbia so that 21st century people can reap the benefits of his creative genius.