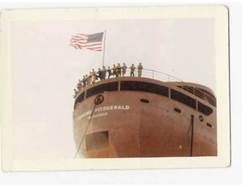 In 1905, Beeson’s Marine Directory of the Northwestern Lakes reported that Great Lakes Engineering Works was busy building eight large lake freighters, six of them at Detroit and two at St. Clair, Michigan. They were also building a drill scow equipped with special machinery for the Dunbar & Sullivan Co. of Buffalo, New York.

Designers and BUILDERS of Steel Ships For Passenger and Freight Service

Made Either Sectional or solid Hydraulic Dredging Machine

The Great Lakes Engineering Works also did custom refitting makeovers on already existing boats. In June 1906,  Mont. Tennes and his backers paid the Great Lakes Engineering Works $20,000 for the steamer John R. Stirling that they planned to use as a floating pool room to compete with the City of Traverse. The Stirling was formerly the freight steamer Vanderbilt that had traded in the package freight business between Chicago and Buffalo. Tennes and his backers estimated that they would have to pay out another ten thousand dollars before the Stirling was ready for service. They planned to add a cabin on the upper deck and make other changes so that the ship could accommodate 1,500 people.  The owners had secured a landing place for the Stirling in the Chicago River east of the Rush Street bridge and Captain George Tebo, lately in the vessel fueling business on the Chicago River, was to be master of the J.R. Stirling.[3]

The 356-foot R.W. England was the first ship that Great Lakes Engineering Works launched in 1904. Later the England became the Frank Seither and still later the Fontana.The Fontana stayed in service until 1960 when she was sold to Marine Salvage of Port Colborne and scrapped at Hamilton, Ontario. Great Lakes Engineering Works launched its  last ship on November 7, 1959 when the Arthur B. Homer, at 730-feet the largest ship on the Great Lakes, rumbled sideways down the ways while an estimated 10,000 spectators cheered.

The Arthur B. Homer was the heaviest ship side-launched since the ill-fated Great Eastern, a 693-foot iron vessel was launched in the Thames River at London, England on January 31, 1858 and was the largest ship permissible under Corps of Engineers regulations for the Soo Locks and St. Lawrence Seaway. The  Homer cost more than $7 million dollars and was the last of a three year-three freighter construction project at Great Lakes Engineering.  The Homer’s sister ships were the 729-foot Edmund Fitzgerald, launched on July 7, 1958 and the other the 689-foot Herbert C. Jackson which was completed on February 19, 1959. The Great Lakes Engineering works developed the system of prefabrication and final assembly that enabled shipwrights to build the three vessels in three years.

The ships that Great Lakes Engineering Works built and launched in between the Englandand the Homer  were just as distinctive as the William G. Mather’s  longevity it was delivered in 1906 and scrapped in 1996- and the Homer’s length.. In November 1904, the Great Lakes Engineering Works yard in Ecorse launched its second vessel, the large car ferry Detroit, build for the Michigan Central Railroad to maintain uninterrupted service between Detroit and Windsor. The Detroit Free Press account of the launching said that the Detroit took to the water in style, “sending a giant wave across the marsh to the accompaniment of two thousand cheers and a shrill salute from every steam whistle within hearing distance.”[4]

Miss Elizabeth Pessano broke the bottle of sparkling champagne against the bow of the ferry and said, “I christen thee Detroit.”  The big ship plunged into the water and another Great Lakes Engineering ship joined the Great Lakes fleet.[5]

The Jacob T. Kopp, launched on December 7, 1907, was named for a prominent banker and businessman of York, Pennsylvania and constructed to the specifications of the Pennsylvania Steamship Company.  Its double water bottom foreshadowed the idea of the “unsinkable” Titanic, just five years in the future.  The Kopp was a bulk freight carrier, 500 feet long over all, 480 feet length of keel, 54 feet beam and 30 feet deep. She was built on the improved arch construction principles, having double water bottom and vertical side tanks that extended upward from the water bottom. This permitted a large amount of ballast water when the steamer ran light and provided a decided advantage in case of storms.  One week from her launch, the steamer’s engines and boilers and all auxiliary machine had been completely installed and the boilers were under steam. This was a record pace for the time.[6]

During World War I, the United States Shipping Board ordered at least 60 cargo ships from Great Lakes Engineering Works to transport ore from Lake Superior to the voracious Midwestern blast furnaces that produced steel needed for the war effort.  The cargo ships also transported grain and other products between the lakes and some were sold to other countries to become part of their merchant marine fleets. The Crawl Keys, built in Ecorse in 29 days in 1918, was a cargo ship that traveled the lakes.

Bert Belky, a shipbuilder for fifty years, lived in River Rouge. He worked as a riveter and when he was 65, he  retired and went to work for Fleetwood, a local company. During World War I, Belky was the world champion riveter. In those days welding was used and there was a drive on to see who could rivet the fastest all over the world. Belky won by driving 1,675 rivets a day. From the Rouge-Ecorse Great Lakes Engineering shipyard, he traveled all over the country building ships and he even helped build the Detroit-Windsor tunnel.

Belky kept copies of “The Great Lakes Record”, a small magazine published by and for the employees of the Great Lakes Engineering Works. The February 1920 issue recorded these events as happening at the yard.

A succession of jobs has been keeping the repair department at the Ecorse yard going at top speed. As soon as one ship was repaired and removed from dry dock another ship took its place…for the opening of navigation is not far off and the work must be finished in quick time. [7]

In World War II, the government commissioned the Great Lakes Engineering Works to build an entire fleet of ore carriers – the largest in the world at the time- to rush ore from the Lake Superior ranges to the lower lakes steel mills to meet wartime steel needs.   The shipyard built at least ten ore carriers and three lakers to help in the war effort.  Many of the cargo ships that Great Lakes Engineering had built before and after World War I turned up in World War II merchant marine fleets. The Lake Ellithorpe was sold to Britain and eventually torpedoed, as was the Craycroft under her new name, Fred W. Green.

A family from River Rouge, Mayor and Mrs. John F. McEwan vividly recalled the launching of the Fitzgerald as a very special day for them. Several days before the launching their three-year-old son John had been hit by a speeding truck and had to spend several days in the hospital. He was discharged from the hospital just as the Fitzgeraldwas due to begin its career. Mayor and Mrs. McEwan wanted to do something for John to celebrate his homecoming so the entire family went down to the foot of Great Lakes Avenue and watched the Fitzgerald being launched.[8]

As the Edmund Fitzgerald slid into the Detroit River at 12:40 p.m. on June 7, 1958, whistles blew loudly from yachts, sailboats, outboard boats, fishing boats, scows, tugs and freighters lining the waterfront to salute the launching. Airliners, military planes and two helicopters hovered overhead. When the launching was completed, the tug Marylandmoved full speed ahead to keep the Fitzgerald from swinging against the banks of the launching basin. The Maryland quickly snubbed the Fitzgerald to shore where she remained until August when her cabins would be completed and her smokestack installed.[9]

Her service years proved that the Great Lakes Engineering Company had built theFitzgerald well. The only major work ever done on her was the installation of a bow thruster in 1969 and converting her to oil fuel and fitting automated boiler controls during the winter of 1971-1972.  The Fitzgerald set a number of cargo records over the years and was a favorite of ship watches because of her attractive appearance and the antics of her longtime master, Captain Peter Pulcer, who consistently entertained anyone he thought was watching the him and his ship.

On November 6, 1975, the Fitzgerald passed the Ecorse and River Rouge shores headed toward Minnesota. She left Silver Bay, Minnesota about 1:30 p.m. Sunday carrying a cargo of 30,000 tons of taconite She cleared Superior, Wisconsin on November 9, 1975, bound for Great Lakes Steel Corporation in Ecorse, just a few yards away from where she had been launched. On the night of November 10, approximately 17 miles from the entrance to Whitefish Bay, she encountered heavy Lake Superior weather and sank with all 29 of her crew, including Captain Ernest McSorley of Toledo, Ohio, who had commanded her since 1972. Later, the broken hull of the Fitzgerald was located in 530 feet of water, the bow and stern sections lying close together.

Back at her birthplace on the Detroit River, Mayor McEwan and his son John stared at the River, and watching the Fitzgerald gliding into her home port in wistful imagination’s eye.  Gordon Lightfoot etched the Fitzgerald’s epitaph on the minds and hearts of many when he sang:

In a musty old hall in Detroit they prayed In the Maritime Sailor’s Cathedral,

The church bell chimed ‘til it rang 29 times For each man on the Edmund Fitzgerald.[10]

The literal and figurative bells rang in Ecorse and River Rouge as well.

[10] The Wreck of the Edmund Fitzgerald, by Gordon Lightfoot 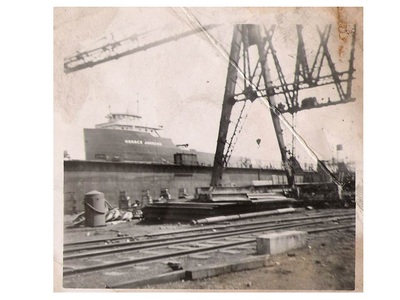 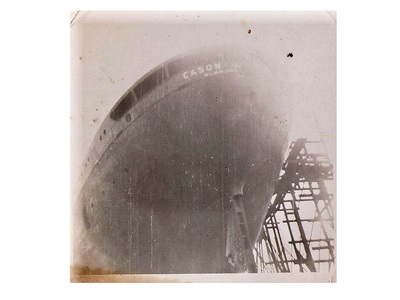 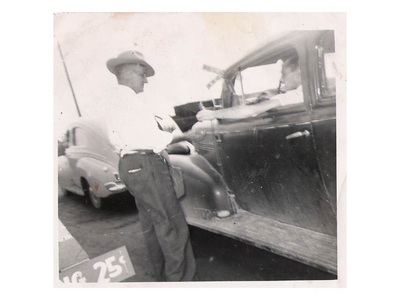 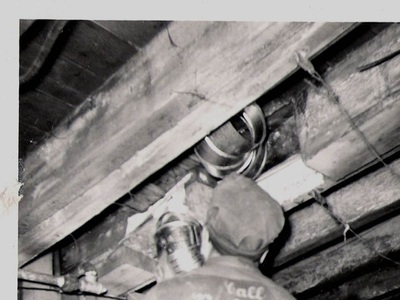 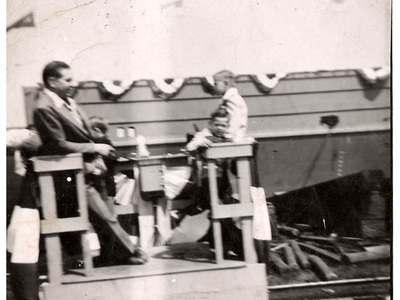 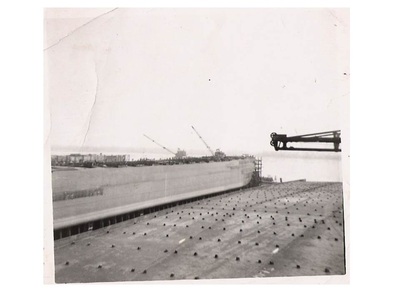